Gase, frustrations and struggles all remain for 0-6 Jets 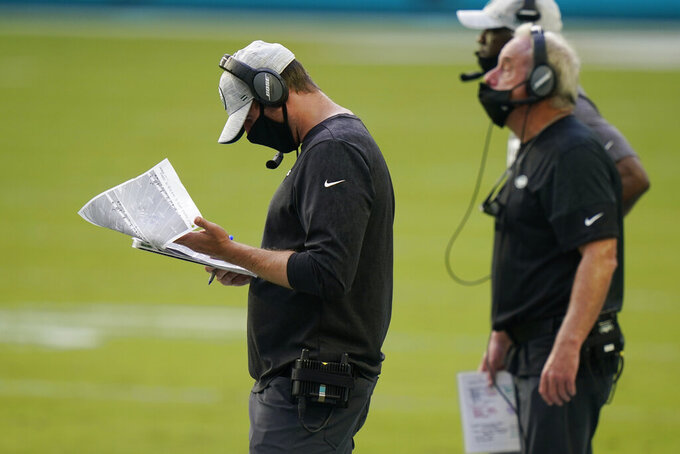 NEW YORK (AP) — Frustrated fans woke up Monday morning to the reality that things remain the same for the New York Jets.

In a word: painful.

Adam Gase is still the coach. The offense is still struggling. So is the defense. Special teams, too. But, hey, at least the 0-6 Jets are now “winning” the slow crawl to the No. 1 overall draft pick. Whether that ends up being Clemson quarterback Trevor Lawrence remains to be seen.

One thing's for sure, though: This season has been tough all around.

“You can get all caught up in the emotions of this game and the outside noise of the fans, but no one cares more than the guys in the locker room,” guard Greg Van Roten said. “This is my job. I get paid to play football. I love this game and I want to go out there and play a perfect game every week. It's incredibly frustrating when you lose a game.

"It's even more frustrating when it's not even close because you have a short window to do this as a professional athlete.”

Van Roten, a native of Long Island, grew up a Jets fan and said his father Thomas has followed the franchise for nearly 60 years.

“As frustrated as the fans are, I understand that, but I'm way more frustrated than you are because this is a year of my playing life that's not going the way that you want it to go,” said Van Roten, in his first season with the Jets. “Dealing with that, you allow yourself to do your job and this is what you get paid to do, so you've got to find a way to stay positive, block out that noise and just play a good game the next time you get to go out there.

"Because, eventually, there's not going to be a next time.”

Van Roten credited the embattled Gase with trying to find different ways to turn things around, from when they've met to how they've communicated and who has attended meetings. He said the coach showed about 30 plays Monday of Sunday's 24-0 loss at Miami to understand what the players were thinking in those situations and how they can all improve moving forward.

“You don't want to show up on a Monday and it's the same as last week and the same as the week before that when you're not being successful on Sundays,” Van Roten said. “He is doing everything he can do to make sure we're all set to go for our next opponent.”

Joe Douglas' cellphone. With the Jets' season spiraling, the fire sale is officially on.

Last week, the general manager tried finding a trade partner to move Le'Veon Bell before ultimately releasing him last Tuesday. After the game Sunday night, Douglas agreed to deal veteran nose tackle Steve McLendon to Tampa Bay. The Jets also sent a 2023 seventh-rounder to the Buccaneers in exchange for the Buccaneers' sixth-rounder in 2022.

Douglas is likely not done, especially with plenty of time before the NFL's trade deadline on Nov. 3.

Well, everything. But one key area that has been brutal: third-down efficiency. The Jets were an awful 2 of 17 in those situations at Miami, a major reason for their inability to get on the scoreboard.

But it hasn't just been that game. New York is last in the NFL with a 30.23% conversion rate on third downs.

Marcus Maye. The safety provided one of the season's lone highlights when he intercepted Ryan Fitzpatrick by pinning the ball against his backside while on the ground — The Butt Pick — and then securing it behind his back. It was an athletic play for Maye, who was moved this week to the deep safety role while Bradley McDougald was switched to the strong safety spot.

Flacco. The 35-year-old quarterback hasn't been able to do much in Sam Darnold's place to get anything going on offense. Against the Dolphins, he was 21 of 44 for 186 yards with an interception and two penalties. He also lost 28 yards on one of his three sacks.

“I definitely made some mistakes and have got to clean some things up and keep on going,” Flacco said. “But we’re playing in some really tough conditions right now and we’ve just got to keep getting better.”

In addition to Darnold and LT Mekhi Becton, LG Alex Lewis has what Gase says is “multiple” shoulder issues and is week to week. ... OL Chuma Edoga has a calf injury. ... S Matthias Farley has a sprained ankle. ... LB Frankie Luvu could miss time with a groin injury.

0 — The number of points the Jets scored against the AFC East-rival Dolphins. It marked the first time New York was shut out by Miami since losing 14-0 in the AFC championship game in January 1983.

Could things get worse? Oh, yeah. The Jets' schedule is tough over the next several weeks: home vs. Buffalo, at Kansas City, and at home vs. New England on a Monday night before the bye-week break. For the record, no Jets team has started 0-9. Not even the 1996 squad, which opened 0-8 on its way to a franchise-worst 1-15.