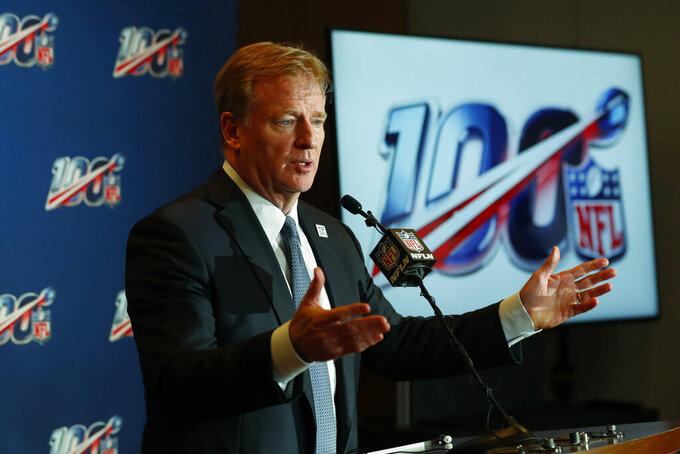 Through Week 6, the league has had 44 reviews related to pass interference, and the on-field ruling was reversed seven times.

"I think coaches understood replay was not going to correct every pass interference close call," Goodell said Wednesday at the close of the two-day owners' meetings. "It's not possible to make it perfect, and we're not re-officiating these plays. The thought process was to correct the obvious and clear error. I think it's settling out where we expected."

The new rule approved as a one-year experiment allows pass interference calls or non-calls to be challenged by coaches and reviewed via replay. But complaints by coaches, players and fans about pass interference persist, with some arguing more calls should be reversed.

When the rule was adopted last spring, Goodell said, coaches understood that close calls wouldn't be changed. The reversal rate so far is 16 percent.

"Whenever there's a rule change, there's a period of adapting, and coaches are testing to see what types of changes are going to be made," Goodell said.

Rich McKay, Atlanta Falcons president and a member of the NFL competition committee, said it's too early to judge whether interference reviews are being handled properly. But he agreed with Goodell that the goal was to reverse only egregious mistakes.

"It's got to be an obvious error," McKay said. "It's a brand new rule, one our coaches, players, fans and officials are getting accustomed to."

Officiating has been a hot topic this season, with controversy about pass interference, the rate of holding penalties and, most recently, a critical call in Monday's Lions-Packers game that the league admitted was wrong.

The erroneous hands-to-the-face flag tainted Green Bay's 23-22 win. But Goodell said such controversy is part of any sport.

"You never want to see a game where people are talking about officials afterward," Goodell said. "It was a great game played by two great teams surprising people about the way they're playing. And it's tough. We have to continue to do everything to improve.

"But that's sports. You see it in every sport."

On other topics, the commissioner said:

— Labor discussions on a new collective bargaining agreement have touched on the possible expansion to a 17-game season. The Super Bowl would be one week later, and the season would still start the week after Labor Day. Larger rosters might accompany a longer season.

Goodell said the CBA talks have been productive, but he declined to predict when a deal might be reached.

— Despite the Miami Dolphins' historically bad start during a rebuilding effort, Goodell said he's not concerned about teams sacrificing a season for a high draft pick and diminishing the NFL's competitiveness.

"The good news for us is we don't see that," he said. "I don't think the league has ever been more competitive. You can see that in teams going from last to first in dramatic fashion."

Goodell said he doesn't believe competitiveness would be improved by a lottery for draft picks, and such a change hasn't been proposed by owners.

— The league will examine possible reasons for a 44% increase in concussions in exhibition games from 2018 to this year. Concussions in preseason practices fell by 33%.

"We can look at the video, we can look at the medical information and try to understand the exact circumstances and see if there's a trend or something we need further changes on — whether it's preseason policies or techniques we want to remove from the game," Goodell said.