Hulk Who? AEW dishes out punishment as it hits 1-year mark 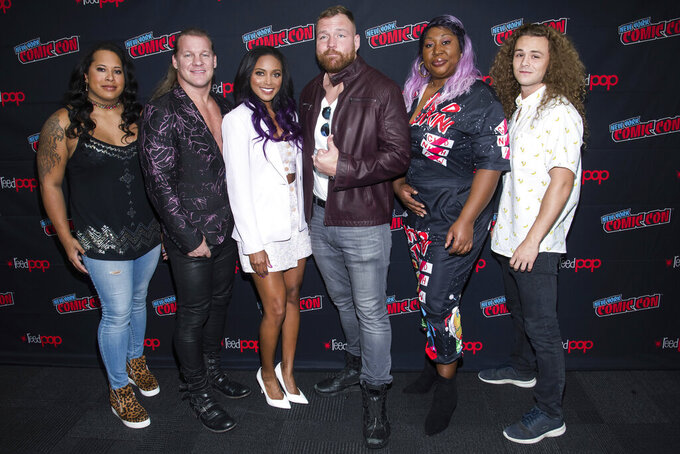 Cody Rhodes s tood bloodied atop a 20-foot high steel cage, steadied his nerves and attempted a foolhardy moonsault -- in laymen terms, a backflip splash -- onto his waiting opponent.

The move, in a way, symbolized Rhodes’ gamble to help create a professional wrestling company that, with some risk and a few twists, has stuck the landing and delivered on its promise to revitalize the industry.

Break out the bubbly and add a splash of OJ, because All Elite Wrestling is set to celebrate its one-year anniversary with Wednesday night’s show from Daily’s Place in Jacksonville, Florida.

The 35-year-old Rhodes, son of wrestling legend Dusty Rhodes, has been along for the ride from the genesis of the company to its spot as the must-watch show in wrestling. AEW has not only emerged as a rival to the decades-long dominance of sports-entertainment power WWE, it gets a three-count on the ratings chart against the WWE’s counterprogramming show “NXT” most Wednesday nights.

Rhodes, fellow stars Kenny Omega and The Young Bucks (brothers Nick and Matt Jackson) star both in the ring and behind the scenes in executive roles. Tony Khan, the son of Jaguars owner Shahid Khan, is the founder, president and CEO of AEW and helped steer the promotion toward a renewal by WarnerMedia of its “Dynamite” program through 2023 only months into existence.

Rhodes said it didn’t take long for AEW in both match quality and storytelling to prove a worthy alternative to WWE.

“We reached that goal within one ‘Dynamite,‘” Rhodes said. “I think the secret formula there is really just authenticity. The products are vastly different. I think we knew right out of the gate that the alternative wrestling brand that we had talked about and promoted, but was really sight unseen to that point, really ended being correct. We were vindicated that there was this audience that wanted something different from their wrestling and that has been the audience since day one.”

The company also has the show “AEW Dark,” with new episodes starting Tuesdays on AEW’s YouTube channel, and TNT has committed to another hour of programming that will not be connected to “Dynamite.”

The two hours of national cable exposure still pale to the seven hours each week produced by WWE, leaving time tight to fit in a loaded roster where fighting for air time means more than fighting for a championship bout.

The “NXT” vs. “Dynamite” showdown hasn’t quite reached the hostility of the Monday Night Wars of the late 1990s -- think of it more like a Wednesday Night Tussle -- but AEW has kept its ratings steady, even as the industry wrestles with the best way to put on shows during a pandemic where fans at live events are scarce.

AEW opened the year averaging at least 900,000 viewers before the pandemic took a bite out of viewership numbers. When “NXT” was temporarily bumped from Wednesday in the late summer for other programming, AEW hit 1.016 million viewers for the Sept. 9 episode. AEW, which also wins the advertiser-coveted 18-49 demographic, drew at least 835,000 viewers each of the next three weeks.

“When you hit that million mark, and even on the nights where the average might be in the eights or nines, there are segments that go over a million and it certainly begets the question: What would this be like unopposed?” Rhodes said. “But opposed, it’s doing just so damn fine. I think we have a good indicator. We’ve seen what it looks like. But competition is not something we’re shying away from by any means. Wednesday night is our home.”

AEW — which packed the anniversary edition with four championships defended on the two-hour show — has attracted young fans by making names out of blossoming talent such as MJF, Orange Cassidy and Darby Allin. And there’s no doubt the former WWE talent — Rhodes, Chris Jericho, AEW world champion Jon Moxley, Miro, Brodie Lee, Jake Hager, Shawn Spears, Taz, the list reads like a WWE 2K15 game — has aided in the familiarity factor for lapsed fans. Mike Tyson has stopped by and teased a future match with Jericho.

“I definitely would not close the book on Iron Mike,” Rhodes said.

Adding to the authenticity, AEW keeps track of wrestler’s records for its championship ranking system — most winning percentages this year better than the Khan family’s Jacksonville Jaguars.

AEW has been fortunate to run shows each week at the amphitheater connected to the Jaguars’ stadium and roughly 600 fans were in attendance for last week’s episode. Rhodes said AEW will remain in Florida, though the website lists the next travel date as Dec. 2 in New Orleans.

“Tony and all of us have agreed that we’ve got to do it slowly and we’ve got to do it securely,” he said. “It is only 15% (of capacity) but it feels so good to have that 15% back. We know on the other side of that glass is millions at home across the world. But it’ll be slow and it’ll be secure.”

AEW just hopes it can pack an arena for the second anniversary show — and many years beyond.