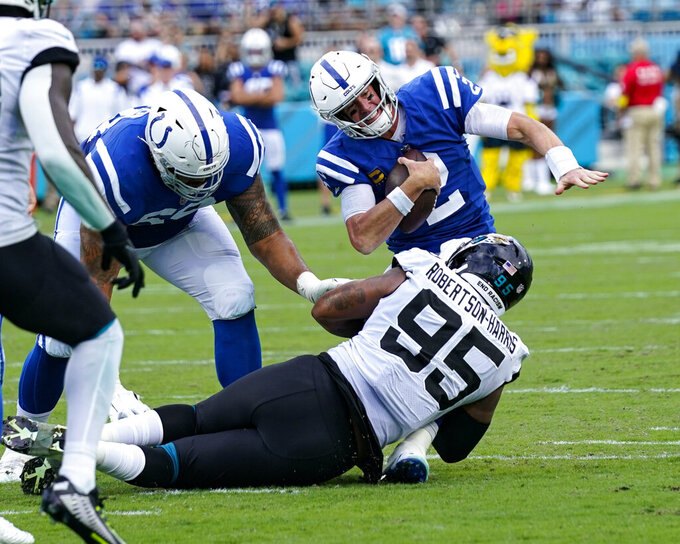 He saw the talent. He felt the commitment. He even allowed himself to believe the unit could be special.

Now, four months later, Jenkins is more convinced than ever. And he's hardly alone after the Jaguars dominated Indianapolis for their eighth shutout in franchise history.

“I’m proud," Jenkins said. "I think we can keep it going. I feel it. This is a whole new team. I can’t even ... it's just completely different. We got the guys in here to do it week in and week out. We got some dogs in here.”

The Jaguars (1-1) sacked Ryan five times, intercepted three of his passes and held reigning NFL rushing champion Jonathan Taylor to 54 yards. Each of Jacksonville's past three shutouts have come against Indianapolis (0-1-1), which hasn’t won here since 2014.

Indy also failed to score against Jacksonville in 2017 and 2018. It's the only times the Colts have been shut out in the past six seasons. Equally telling about this series: Jacksonville is 6-30 in its past 36 games, and four of those victories came against the Colts.

The latest one was never in doubt and gave coach Doug Pederson his first win with his new team. Veteran receiver Marvin Jones presented Pederson a game ball in the locker room.

“It's special," Pederson said. "It's my first win, obviously, as the head coach here. But it's a team win. We celebrate as a team. I appreciate that. It will definitely go on the mantle at the house. But my hat's off to the guys in the locker room. They're the ones that did it. I didn't get hit. I didn't have to throw any passes or run the ball.”

James Robinson ran 23 times for 64 yards, including a 37-yard TD scamper in the first half that showed he’s fully back from a torn Achilles tendon sustained last December.

“All we want is respect, and that’s that," Jenkins said.

They should have it now, even though the Colts played without three key starters: All-Pro linebacker Shaquille Leonard and receivers Michael Pittman and rookie Alec Pierce.

Ryan had been 4-0 against the Jags. But he will surely feel the effects of his first loss against them. His jersey was covered in dirt and grass stains, and he was slow to get up after several hits late in the game.

“You never at the beginning of the year think you’re going to be 0-1-1 after two weeks," Ryan said. "We are where we are. I think being realistic about where we’re at and what we need to do to improve is important. It has to be brutal honesty and we’ve got to find ways to play the way that we’re capable of, and it starts with me.”

The Colts had two fourth-quarter drives in the red zone. They had first-and-goal at the 4 and first-and-10 at the 11. A penalty, a sack, five incompletions and countless pressures kept them out of the end zone.

Reich fell to 0-5 in Jacksonville, a dubious skid that surely won’t sit well with team owner Jim Irsay. Indy blew a chance to make the playoffs last season by losing the finale in Jacksonville.

Players and coaches spent the past eight months waiting for this rematch — and then were essentially no-shows.

Colts FS Julian Blackmon left the game in the first half with a shoulder injury but later returned. ... Jaguars CB Tyson Campbell missed a play in the fourth quarter.

Jaguars: Travel cross-country to face the Los Angeles Chargers next Sunday. Jacksonville has lost 15 of 18 games in the Pacific time zone.