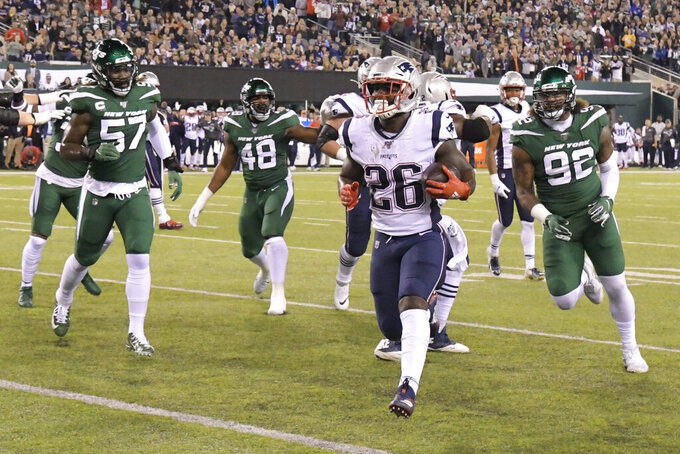 New England Patriots running back Sony Michel (26) gets away from New York Jets' C.J. Mosley (57) and Leonard Williams (92) for a touchdown during the first half of an NFL football game Monday, Oct. 21, 2019, in East Rutherford, N.J. (AP Photo/Bill Kostroun)

FLORHAM PARK, N.J. (AP) — The New York Jets are concerned linebacker C.J. Mosley could be dealing with more than just a groin injury.

Mosley played Monday night for the first time since straining his groin in the season opener, but clearly wasn't 100%. He lacked his typical burst and had just three assisted tackles in the 33-0 loss to New England.

"Doctors are doing a really deep dive, just trying to figure out where things are coming from," coach Adam Gase said Wednesday. "It might just be more than the groin. We're trying to figure all that stuff out."

Mosley had a spectacular debut with the Jets in the season opener after signing a five-year, $85 million deal in the offseason. He had six tackles, returned an interception for a touchdown and recovered a fumble, but injured his groin in the third quarter of the 17-16 loss to Buffalo while breaking up a pass in the end zone.

Gase acknowledged a few weeks ago that Mosley's injury was more significant than first thought, and the linebacker spent the past several weeks working his way back to practice. He declared last week that he was playing against New England unless he got hurt, but said after the game he was feeling effects of the injury a bit.

Gase wouldn't speculate as to what else might be ailing Mosley, who did not practice Wednesday.

"We've just got to get with the doctors," Gase said. "Once we get all the facts of what's going on with his body, sit down and figure out what's the best thing to do going forward — where are we at? What can we do for him? How can we help him?"

Rookie Blake Cashman is the team's only healthy inside linebacker. Neville Hewitt (neck) and Albert McClellan (concussion) both sat out against the Patriots. Hewitt was limited Wednesday, while McClellan remained sidelined.

"Anytime he's not in practice, it's not ideal," Gase said of Mosley. "Not only is he one of our better players, but a captain. We're thin right now. We're running out of bodies at linebacker."

Quarterback Sam Darnold sat out team drills after having a toenail removed Tuesday. Darnold injured the nail Monday night during the game.

"I don't know," Gase said, "it was pretty gross, what they were talking about."

The coach added that Darnold is using padded shoes to help him feel comfortable. The team was expected to evaluate during practice whether he could participate in team drills, but Gase said he should be fine to play Sunday at Jacksonville.

"He's limping a little bit," Gase said. "But once we get him in his shoe and the padding and all that stuff, he should be good to go."

It's the latest ailment Darnold is dealing with this season. He missed three games while recovering from mononucleosis before returning against Dallas and being selected the AFC offensive player of the week for his performance.

He followed that with the worst game of his career on Monday night, going 11 of 32 for 86 yards with four interceptions, a lost fumble and a horrific 3.6 quarterback rating. Darnold also made headlines when he said while wearing a microphone on the sideline during ESPN's broadcast that he was "seeing ghosts" as he struggled against the Patriots' defense. Gase said Tuesday the organization was angry that comment made it on the air.

Guard Kelechi Osemele remained out of practice with a shoulder injury as his standoff with the team over whether he needs immediate surgery continues. Osemele said Wednesday he will have surgery Friday, but the team had yet to approve it.