Jones has disappointing return in Giants loss to Cards 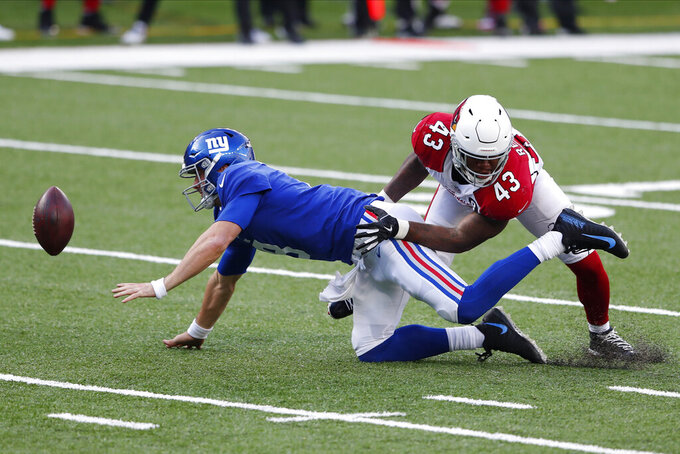 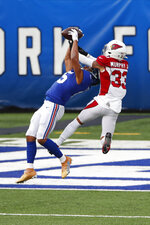 EAST RUTHERFORD, N.J. (AP) — Quarterback Daniel Jones didn't have either the return he wanted from a hamstring injury nor the one New York Giants needed.

Not only did Jones return, so did the old Giants, the team that started the season 0-5 under rookie coach Joe Judge.

It was ugly Sunday as the Giants (5-8) saw their four-game winning streak come to an end in a 26-7 loss to the Arizona Cardinals at MetLife Stadium.

Coming into the game, the big question was whether Jones would return after missing last weekend's 17-12 win over Seattle. Colt McCoy started that one and the Giants got a big effort from their defense and just enough offense.

Jones practiced fully for the first time on Friday and got the start after looking good in warmups. He rarely looked good once the game kicked off.

The offense did not get into Cardinals territory in the first half and Jones was sacked six times before leaving late in the fourth quarter. What was most obvious was he did not run, one of his best tools. He would not say whether he was told not to run or chose not to run.

The Cardinals quickly figured that out and limited the Giants inept offense to 159 yards, 3 of 12 on third-down conversion attempts and just over 22 minutes time of possession. The Giants were sacked eight times with linebacker Haason Reddick setting a franchise record with five. New York had three turnovers.

Giants coach Joe Judge had no regrets about starting Jones.

“I thought he was able to protect himself in the pocket, which was the main concern as in can he step up and can he move in it,” Judge said. “We knew there were going to be some situations today where he wasn’t going to pull it down and just run like he’s done in the past. We knew that he was going to either end up throwing the ball away or take sacks at certain point. We knew that going into the game and we saw that early on.”

Judge said he checked with Jones throughout the course of the game to make sure he was able to play. He also spoke with the coaches about inserting McCoy earlier in a bid to spark the offense.

Jones did not say much about his hamstring, which was hurt against Cincinnati on Nov. 29. He felt he would be able to play Sunday night at home against Cleveland.

The Giants were limited to 78 yards rushing, snapping a run of seven straight games in which they have gained at least 100 yards. They had a season-high 192 in the win over Seattle.

“We’re never overconfident,” said running back Wayne Gallman, who led the team with 57 yards on 12 carries. “We come in confident as a team and what we do in practice of course throughout the week. They just had some things we hadn’t seen. We just have to play better, that’s it.”