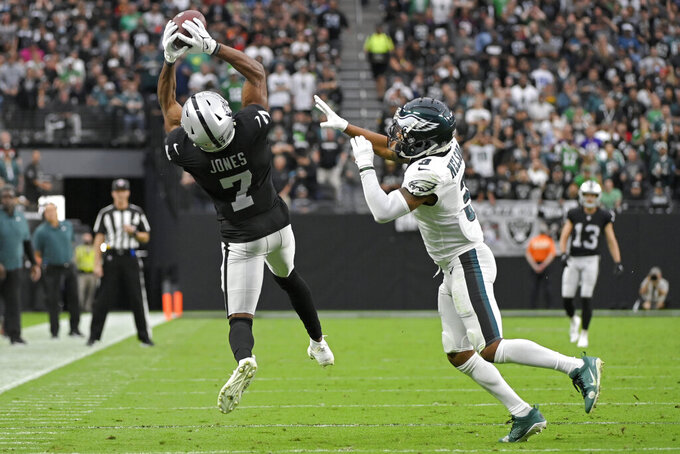 HENDERSON, Nev. (AP) — Las Vegas Raiders wide receiver Zay Jones has been targeted seven times this season and has six receptions to his credit, including one walk-off touchdown in a season-opening win over the Baltimore Ravens.

Don’t be surprised if Jones comes close to matching each one of those stats Sunday against the New York Giants.

Las Vegas is set to take the field for the first time since the fatal crash that has former Raiders receiver Henry Ruggs III facing felony charges. Jones will likely go from backup to starter.

“Zay Jones is the hardest practicing guy ever,” quarterback Derek Carr said. “Now, because he played so hard and because he practiced so hard and we all believed in him, what a great opportunity and exciting moment for him.”

Though hard-nosed, blue-collar receiver Hunter Renfrow leads the team with 38 receptions, and big-bodied Bryan Edwards makes him a deep threat in one-on-one situations, Jones becomes the X-factor because of his diversity.

“Now he has a very big role,” Carr said. “But roles change in the NFL quickly and his role has changed just along with some other guys whose roles are going to change.”

For Carr, the roles of all his targets this season have provided him with a diverse group that individually possesses specific skills that attack each defense.

Carr’s top target the past two seasons, tight end Darren Waller, returned to practice this week and is expected to be in the lineup Sunday to give the Raiders another big body off the line that can also run routes like a receiver. Edwards gives the team a longer and more physical frame to outman shorter defensive backs. And Renfrow’s hard-nosed approach makes him the go-to guy on third downs.

But with Jones, who is averaging 19.17 yards per reception, he realistically can answer the call in many of those roles. The 6-foot-2, 200-pound wideout has proven to have been a fearless ball hawk with a football IQ that is complemented by a competitive toughness that will frustrate any defender.

“I think the common theme of when I talk about Zay is how hard he works,” Carr said. “I think you guys have seen at training camp and just the relentlessness he practices with, and it’s literally every day. He’s the hardest-practicing person I’ve ever seen in my life. I am excited for him. When he’s made plays in the game, you guys hear how I talk about it after the game, I’m just so excited for him.”

Offensive coordinator Greg Olson, who calls the plays for Las Vegas, said this isn’t the way Jones wanted an opportunity to assume a starting role. The team has always felt strongly about what he brings.

“He’s had a very good week of practice, but he’s had good weeks of practice in the past,” Olson said. “So, if you were to talk to not only just Derek, but the rest of the players on offense at every position — O-line, tight ends, running backs, quarterbacks — they’ve got all the confidence in the world in Zay, and we do as well as a staff. We’re very thankful to have him and we’re eager to see what he can do.”

The fifth-year veteran receiver who started his career with Buffalo and has been with the Raiders since the middle of the 2019 season, can line up wide, in the slot, or as a flanker to exploit his speed.

Jones, whose career highs of 56 catches and 652 yards came with the Bills in 2018, has also proven his worth on special teams.

“Zay has made a lot of plays in the games that we’ve played in,” Las Vegas interim coach Rich Bisaccia said. “People don’t even notice what he’s done playing flyer out there on the punt team, and he’s on kickoff return.

“We have a high expectation for what Zay can bring us, just like what he’s brought us up to this point.”