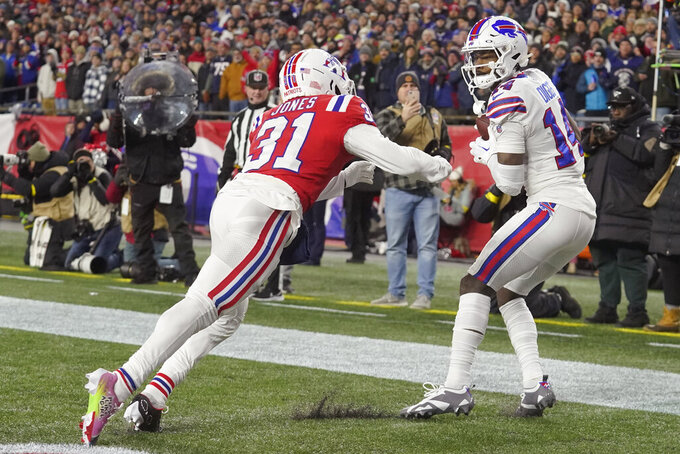 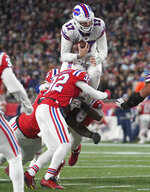 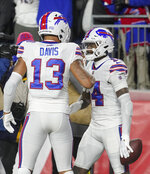 FOXBOROUGH, Mass. (AP) — The Buffalo Bills had done everything this season, except earn a victory in their division.

They're hoping their first will be the one that helps put them back on the path to winning it again.

Josh Allen threw two touchdown passes and the Bills beat the New England Patriots 24-10 on Thursday night for their first AFC East win of the season.

Devin Singletary had a 1-yard touchdown run to help the Bills (9-3) win their third straight and take a half-game lead in the division over Miami. Buffalo had been 0-2 against division foes.

“We know these games that are coming up, they matter,” Allen said. “The ones in December and January, they matter. We’ve got to find ways to go win some football games.”

Including the playoffs last season, the Bills have won their last three meetings with New England (6-6).

Allen went 22 of 33 for 223 yards, consistently buying time in the pocket and finding soft spots in the Patriots’ zone. The Bills have struggled at times in the red zone, but went 3 for 3 on Thursday.

Despite playing without top pass rusher Von Miller, who suffered a knee injury in a Thanksgiving win over Detroit, Buffalo’s defense held the Patriots to three points over the final three quarters.

“There’s a lot of things we need to do better,” Patriots coach Bill Belichick said.

A week after putting together his most complete effort of the season, New England’s Mac Jones was flustered and unsure for most of the night. He finished 22 of 36 for 195 yards and a touchdown. The Patriots were 3 of 12 on third down and 0 for 1 in the red zone.

“We want to win. And we’re not doing that," Patriots center David Andrews said. "We’ve got to find ways to win. Whatever that is.”

Bills linebacker Tremaine Edmunds said the plan was to make Mac Jones beat them with his arm.

“We just knew we had to make them one dimensional, whatever that was," said Edmunds, who had six tackles. "Our focus is ahead, not looking back.”

The Bills started slowly on offense, settling for a field goal on their first possession.

Trailing 7-3, Allen went to work during Buffalo's next two opportunities.

He led his team 82 yards in nine plays, ending the drive with an 8-yard touchdown pass to Stefon Diggs on the first play of the second quarter.

Following a Patriots punt, Allen capped a 14-play, 56-drive by eluding the Patriots’ pass rush and tiptoeing along the sideline before throwing across his body for an 8-yard TD pass to Gabe Davis.

The Patriots came in banged up on their offensive line and got creative to get their first points of the night.

After going three-and-out on their opening drive, New England inserted speedy cornerback and return man Marcus Jones for his first offensive snap of the season.

He made the most of it, catching a quick screen from Jones, finding a seam and sprinting through Buffalo’s secondary for a 48-yard touchdown.

That was about the only highlight for the Patriots.

They punted on three straight possessions, then failed to get anything out of Allen’s fumble after Nick Folk hit the crossbar on a 48-yard field goal attempt with 10 seconds left in the half.

Miller was placed on injured reserve Thursday and will miss at least four games. Starting left tackle Dion Dawkins (ankle) also sat and was replaced by David Quessenberry, who gave up a sack on Buffalo’s opening drive and appeared to aggravate his troublesome knee.

Just before halftime, Quessenberry was also responsible for letting Josh Uche get to Allen for a strip-sack that was recovered by Matt Judon.

Patriots center David Andrews returned after his one-game absence due to a thigh injury, but New England was missing starting running back Damien Harris (thigh) along with tackles Isaiah Wynn (foot) and Yodny Cajuste (calf/back).

Recent practice squad addition Conor McDermott stepped in to start at right tackle. Trent Brown started at left tackle but was dealing with an illness.

Bills: DT Jordan Phillips left with a shoulder issue. ... Quessenberry left late in the third quarter with an ankle injury. TE Dawson Knox walked to the sideline with a toe injury but later returned. ... CB Tre’Davious White left briefly in the second quarter with a stinger but was cleared to return.

Diggs finished with seven catches for 92 yards, and his second-quarter TD catch was his 10th receiving score of the season, tying the career high he set last season.

He is the first player in team history to record multiple seasons with 10-plus receiving TDs.

Buffalo went 23 straight drives over more than two games without punting against the Patriots before the streak ended with Sam Martin’s punt with 3:04 left in the second quarter.

Bills safety Damar Hamlin was ejected with 2:54 left in the game after being called for unnecessary roughness for his hit on defenseless Patriots receiver Jakobi Meyers in the end zone.

Patriots: At Arizona on Monday, Dec. 12.