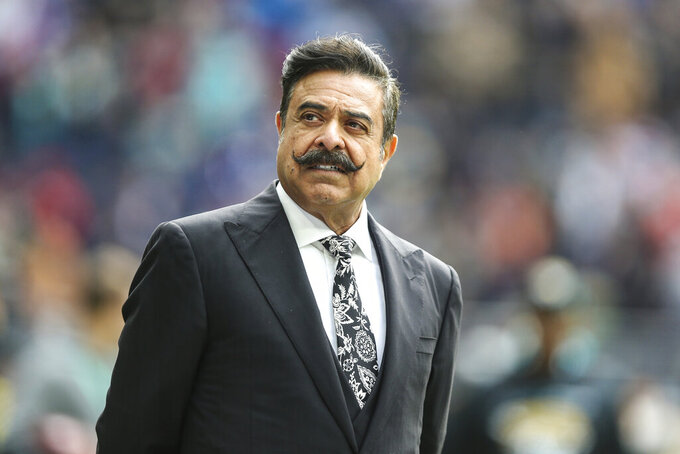 FILE - Jacksonville Jaguars owner Shad Khan on the field before an NFL football game against the Miami Dolphins at Tottenham Hotspur Stadium in London, Sunday, Oct. 17, 2021. Over the past 100 years, around 110 men and a handful of women have owned controlling portions of NFL teams. Of that select group, all but two have been white. . (AP Photo/Gary McCullough, File)

Khan made it clear Monday he values making informed decisions over “just acting helter-skelter on emotion.” He pointed out giving former coaches Gus Bradley and Doug Marrone four years apiece to see what they could build in Jacksonville.

Khan held a series of meetings the day after Jacksonville’s fifth consecutive loss, a 20-0 drubbing at Tennessee that showed just how far the Jaguars (2-11) have regressed on offense. Rookie quarterback Trevor Lawrence threw four interceptions in a game for the first time in his life, and Jacksonville finished with fewer than 200 yards for the second straight week.

It was the first time Jacksonville had been shut out in Khan’s decade of ownership.

Khan met with players, coaches and members of the team’s business department at TIAA Bank Field before hosting nearly 20 media members on his superyacht docked in downtown Jacksonville on the St. Johns River. The sessions were planned long before Jacksonville’s latest loss and part of the 10-year anniversary of Khan buying the NFL franchise.

It was impossible for Khan, however, to avoid addressing everything surrounding Meyer and the team this week and this season. NFL Network reported Saturday that the Jags are dealing with internal strife stemming from how Meyer treats his assistants. The report cited unnamed sources and detailed a heated argument between Meyer and receiver Marvin Jones that Meyer denied ever happening.

It was the latest issue for Meyer, whose first NFL season has been filled with embarrassments and head-scratching decisions.

“What concerns me is obviously wins and losses,” Khan said. “But, hey, we’re sitting here, we haven’t had a lot of wins. What’s different about this thing is you have losses and you have drama. In the past, it was like, you were, ‘It’s like the lowly Jaguars’ and everyone left you alone. Now, the scrutiny we have is really something different.

“So how much of that is we’re bringing it upon ourselves or how much of that is deserved? In this case, Urban, he won wherever he was. This is something he’s never dealt with. And when you win in football, you create enemies. The only way you can really deal with that is you got to win again. I wish there was a panacea.”

Khan called the season frustrating and expressed hope for the future because Lawrence “is even better than advertised.”

“I think he’s vital,” Khan said. “Look at how he’s handled the last week, and I think it’s exemplary. I have nothing but the utmost respect. And I’ve got to tell you one thing he told me the very first time I met him: ‘If you pick me, I’m going to retire as a Jaguar.’ I hate to say it, (but) nobody’s ever said that to me.”

Lawrence accepted blame for the team’s offensive issues at Tennessee and told Meyer that running back James Robinson needed to be on the field more after Robinson was benched in consecutive weeks following fumbles.

Khan said he expected more in Meyer’s first season. He called Lawrence a “generational talent,” mentioned having five of the first 65 picks in the NFL draft (only Lawrence and second-round pick Tyson Campbell are contributing) and signed a number of free agents.

Khan said a four-year build was “absolutely a trap I don’t believe falling in.”

“The plan is you need to start winning now and tell me what you need and that’s what we’re going to do,” he said. “I feel we have a roster that is far better than winning two games.”

But that’s what the Jaguars have through 13 games. It is, however, double their win total from last season.

“I’m not impulsive,” he said. “I learned that a long time ago with anything that’s this important you don’t want to be impulsive. You want to look at exactly what I know first-hand, what people are telling me and then collect that and do the right thing.”

By Dave Campbell 6 minutes ago
By Maryclaire Dale an hour ago
By John Wawrow 2 hrs ago
By W.g. Ramirez 6 hrs ago
By Noah Trister 13 hrs ago