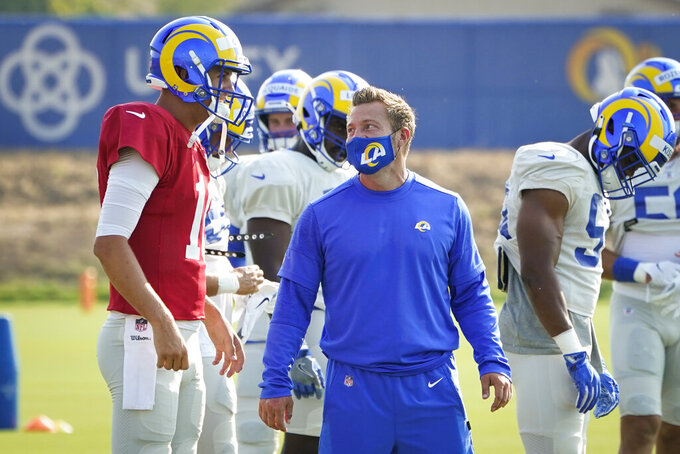 LOS ANGELES (AP) — The Los Angeles Rams are opening a lavish new stadium with no fans in it next month.

That might not even be the weirdest thing they'll experience in this utterly unique NFL season.

A year that was already unprecedented because of the coronavirus pandemic got even stranger when the Rams added the omnipresent cameras of HBO's “Hard Knocks” to their daily routines. That microscope has already led to some surreal moments, and others that might be better off forgotten, as coach Sean McVay learned from watching the first episode.

“I just wanted to make sure that I didn’t come off as a total tool with my shirt off at my house in the pool," McVay said of the scene in which he played ball in the water with his dog, Callie, at their house in the San Fernando Valley. "As soon as I did that with them, I said ‘I cannot believe I was that dumb to do that.’ If you can believe, it was actually worse before we cut a couple of those scenes out. So I came away scathed, but not as scarred as I would have been otherwise.”

The Rams will be clothed in brand-new uniforms this season at their $5 billion SoFi Stadium, owner Stan Kroenke's West Coast NFL hub designed to be a landmark edifice for California sports for decades to come.

The stadium is a beauty, even if fans won't see it “until further notice,” according to a statement put out by the team Tuesday.

In the shorter term, the Rams must figure out how to contend in the ultracompetitive NFC West despite losing several key veteran contributors and landing no high-profile replacements for them. Todd Gurley, Brandin Cooks, Dante Fowler, Cory Littleton, Eric Weddle, Clay Matthews and Nickell Robey-Coleman, and even longtime kicker Greg Zuerlein are all gone.

McVay has posted three straight winning seasons in his tenure, but this year appears to be his greatest challenge since his stunning transformation of the Rams from losers to contenders in 2017.

“It will be newer challenges, things that we’ve never navigated through, but I am very confident with the plan that we have in place,” McVay said.

More things to watch with the Rams:

McVay believes his offense will improve without “the monotony” of going against the same defense for another year. That's because McVay replaced longtime defensive guru Wade Phillips with rookie coordinator Brandon Staley, who has much less to work with on paper than his predecessor.

But the Rams still have a large portion of their core from their 2018-19 Super Bowl team, and those holdovers have the confidence of knowing how to win, even in a new scheme that was largely installed over Zoom.

“Coach Staley came from Denver, he came from Chicago,” said Rams safety John Johnson, whose season was cut short by injury last year. “I think we have better guys on defense than he had in both of those places. So just picture what they were doing, with better guys.”

The Rams released the two-time All-Pro and focal point of their offense for the past half-decade before his big new contract had even begun. That major financial miscalculation is partly why the Rams are choosing among longtime backup Malcolm Brown, second-year pro Darrell Henderson, and rookie Cam Akers for his replacement.

Although Gurley didn't reach his usual heights in 2019, he still left a gaping hole in McVay's offense. The Rams are confident they can succeed with some combination of those three replacements.

Jalen Ramsey has looked sharp in his first training camp with the Rams. Los Angeles' 2019 midseason acquisition appears content and inspired with his new team, and the new defense will count on his shutdown skills at cornerback.

As for his long-anticipated contract extension, the Rams often announce their biggest deals shortly before the regular season, as they did with Aaron Donald in 2018 and Jared Goff in 2019.

The Rams built a massive tent in the parking lot of their training complex to maintain social distancing and outdoor conditions, but temperatures have been high in Ventura County. Several players have recovered from the virus, including 38-year-old left tackle Andrew Whitworth, who begins his 15th NFL season with optimism about the Rams' direction.

“Come with passion and energy every single day, and you know what? We’ll be just fine,” Whitworth said.

CAN I KICK IT?

Zuerlein, holder Johnny Hekker and long snapper Jake McQuaide had been together since 2012, but Zuerlein and special teams coordinator John Fassel left for the Dallas Cowboys, who are coincidentally the Rams' first opponent at SoFi. Three kickers are contending for Zuerlein's job, with CFL veteran Lirim Hajrullahu kicking alongside youngsters Austin MacGinnis and Sam Sloman, a seventh-round draft pick.