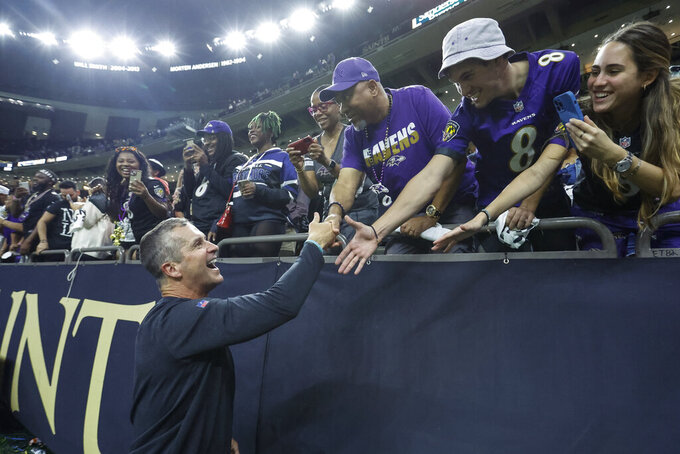 OWINGS MILLS, Md. (AP) — Each season brings a new challenge for Lamar Jackson, and through much of 2022, he has looked more steady than spectacular.

Since his late interception and fumble cost Baltimore dearly in a loss to the New York Giants, Jackson has gone three games without a turnover, and it's no coincidence that the Ravens have won them all. As sensational as Jackson can be — and nobody should take his remarkable stats for granted — with an offense limited by injuries at key positions, this year might be a test of his patience as much as anything.

“They joke with me that I’m beating a dead horse, but I’m going to keep beating it. We all know the correlation between turnovers and success, in terms of wins and losses,” quarterbacks coach James Urban said. “You don’t want to play scared. He hasn’t been — he’s still been aggressive — but you want to make great decisions.”

The Ravens (6-3) have their open date this weekend, and with a favorable-looking schedule the rest of the way, this looks like another chance for Jackson to try to lead Baltimore on a deep playoff run. Last season was completely derailed by injuries — including to Jackson himself down the stretch — and health has been an issue on offense this year as well.

In Week 2, Jackson threw for 318 yards and three touchdowns against Miami. That day, he became the first quarterback in NFL history with both a touchdown pass and a touchdown run of at least 75 yards in the same game.

Baltimore's offense hasn't really reached those heights since. Receiver Rashod Bateman was lost to a foot injury, and standout tight end Mark Andrews has dealt with knee and shoulder problems. J.K. Dobbins and Gus Edwards — two running backs who missed all of last season with knee injuries — returned but have been limited for various reasons.

Jackson certainly can carry an offense for periods of time. In addition to his passing, he has almost twice as many yards rushing as the next-highest Baltimore player. But with solid work from the offensive line and enough role players stepping up to run the ball and catch passes, the Ravens haven't needed Jackson to force the issue too much.

“Just moving the ball, moving the chains. That’s what we have to do sometimes,” Jackson said after Monday night's win at New Orleans, where he completed passes to 10 different teammates. "Sometimes things aren’t opening up down the field, (and) we have to take what the defense gives us. That’s what I had to do.”

Jackson has thrown 16 touchdown passes, equaling his total from all of last season. But the Ravens at the moment are more methodical than explosive, especially in the passing game.

Jackson is on track to rush for more than 1,000 yards. He is averaging 7.4 yards per carry, a career best. Baltimore is 13th in the league in total offense but third in time of possession and fifth in points per game. The Ravens have a plus-7 turnover margin, second in the NFL to Philadelphia's plus-15.

The last time Baltimore lost was on the road against the Giants. After a mishap on a shotgun snap, Jackson scrambled and threw a pass that was intercepted, giving the Giants the ball in the red zone. They scored the go-ahead touchdown, and then Jackson fumbled to seal Baltimore's fate.

Since then, the Ravens have turned the ball over only once in three games.

Jackson is one of the game's dynamic players, and he's always a threat to play like he did against Miami, when he looked like an MVP candidate. But with the injuries around him, if the Ravens are going to have success, it might look more like it did Monday against the Saints.

Jackson threw for 133 yards and a touchdown in that game. He ran for 82 yards. The Ravens went 9 for 15 on third down — when Jackson's ability to improvise can be particularly scary for a defense — and controlled the ball for 37:47.

“Third down, he kind of did put the cape on a number of times,” coach John Harbaugh said. “That’s why we had the third-down numbers that we did really, was he made plays both passing, and scrambling and even run-game stuff.”

It wasn't the type of game that belongs at the top of Jackson's highlight reel, but it was another win for his AFC North-leading team.

“We just have to keep doing what we’re doing, stay locked in, keep cleaning up the little details here and there,” Jackson said. "I feel like the sky’s the limit for us.”