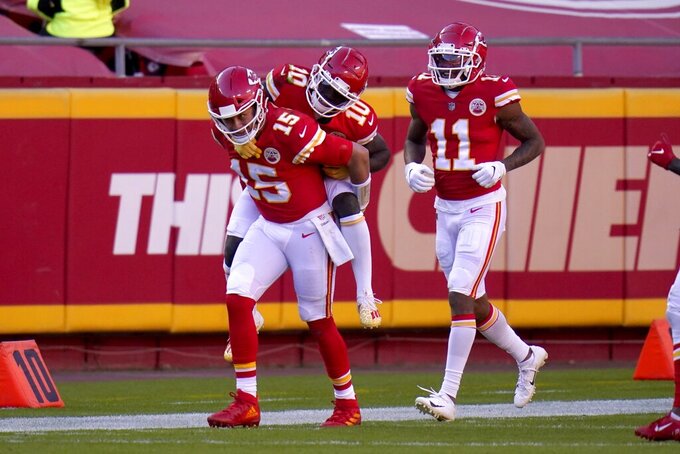 Kansas City Chiefs quarterback Patrick Mahomes (15) gives wide receiver Tyreek Hill (10) a ride on his back to the bench as wide receiver Demarcus Robinson (11) looks on following Hill's touchdown catch in the second half of an NFL football game against the New York Jets on Sunday, Nov. 1, 2020, in Kansas City, Mo. (AP Photo/Jeff Roberson)

KANSAS CITY, Mo. (AP) — Patrick Mahomes did just about everything for the Kansas City Chiefs on Sunday.

He even toted Tyreek Hill back to the sideline after a touchdown catch.

“I mean, it's always fun to go out and score touchdowns and do all that type of stuff,” Mahomes said, “but we've been saying it all year long, we have a lot of ways to beat teams. Today, they did a good job of stuffing up the run. We took it to the air and threw the ball and did it that way. It's about taking what's there and finding ways to win.”

Hill wound up with two of the touchdown catches. On the first, he celebrated by jumping into the stands and tossing the football to a fan, and Mahomes was there to help him back onto the field. On the second, Mahomes claimed to see Hill “a little banged up” and decided to carry him — horse-and-jockey style — back to the Kansas City sideline.

“Just having a little bit of fun,” Mahomes said with a wry smile.

Travis Kelce added 109 yards receiving and a touchdown, Mecole Hardman and Demarcus Robinson also scored, helping the Chiefs (7-1) give Andy Reid his 229th win to move into a tie with Curly Lambeau for the fifth most in NFL history.

Le'Veon Bell, getting a crack at the Jets just a few weeks after they released him, was held to just 7 yards rushing with three catches for another 31 yards — though it wasn't as if Kansas City needed him.

Darnold, who was without top receivers Jamison Crowder and Breshad Perriman because of injuries, was just 18 of 30 for 133 yards as the Jets fell to 0-8 for the first time since the 1996 team of Rich Kotite.

“It’s obviously not where we wanted to be,” said Jets coach Adam Gase, whose team went three-and-out on five of its first six second-half possessions and finished with 221 yards total offense. "I’m just like everybody else from the aspect of, I’m doing this job to win, not to go out there and get my face stomped in.”

The Chiefs were astounding 19-point favorites coming into the game, and the opening series made it clear that wouldn't be nearly enough. Mahomes was 5 of 5 for 85 yards, and he finished off the 90-yard drive with a 30-yard pass to Hardman.

While the Jets answered with the first of three first-half field goals, the Chiefs kept scoring touchdowns.

Mahomes threw a dart over the middle to Hill for a 36-yard touchdown on their next drive, then he flipped a nifty pass underneath the Jets coverage to Kelce for his third TD pass of the half and a 21-9 lead at the break.

Any hope the Jets could keep building some momentum with offensive coordinator Dowell Loggains calling plays for the second straight week evaporated in the second half. They went three-and-out on four of their first three series and, when they finally picked up a first down, they promptly fumbled the ball away on their next play.

It wasn't unlike last week, when New York managed 4 yards the entire second half against Buffalo.

There wasn't much lull in the Chiefs offense, though. They may have squandered a scoring chance when Bell was stopped on fourth-and-1 at the Jets 14, but they reached the end zone a few minutes later anyway. Mahomes hit Robinson from 26 yards out for his fourth TD pass, giving Kansas City a 28-9 lead late in the third quarter.

Mahomes capped his big day with his second touchdown throw to Hill early in the fourth. His five TD passes were second only to a pair of six-TD games he had against the Steelers and Rams — incidentally, the Jets have four touchdown passes all season — and his yardage total was the fourth most of his career.

“It's funny, we have this whole RPO thing going on and some of those runs ended up being throws," Reid said, “but we'll just count them as yards. I thought it was a nice job by Patrick and again, he had complete command of everything going on.”

The Chiefs got a couple big plays on special teams. The first came when Tommy Townsend threw a pass to Byron Pringle on a faked fourth-down punt to keep their second TD drive alive, and the second came when Armani Watts blocked a 47-yard field-goal attempt by Sergio Castillo to end the first half.

“The last pass I threw in a game was probably freshman year of high school,” Townsend said. “That was probably about it.”

Jets: Darnold took a big hit late in the game and appeared to be favoring his right shoulder, which he sprained against Denver on Oct. 1 and missed two games. Gase said the QB will be re-evaluated but “seems to be OK.” ... DL Quinnen Williams hurt his hamstring and didn’t finish the game. ... Crowder had been doubtful with a groin injury and Perriman remained in the concussion protocol this week.

Chiefs: play the Panthers next Sunday.

By Maryclaire Dale And Michelle R. Smith just now
By Ralph D. Russo 15 hrs ago
By The Associated Press 16 hrs ago
16 hrs ago
18 hrs ago