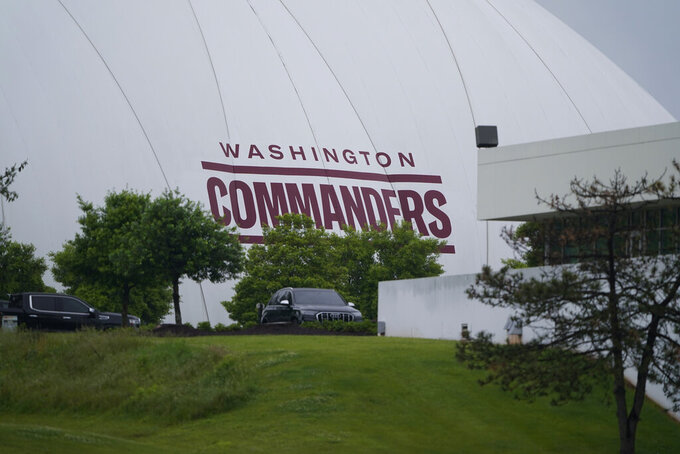 The Washington Commanders name is seen on their practice bubble at the team's NFL football training facility, Tuesday, May 24, 2022 in Ashburn, Va. (AP Photo/Alex Brandon)

ASHBURN, Va. (AP) — Terry McLaurin was a no-show for the Washington Commanders' first on-field workout of the offseason while negotiations on a contract extension are ongoing for the team's top receiver.

McLaurin and pass rushers Chase Young and Montez Sweat weren't on the field when voluntary organized team activities resumed Tuesday, along with receiver Cam Sims who was excused for the birth of a child.

Coach Ron Rivera said Young is still rehabbing his surgically repaired right knee and could be around soon, and he expects Sweat back as soon as Wednesday, but McLaurin's absence could last much longer.

Rivera confirmed talks are actively happening with McLaurin's camp about a new contract for the 2019 third-round pick who has led the team in catches and yards receiving each of the past three seasons.

“We’ve had communications with them, we’ve been working with them and it’s just a matter of time,” he said.

McLaurin, who turns 27 in September, has 222 catches for 3,090 yards and 16 touchdowns since making his NFL debut. It’s difficult, if not impossible, to see Washington letting him hit free agency after next season.

“Terry’s a guy that you want to build a team around,” said Allen, who skipped a week of voluntary workouts a year ago in the same situation before agreeing to a new deal on the eve of training camp. "He represents everything we want to build here, so I’m confident we’ll get something done.”

McLaurin is the team's best offensive player, and his presence will be crucial for new quarterback Carson Wentz, who practiced in a Commanders uniform for the first time Tuesday. Wentz was intercepted by reserve cornerback Corn Elder during one drill but largely impressed Rivera and the coaching staff with a solid first impression.

“I thought he did some really good things, got some pretty good rapport with his guys,” Rivera said. “The thing I like is it’s about making good decisions. You’re seeing a lot of good decisions out there right now.”

Young's decision to skip voluntary workouts a year ago raised questions, especially after the reigning Defensive Rookie of the Year got off to a rough start to the 2022 season. He had just 1½ sacks in nine games before tearing the ACL in his right knee.

As recently as late March, Rivera said Young told him he was going to attend these workouts. He's now expected to be around next week or not long after.

“Chase, for the most part, is working (on) his rehab,” Rivera said. “He’s met with the doctors, they’ve formulated a plan (and) he’s completing that right now. We will have him here eventually.”

Allen isn't worried about when Young shows up as much as the 2020 No. 2 pick is making sure all is right with his injured knee.

But the Commanders do need Young and Sweat to be on top of their game when the season starts in September.

“There’s things that Sweat and Chase have to take care of, and as teammates we understand that and we appreciate their communication with us,” Allen said. "We’re excited for the guys who are here. When they get back, it’s going to be even better.”