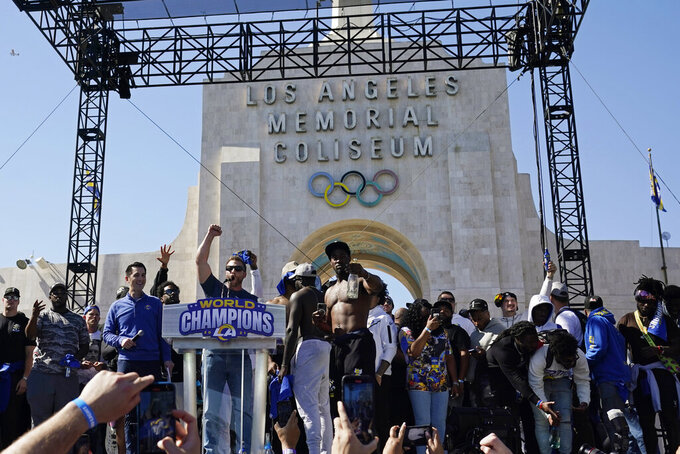 “I finished this season probably as refreshed and as rejuvenated as I’ve ever been,” McVay said Wednesday. “I think a large part of that is being around coaches and players that give you that energy and that excitement. I'm really excited about coaching.”

Putting the discussion of his imminent departure from the Rams firmly to rest, the 36-year-old McVay also confirmed he's eager to chase another trophy in the fall after entertaining and rebuffing interest from television broadcasters.

The youngest coach to win a Super Bowl has a new perspective on life and coaching for several reasons — and some are much more important than others.

McVay and Veronika Khomyn, his Ukrainian fiancée, have spent the past week concerned about her family amid the Russian invasion. The conflict began while the couple was on vacation in Cabo San Lucas celebrating the Rams’ Super Bowl triumph, and while Khomyn's family is currently safe, the conflict is massively worrying to McVay.

“Just watching the grace with which she’s handled this, how strong her family’s been in the midst of this, I’m just so proud to be associated with that culture,” McVay said. “President (Volodymyr) Zelenskyy’s leadership has been incredible.”

McVay said Khomyn's family stays up until the wee hours in Ukraine to watch the Rams, and he is ever grateful for their support.

“They want to talk about us winning the Super Bowl, and they’re in the midst of all these things going on," McVay said.

It certainly puts a needed perspective on McVay's more mundane concerns, such as needing to replace six assistant coaches from his championship staff before the front office makes key decisions on several potential free agent players.

McVay and general manager Les Snead both spoke to the media Wednesday for the first time since their championship victory at SoFi Stadium. They aren't attending the draft combine in Indianapolis this week — an unusual strategy, but not altogether surprising for a team that's likely to make its first pick next month with a third-round compensatory selection.

Snead confirmed the Rams are working on new deals for three-time NFL Defensive Player of the Year Aaron Donald, whose current contract goes through 2024, and for quarterback Matthew Stafford, who has one year left on his contract from Detroit.

Snead expressed confidence the Rams can get both deals done soon, and he remains confident Donald will decide to continue his career after being notably silent to questions about an early retirement during Super Bowl week.

With several important players heading toward free agency in two weeks, Snead confirmed the Rams will be active in attempting to retain as many key members of their title team as possible. Los Angeles is interested in re-signing receiver Odell Beckham Jr., but Snead acknowledged Beckham's knee injury from the Super Bowl could sideline him well into the regular season.

McVay also confirmed the departures, additions and reassignments from his staff Wednesday, most importantly rehiring Liam Coen to replace Vikings head coach Kevin O'Connell as the Rams' offensive coordinator. Coen was on McVay's staff from 2018-20 as an assistant receivers and assistant quarterbacks coach before leaving for one successful season as Kentucky's offensive coordinator.

Running backs coach Thomas Brown is moving to tight ends coach next season to give him a more thorough overview of the offense on his way to bigger responsibilities, McVay said. Brown replaces Wes Phillips, who will be O'Connell's offensive coordinator in Minnesota, and Brown is leading the search for his own replacement at running backs coach.