Metcalf back with Seahawks after testing 100-meter dash 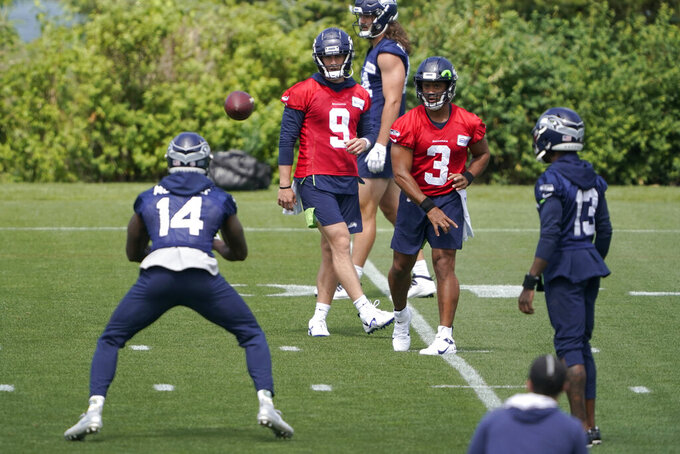 DK Metcalf is back at his day job as a wide receiver for the Seattle Seahawks after running the 100-meter dash at the USA Track and Field’s Golden Games last month.

Metcalf, at 6-foot-4, 235 pounds, had a respectable showing with a 10.37-second effort, but finished last in his heat and didn’t advance in the competition that served as a qualifier for the U.S. Olympic Trials.

“It was a very great experience just to be out there with those kinds of athletes and test my speed against them,” Metcalf said Tuesday.

Metcalf said taking part wasn’t on his radar until USA Track and Field put out a tweet following his chase-down tackle of Arizona's Budda Baker on an interception last October.

“Once they sent the tweet out, I thought it was an open invitation for me to take it and I went with it,” Metcalf said.

Metcalf and many veteran players of the Seahawks — including quarterback Russell Wilson — reported to workouts during organized team activities this week after skipping the first several voluntary workouts of the offseason.

While Metcalf said he enjoyed his chance to tackle a different challenge, he’s going to remain focused on his football career for the time being.

“Those are some fast human beings,” he said. “They are very fast and very good at what they do and, you know, I’m going to stick to football for right now.”

Metcalf, Wilson and the rest of the Seahawks' offense is working to learn a new scheme as Shane Waldron takes over the unit as offensive coordinator. Waldron was hired this offseason to replace Brian Schottenheimer, who was relieved after three seasons in Seattle.

“It’s a new offense, so there’s a lot of different new things to learn,” Metcalf said. “That’s one reason why we’re here in OTAs is just to get our feet wet in the offense, try to take care of as many mistakes as we can early, so during training camp it’s going to be smooth sailing.

“It’s a lot of different kinds of routes that people haven’t seen from either team that he’s coached. So I’m just excited to get to work with him and get to hone in on those other skills.”

Metcalf will have one more side project this offseason before training camp begins in late July. He’s set to take part in the celebrity softball game at the MLB All-Star Game in Denver next month.