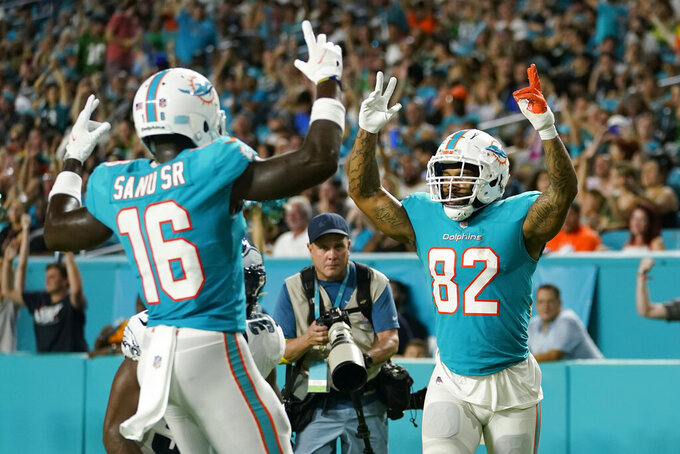 Miami Dolphins tight end Cethan Carter (82) is congratulated by wide receiver Mohamed Sanu (16) after scoring a touchdown during the second half of a NFL preseason football game against the Philadelphia Eagles, Saturday, Aug. 27, 2022, in Miami Gardens, Fla. (AP Photo/Lynne Sladky) 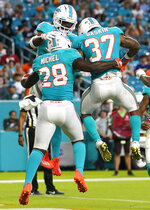 Miami has until 4 p.m. Tuesday to cut its roster to 53 players.

Also Monday, the Dolphins signed edge rusher Trey Flowers, who spent the past three seasons with the Detroit Lions.

Michel signed with the team in May after winning the Super Bowl with the Los Angeles Rams last year, but he came to a Dolphins team with a deep backfield. Miami signed Chase Edmonds and Raheem Mostert during the offseason and still has Myles Gaskin and Salvon Ahmed on the roster.

The Dolphins signed Sanu ahead of training camp, but he joined a deep receiver room that added Tyreek Hill and Cedrick Wilson Jr. in the offseason.

“You’ve seen multiple playmakers, really from top to bottom, in both groups,” Dolphins coach Mike McDaniel said of the difficulty of making roster cuts, specifically at receiver and running back. “That’s what’s super rare is you have at your final 53 decision time, every player in the position group has been on the field making plays. So that does not make it easy.”

Linebacker Calvin Munson was placed on injured reserve, and the team waived/injured linebacker Darius Hodge and defensive back D'Angelo Ross.