NBC's Melissa Stark back on sideline, 1st time in 20 years 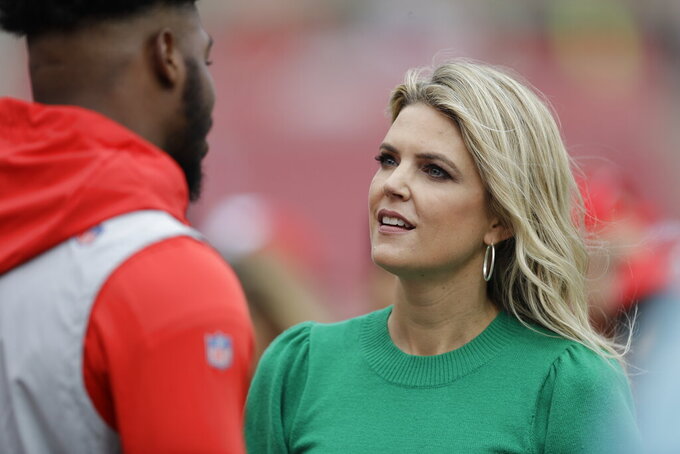 FILE - Fox Sports reporter Melissa Stark is shown before an NFL football game between the Tampa Bay Buccaneers and the Houston Texans, Saturday, Dec. 21, 2019, in Tampa, Fla. Twenty years after leaving the "Monday Night Football" to start a family, Melissa Stark is back as a sideline reporter. Stark will be on the sidelines for NBC's "Sunday Night Football" package and Thursday night's regular-season opener between the defending Super Bowl champion Los Angeles Rams and Buffalo Bills. (AP Photo/Chris O'Meara, File)

The last time Melissa Stark was regularly on the sidelines, Tom Brady was a one-time Super Bowl champion, and Matthew Stafford was a freshman in high school.

As Stark returns to sideline duty for the first time since 2002 after starting a family, Brady is still in the league and has added six more rings to his Super Bowl collection. Stafford is part of the defending Super Bowl champion Los Angeles Rams.

Stark will be reporting on both quarterbacks this week for NBC. The Rams begin defense of their title in Thursday night’s kickoff game against the Buffalo Bills, while Brady and the Tampa Bay Buccaneers visit the Dallas Cowboys on Sunday night.

“Never in my wildest dreams did I imagine my life would come full circle this way,” said Stark, who replaced Michele Tafoya after she decided to leave sports broadcasting. “Being part of hosting a live show in a studio is one thing, but being part of the action and being on the sidelines in the middle of the game is totally different. And that’s what I love.”

Stark was the sideline reporter on ABC’s “Monday Night Football” from 2000-02. She spent four years with NBC News (2003-07), including stints as a national correspondent for the “Today” show and an MSNBC anchor, along with covering three Olympics for NBC Sports.

Stark left the business for a few years when her family grew to four children, including twins, before joining NFL Network in 2011. She hosted Sunday morning coverage during the season, was a reporter, contributed to NFL draft coverage and did some sideline reporting when the network produced games in London.

Stark started on “Monday Night Football” when she was 25 and returns to primetime football at age 48 with four teenagers.

“I’ve always said to my husband, ‘I’m going to be replaced by someone younger.’ And he’s always said, ‘Stop thinking that. No, you’re not.’ To be able to come back with a family is very validating and an important message for women,” Stark said. “I think it affords a lot of opportunities to women and shows they can find a way to navigate to have that family but also have a career.

“I feel so honored that (NBC NFL executive producer) Fred (Gaudelli) thought of me. I feel privileged to be able to come back and do that.”

When it comes to how sideline reporting has evolved over the past 20 years, Stark cited additional resources, including having someone in the truck to directly relay information to the producer.

“The access to the storylines and research has also increased tremendously. Ultimately, the job of the sideline reporter is to be the eyes and ears on the field. So we can have a story here or there,” she said.

Stark isn’t the only staff shuffle on “Sunday Night Football,” which has been the top-ranked primetime show for the last 11 years. Mike Tirico becomes the primary play-by-play announcer after Al Michaels moved to Amazon’s “Thursday Night Football” package. Rob Hyland takes over as coordinating producer after Gaudelli moved into an executive role at NBC as well as producing the Amazon games.

Cris Collinsworth returns for his 14th season as an analyst. The crew worked last month’s Hall of Fame Game in Canton, Ohio.

“If I learned anything in Canton, it’s that my instincts are to be trusted. We’re going to be fine. Everybody communicates. Everybody connects, gets along. Similar-minded folks,” Tirico said. “We haven’t done a regular-season game together, but I know what (director) Drew Esocoff thinks and does, certainly Rob. Cris, I don’t have to look over and see, ‘hmm, what is he thinking?’ I’ve listened to Cris. I’ve worked with Cris. I have a sense of exactly where he’s going and what he wants to say, and the same is true with Melissa.”