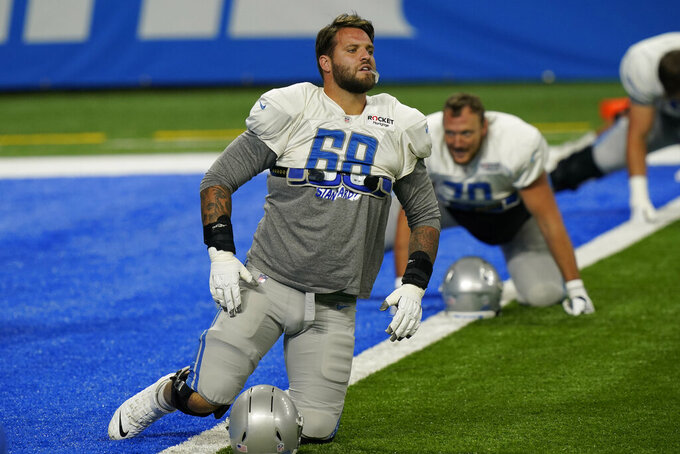 DETROIT (AP) — Taylor Decker has his big new contract with the Detroit Lions. His goals extend well beyond that, though.

“I feel like I've got a lot of good football ahead of me," Decker said Wednesday. "One thing that I told my parents last night was, obviously this is a huge, huge milestone in my life, my family's lives, my future kids' lives. This is huge, but the work isn't finished. That doesn't mean that the job's done.”

The Lions announced Decker's deal Wednesday. The previous day, agent Jonathan Feinsod confirmed that Decker had agreed to a six-year, $85 million deal including $37.5 million guaranteed. In four seasons on Detroit's offensive line, Decker has appeared in 55 games and made a strong contribution after the Lions drafted him in the first round in 2016 out of Ohio State.

That was the first draft pick Detroit made after Bob Quinn took over as general manager.

“Since the day we drafted him, Taylor has dedicated himself to our program and has developed into an important piece of our offense,” Quinn said in a statement.

“As one of our team captains, he sets a great example for every player in our locker room. This extension is a reflection of all of Taylor’s hard work, and we are incredibly excited to come to this agreement and continue to work with Taylor for years to come.”

Decker was the first Detroit rookie offensive tackle to start all 16 games since 2001. In 2017, his second year, he missed the start of the season following shoulder surgery and played only eight games. He hasn't had any extended absences since then and has been a steady presence amid occasional upheaval around him.

The Lions changed coaches before the 2018 season and had a new offensive coordinator last year. Coach Matt Patricia says Decker has kept improving amidst all of that.

“I’ve just seen so much growth in him over the last couple years in his ability to get better at the position, just be more consistent, his technique, his leadership is outstanding, the way that he approaches every single day. He’s just been a really consistent guy for us on the offensive line," Patricia said.

"I would say his overall football knowledge has just really increased with the different types of looks and protections, blitz packages that they see on the offensive line, the run game, just overall improvement by him each year.”

So the potential is there for this group to play together for a while.

“If you can have some continuity year to year and develop some chemistry and some cohesiveness with the guys that are playing next to you, that's huge," Decker said. "It's just a level of being comfortable around one another.”

When he agreed to terms on this contract, Decker quickly contacted his parents, so they would hear the news from him. It was an understandably emotional conversation.

“My mom started immediately bawling, crying. I started crying, and I had to be in a team meeting in four minutes. So it was quick, emotional, and then I called my mom and dad again today,” Decker said. "I'm the youngest of five, and I'm sure for my siblings and my parents to see their baby boy and their baby brother accomplish something like that, I hope it was cool for them."