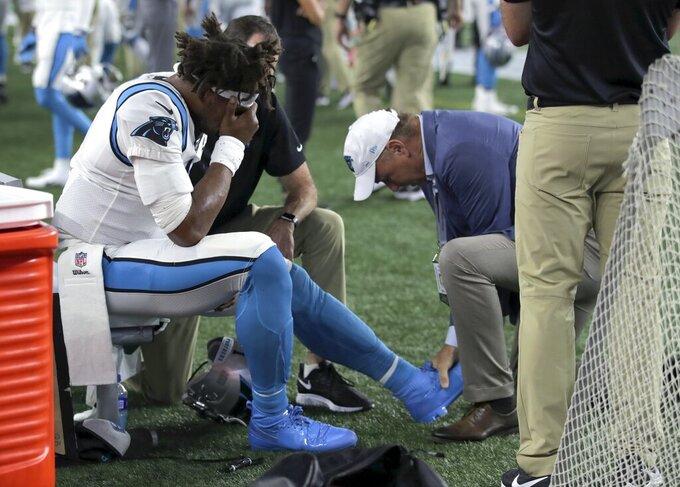 The Carolina Panthers quarterback left Thursday night's 10-3 exhibition loss to the New England Patriots in the first quarter with a foot injury that left him grimacing on the sideline.

Newton appeared to be injured when he was sacked for a loss of 8 yards by Adam Butler on a third-and-10 from the Carolina 31. It was one of two times Newton was sacked.

Newton was initially evaluated on the sideline and quickly accompanied to the locker room and did not return.

He didn't speak with reporters after the game but could be seen staring at the ground and wore a boot as he walked from the locker room toward the team bus.

"He got sacked, that's about all I saw," Carolina coach Ron Rivera said.

Asked if Newton's injury affects his opinion on the number of exhibition of games, Rivera said it's in the hands of the league.

"It's tough. It's part of the game, unfortunately," Rivera said.

Kyle Allen took over at quarterback.

The Panthers were pedestrian on offense and went three-and-out in each of their first two series of the night. Newton went 4-for-6 for 30 yards.

Tom Brady finished his first exhibition game of 2019 by going 8-for-12 for 75 yards, including an 18-yard pass to tight end Ryan Izzo to set up a 1-yard touchdown plunge by James Develin. It was the starting offense's final series.

Brady did it with a skeleton crew at receiver. Julian Edelman, Josh Gordon, N'Keal Harry and Demaryius Thomas all sat out. But undrafted rookie Jakobi Meyers continued to help open the field, catching seven passes for 74 yards. Phillip Dorsett also had seven catches for 47 yards.

Brady, who wore a fedora after the game, like the hats Newton often wears, said it was tough to see him get hurt.

"It's always hard to see them," Brady said. "We've had our fair share of watching and being part of these games. Guys you think are gonna play a big role over the course of the year and then in one play it doesn't happen that way. ... Injuries are part of the game."

Panthers: OT Greg Little was evaluated for a concussion in the fourth quarter.

Patriots: Special teamer Brandon King was carted off the field with about a minute to go in the first half after helping block on a punt return. ... RB Damien Harris left in the second quarter with an undisclosed injury.

Christian McCaffrey, Greg Olsen and Luke Kuechly all made their preseason debuts for the Panthers after not playing in the first two games.

McCaffrey had the best night, rushing three times for 16 yards and hauling in a 10-yard reception. Olsen had one catch for four yards and Kuechly made a tackle.

Safety Eric Reid said there was no malice in slapping the Patriots' Ben Watson across the neck as the tight end lay on his back after making a sideline catch. Reid was called for unnecessary roughness on the play. Watson stayed down briefly but walked off under his own power.

"I was just trying to stop him from getting the first down," Reid said. "I looked at the replay and, yeah, he was down. We'll see what the league do with it. I'm sure I'll end up getting a fine."

Watson criticized Reid on Twitter recently after Watson took issue with some of the positions of the Players Coalition.

Patriots safety Patrick Chung was not in uniform after being indicted in New Hampshire on a charge of cocaine possession.

Patriots: Host the New York Giants next Thursday in their final exhibition game.