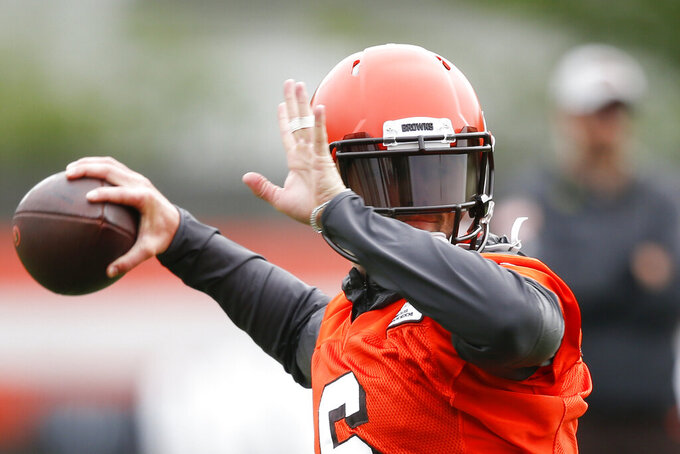 FILE - In this May 22, 2019, file photo, Cleveland Browns' Baker Mayfield throws a pass during an NFL football practice at the team's training facility in Berea, Ohio. It all starts with Mayfield, the former No. 1 overall pick who began last season as Tyrod Taylor’s backup and finished it breaking Peyton Manning’s league rookie record for touchdown passes despite playing in only 14 games. (AP Photo/Ron Schwane, File) 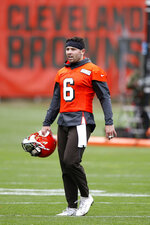 CLEVELAND (AP) — Those rabid, barking Browns fans have suffered in sadness longer than any group in the NFL, bar none.

They've never watched their team play in the Super Bowl, haven't experienced the playoffs since 2002 or bundled up and attended a postseason home game in 25 winters. There's a faction of the orange-and-brown backers who remain bitter about late owner Art Modell moving the franchise to Baltimore. The expansion era has been beyond torturous: two decades of disgrace, despair and dysfunction.

Like this proud city, which has taken its share of lumps over the years, Cleveland's beloved team has been a national punchline.

Well, the joke might be on someone else this time.

An array of potent offensive weapons surrounding fiery second-year quarterback Baker Mayfield is joined by an imposing defensive front four led by super freak end Myles Garrett. The Browns, who went 0-16 just two years ago and have symbolized professional incompetence — 29 starting QBs, 11 coaches in 20 years — are expected by many not only to contend this season but perhaps compete for their first league title in 55 years.

"I'm excited for the direction we're moving in," said star wide receiver Odell Beckham Jr., whose arrival in March via a stunning trade with New York Giants has lifted the collective psyche of this football-frenzied region. "I can see it. I can feel it from the fans. I can feel it from this team."

Once ignored, the Browns have become the league's trendiest team, this season's favorite flavor.

And it all starts with Mayfield, the 2018 No. 1 overall pick who began last season as Tyrod Taylor's backup and finished it breaking Peyton Manning's league rookie record for touchdown passes.

Equal parts brash and boyish, Mayfield officially took over in Week 4 and went 6-7 as a starter while completing 64 percent of his passes, exuding the swagger that has driven him since his youth.

The 24-year-old has restored hope into the most cynical of Browns fans, who waited patiently for the team to find its long-term answer at the game's most critical position.

"I think that I was born to play here," he said.

Beckham feels reborn with the Browns, who landed the three-time Pro Bowler famous for spectacular one-handed catches and silly off-field drama. Reunited with his close friend and former LSU teammate Jarvis Landry, Beckham, who has been slowed by injuries the past two seasons, claims he has put New York's skyline in his rearview mirror.

In Cleveland. Where football is finally back.

A year ago, Freddie Kitchens was in the background, teaching Browns running backs before an eight-game stint as offensive coordinator changed his life.

He was hired in January as Cleveland's new coach, the club's sixth in 10 years. Kitchens had a significant role in Mayfield's first-year success, and he's already under pressure to win. But the affable 44-year-old, barrel-chested Alabamian, who has bounced around the coaching circle, isn't concerned about the huge expectations heaped on his team.

"I am going to coach them like I coached them at Glenville State College," he said. "I truly believe it is just hype. That is all it is."

Beckham and Landry often talked in college about playing together in the pros. Well, the dream became reality and the duo gives the Browns maybe the most lethal 1-2 receiving punch in the league.

Beckham has been slowed during the exhibition season by an unspecified hip injury, but the Browns are confident he'll be ready for the opener against Tennessee.

"Odell is Odell," said safety Damarious Randall. "He's a once-in-a-generation type of talent. He will be ready to go Sept. 8."

Warning to quarterbacks and offensive linemen: Myles Garrett may be hazardous to your health. The 6-foot-5, 280-pounder is leaner — and maybe a little meaner — entering his third season.

He had 13 ½ sacks in 2018, but that was before general manager John Dorsey added former Pro Bowlers Olivier Vernon and Sheldon Richardson up front.

Kareem Hunt will spend two months watching, and then watch out. The 2017 league rushing leader is getting a new start with the Browns, who signed him as a free agent after he was released by Kansas City following an ugly incident in which he shoved and kicked a woman.

The league suspended him eight games, and as long as he stays out of trouble, he'll be available in November and, if not rusty, can provide a fresh option to Nick Chubb, who gained 996 yards as a rookie.

The Browns are 1-17-1 in openers since '99, with the lone win coming in 2004. The first few games take on extra importance for Kitchens, whose every in-game decision will be highly scrutinized.