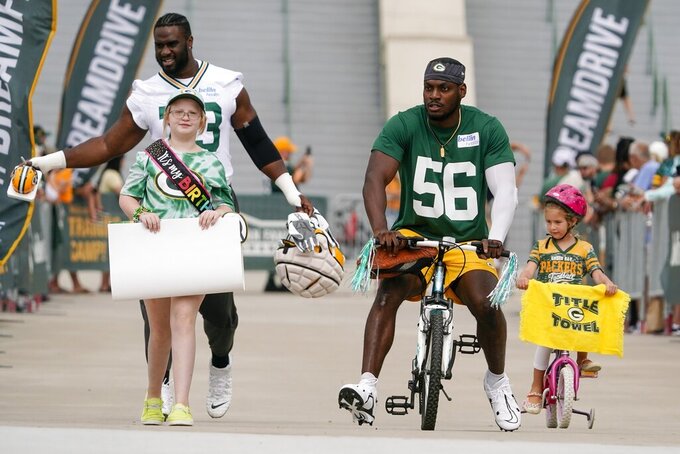 Bakhtiari has played just one game since tearing his left anterior cruciate ligament on Dec. 31, 2020. The left tackle underwent a third procedure on the knee during the offseason and was on the physically unable to perform list Wednesday as the Packers opened training camp.

“It’s a nightmare, my nightmare that I have to live,” Bakhtiari said. “I don’t know how many days it’s been, but I’m just excited to wake up (from the nightmare) one day.”

The Packers remain hopeful that Bakhtiari will be ready for the start of the season.

Bakhtiari, who turns 31 on Sept. 30, was playing well enough to earn first-team All-Pro honors for a second time when he hurt the knee. He underwent surgery after the 2020 season and had a second procedure during the 2021 regular season.

He returned to play 27 snaps in the 2021 regular-season finale at Detroit, but had a setback and was inactive for the Packers’ 13-10 NFC divisional playoff loss to the San Francisco 49ers.

“Everyone loves timelines,” Bakhtiari said. “When I’m ready, I’ll be out there. What I can say is I do feel really good. I really like — I feel normal. My knee feels normal and that’s the biggest plus. Now it’s just getting that normal feeling again when I play football, so that’s what it is, the load, stress, strength, but we’re not really in an ACL issue. That’s actually been a long time ago that we put that chapter to bed.”

The Packers need a healthy Bakhtiari as they attempt to reach a Super Bowl for the first time since their 2010 championship season. Bakhtiari earned first-team All-Pro honors in 2018 and 2020 and was a second-team selection in 2016, 2017 and 2019.

With Bakhtiari unavailable for either of Green Bay's past two playoff losses, the Packers allowed five sacks in each of those games.

Bahkhtiari acknowledged that he wasn’t at 100% for the Lions game last season, but hoped playing in the regular-season finale would prepare him for the playoffs. It didn’t work out that way.

“Obviously it didn’t respond in the right direction, which was a huge bummer for me,” Bakhtiari said.

The return of Bakhtiari and 2020 Pro Bowl left guard Elgton Jenkins from a torn ACL would boost an offensive line that has lost much of its depth with former right tackle Billy Turner now in Denver and former guard Lucas Patrick now in Chicago. The Packers did address the position in the draft by selecting UCLA’s Sean Rhyan in the third round, Wake Forest’s Zach Tom in the fourth and Penn State’s Rasheed Walker in the seventh.

Green Bay’s chances of winning a fourth straight NFC North title improve tremendously if Bakhtiari’s around to protect four-time MVP quarterback Aaron Rodgers’ blind side. Rodgers knows how difficult the recovery process has been for his teammate and friend.

“He was dealing with a significant injury that was more than just an ACL injury,” Rodgers said. “I’m not going to speak out of turn for him, but every day I was in there in the offseason, he was in there working, getting body work, doing rehab, so he wants to get back out there.

“I know it’s really, really tough on him but he’s got some great balance off the field, an incredibly amazing, beautiful wife who’s pregnant now. So I think this year’s going to be really special for him both on and off the field, and we look forward to him getting back whenever that time is.”

Indeed, Bakhtiari has reached this crisis point in his career at a time when things are going great for him off the field.

He got married during the offseason, with Rodgers officiating the wedding. As Rodgers noted, Bakhtiari and his wife are now expecting a baby.

“It’s like I’ve just been living a nightmare (with the injury), but outside of work, things have been the exact opposite,” Bakhtiari said. “It’s been like a fairytale for me. It’s just making sure the nightmare stays at work.”

NOTES: K Mason Crosby says he underwent a “minor scope on the knee” two weeks ago. He hopes to be ready for the start of the season. ... The list of Packers not practicing Wednesday also included WRs Sammy Watkins and Christian Watson. Gutekunst said he doesn’t expect Watkins to be out for very long. Gutekunst wouldn’t say whether Watson might return in time for the first preseason game. ... Gutekunst said he isn’t currently interested in adding any more receivers. One of the top potential options took himself off the market this week when Julio Jones signed with Tampa Bay. “I really like the group we have,” Gutekunst said. “I want to give those guys the opportunity to see what they can do, and if we feel we need to do anything, we’ll adjust. But right now it’s like any year at this time of year. There’s not a lot out there. They’re usually on teams.” ... The Packers released LB Caliph Brice.