Packers experimenting on O-line with Bakhtiari, Jenkins out 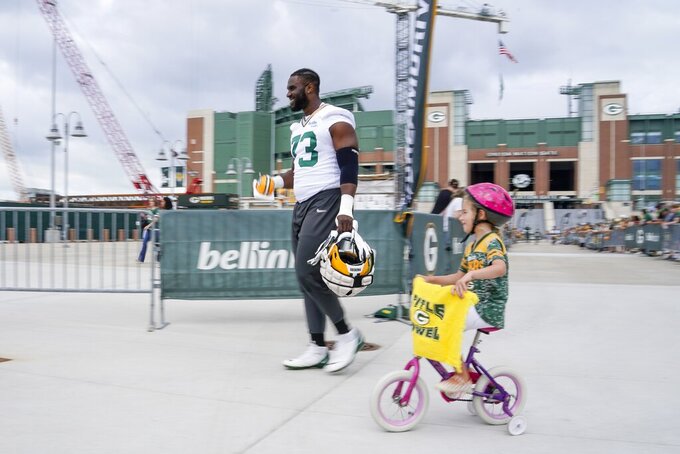 That shuffling could continue right up to the start of the season.

That has forced the Packers to capitalize on the versatility of their remaining linemen by putting them in various spots. Packers coach Matt LaFleur acknowledges it has been a learning process.

“There’s definitely some mental mistakes, there’s technique errors, just some lack of communication amongst the front,” LaFleur said. They are going against a pretty salty (defensive line) group, so I think it’s for the betterment of our offensive line. But, certainly, we’re nowhere near where we want to be or need to be.”

The struggles are understandable for a line missing its two top players.

Bakhtiari earned All-Pro honors in 2018 and 2020 and was a second-team selection in 2016, 2017 and 2019. The left tackle’s only appearance during the 2021 season was in the regular-season finale, where he suffered a setback that prevented him from playing in the Packers’ divisional playoff loss to the San Francisco 49ers.

Jenkins, a 2020 Pro Bowl left guard, filled in for Bakhtiari at left tackle before suffering his own injury. Jenkins says he still hasn’t given up on the possibility of playing in the season opener, though the usual recovery time for these types of injuries makes that seem unlikely.

“Right now, we’re actually in the ramp-up process, trying to see what all the knee can take and how it responds to different things,” Jenkins said.

The Packers already were dealing with the losses of right tackle Billy Turner (Denver) and guard Lucas Patrick (Chicago).

That makes the offensive line one of the Packers greatest concerns heading into their Sept. 11 season opener at Minnesota. The Vikings pass rush features former Packer Za’Darius Smith, who had a combined 26 sacks for Green Bay from 2019-20 before a back injury limited him to one regular-season game and one playoff game last season.

“I think that there’s definitely some spots open,” quarterback and reigning MVP Aaron Rodgers said. “There could be interest in people not in the building right now. I’m not sure, I haven’t talked to Gutey (general manager Brian Gutekunst) about that. We need to see those guys step up and somebody take it over.”

So far, there’s been plenty of mixing and matching.

Royce Newman is working at right tackle as well as right guard, where he made 16 starts as a rookie last year. Yosh Nijman, who made eight starts at left tackle last season, has lined up at both left and right tackle.

“You just flip everything in your head and trust your instincts,” Nijman said of playing both tackle spots. “Being a professional, you go through these things a lot. It’s important that you be able to do something like that on the fly and have it be natural.”

Runyan is a returning starter at left guard. Myers was Green Bay’s starting center as a rookie when healthy last year, but played in only six games because of injury. Hanson hasn’t made a start over his first two seasons.

But the Packers continue to work out various combinations, and how they’ll arrange the line once Bakhtiari and Jenkins return remains uncertain.

Another possibility is rookie Zach Tom.

The fourth-round pick from Wake Forest, has earned first-team reps at each tackle spot during training camp while showcasing his versatility. He’s one of three linemen the Packers drafted this year, along with third-round pick Sean Rhyan of UCLA and seventh-round selection Rasheed Walker from Penn State.

“It’s about going out there, when they put you with the 1’s, they expect you to perform like a 1,” Tom said. “It’s not an excuse, that I’m a rookie, to not go out there and perform. I’m just trying to make the most of my opportunity and show that I can play in this league and be somebody that they can trust.”

Gaining that trust could be a gradual process for all these young linemen as the Packers wait for the return of Bakhtiari and Jenkins.

“We need to see them play well and have some really good moments so we feel good going into Minnesota and that pass rush that they’ve got,” Rodgers said.