Packers look to continue their recent mastery of Bears 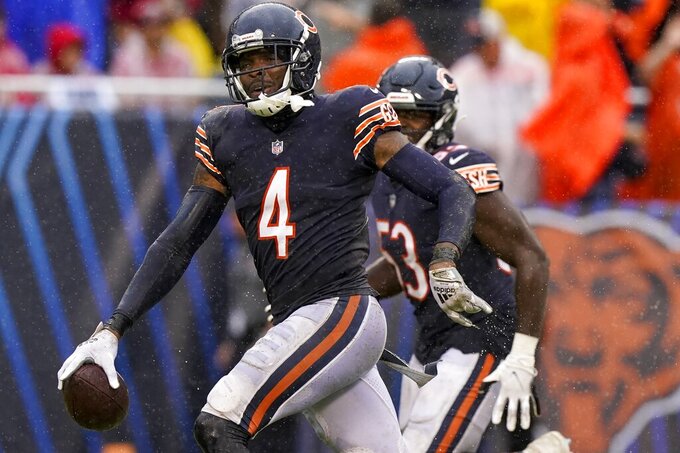 Chicago Bears' Eddie Jackson reacts after intercepting a pass during the second half of an NFL football game against the San Francisco 49ers Sunday, Sept. 11, 2022, in Chicago. (AP Photo/Nam Y. Huh)

TURNOVER DIFFERENTIAL: Bears plus-1; Packers minus-2

BEARS PLAYER TO WATCH: DE Robert Quinn. He set a single-season franchise record last year with 18½ sacks and got three of them in the Bears’ two meetings with the Packers.

PACKERS PLAYERS TO WATCH: RBs A.J. Dillon and Aaron Jones. They were the Packers’ only real threats on offense last week, combining for 94 yards on 15 carries plus eight catches for 73 yards. Packers coach Matt LaFleur has emphasized the importance of getting the ball in their hands more often.

KEY MATCHUP: Packers offensive line vs. Bears pass rush: Packers' Aaron Rodgers was sacked four times at Minnesota as the Packers played without projected starting tackles David Bakhtiari and Elgton Jenkins as they recover from knee injuries. Their status remains uncertain for Sunday. The Packers must deal with Quinn and Dominique Robinson, a rookie fifth-round pick from Miami (Ohio) who had 1½ sacks in his NFL debut.

KEY INJURIES: Bears OL Alex Leatherwood is on the non-football illness list and will miss at least four weeks. ... Bears OL Lucas Patrick (right hand) split time at right guard with Teven Jenkins against San Francisco, and it’s not clear how long he will continue to do so before moving back to center. Sam Mustipher started at center last week. ... Bears WR Velus Jones Jr. (hamstring) hoped to be available this week after missing the opener. ... Packers OG Jon Runyan Jr. (concussion) wasn’t practicing for the Packers early this week. ... Bakhtiari and Jenkins have been practicing on a limited basis this week. ... Packers WR Allen Lazard has been practicing on a limited basis after missing the Vikings game with an ankle injury.

STATS AND STUFF: Matt Eberflus became the fifth Bears coach to win his debut with the club, joining George Halas (1920), Neil Armstrong (1978), Dick Jauron (1999) and Marc Trestman (2013). He hopes to become the eighth Bears coach to win in his first trip to Lambeau Field. ... Bears QB Justin Fields was 8 of 17 for 121 yards with an interception last week. But he also threw two second-half touchdowns, including a 51-yarder to Dante Pettis. ... Bears S Eddie Jackson had an interception last week — his first since 2019 — that led to a touchdown. Jackson had 10 interceptions from 2017 to 2019, including six in his 2018 All-Pro season. ... Bears K Cairo Santos missed 2 of 3 PATs last week. ... The Packers were the only NFL team to go unbeaten at home during the 2021 regular season, though they fell 13-10 to the 49ers in a divisional playoff game at Lambeau Field. The Packers have won 13 straight regular-season home games, but have lost two playoff contests in Green Bay during that stretch. ... The Packers have never lost consecutive regular-season games within the same season under LaFleur, who has coached the team since 2019. ... The Packers have won 12 straight regular-season night games to match the longest such streak by an NFL team since 2000. The Indianapolis Colts won 12 straight from 2004-07 and the Pittsburgh Steelers matched that from 2007-09. The Packers are 11-0 in regular-season night games since 2020. ... Bears OC Luke Getsy was on Green Bay’s staff from 2014-21 and was the Packers quarterbacks coach the past two seasons. ... Packers OL coach Luke Butkus is the nephew of Bears Hall of Fame LB Dick Butkus. ... Patrick and Bears WR Equanimeous St. Brown played for the Packers last season. Packers P Pat O'Donnell was with the Bears.

FANTASY TIP: For the reasons outlined above, Jones and Dillon are worth starting if you have them on your rosters. While they figure to split time in the backfield, both should touch the ball plenty of times as the Packers work to get them more involved.