Panthers' Chinn eyes 'freedom' at safety after move from LB 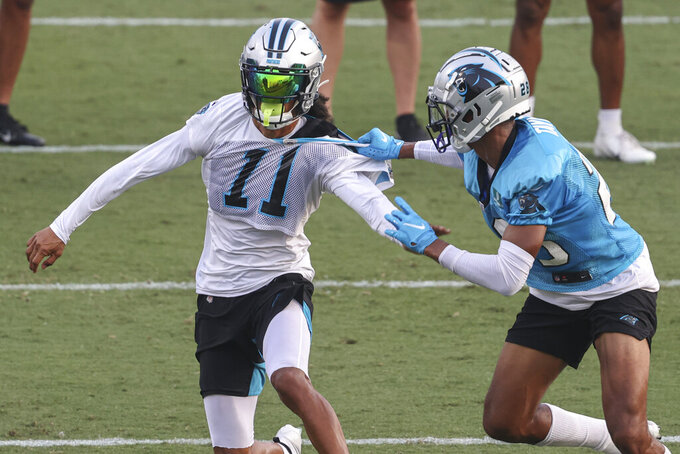 SPARTANBURG, S.C. (AP) — It's rare when an NFL team switches a player's position after a successful rookie season.

The Carolina Panthers are doing it anyway with Jeremy Chinn.

Chinn is moving to safety after finishing runner-up to Washington's Chase Young for 2020 NFL Defensive Rookie of the Year while playing mostly linebacker.

The second-round pick out of Southern Illinois had 117 tackles, two forced fumbles, a sack, an interception and returned two fumbles for touchdowns last year. Coach Matt Rhule and staff believe Chinn can be even more productive at safety.

The 6-foot-3, 221-pound Chinn played some deep safety as a rookie, but the more permanent move is designed to take advantage of his versatility and playmaking ability in the passing game — and bolster Carolina’s last line of defense.

“I want to see him play down around the line of scrimmage, but also play on the back end and play man (coverage) and pressure (the quarterback),” Rhule said. “I think he’s someone that we can just move all around the field.”

Despite his success last season at linebacker, Chinn is excited about the move, saying that playing safety is a “natural” position for him since that's where he played at Southern Illinois.

“They’re giving me a lot of freedom,” Chinn said. “We have certain rules, certain things I can and can’t do, but they’re definitely letting me play freely and making me feel comfortable.”

Panthers cornerback Donte Jackson said the hardest adjustment for Chinn is not being too aggressive at safety.

After Chinn spent last season in the middle of the defense, Jackson said the immediate tendency for his teammate is to attack the line of scrimmage. But that won't always be his role at safety.

“He’s working on slowing it down and letting the game come to him,” Jackson said. “He has a great understanding for football, so it hasn’t been a hard transition for him. He’s naturally aggressive, so you don’t ever want to take that away from him.”

The addition of Chinn is just part of how Carolina is upgrading the secondary, which Rhule considered the weakest part of the team last season given its struggles on third down. The Panthers allowed the NFL's second-highest conversion rate.

“You have a different affect on the game, playing closer to the line of scrimmage than playing deeper in the field,” Chinn said. “I’ll definitely still have my opportunities to make plays, just different plays.”

Chinn has some pretty good genes when it comes to playing safety.

Rhule was unhappy with the offense's performance at practice Monday, saying receivers were running the wrong routes resulting in interceptions and turnovers. He said there were too many mistakes overall with false starts, dropped passes and fumbles.

“Today was not good enough,” Rhule said of the offense.

He also added that the Panthers really need to get in full pads, get physical and “see who can really play.”

Starting outside linebacker Shaq Thompson mostly worked on the side with trainers after developing lower body tightness during Saturday night's practice. Bouye strained his groin during practice, ending his day early.