Panthers look to get even vs Falcons after OT loss 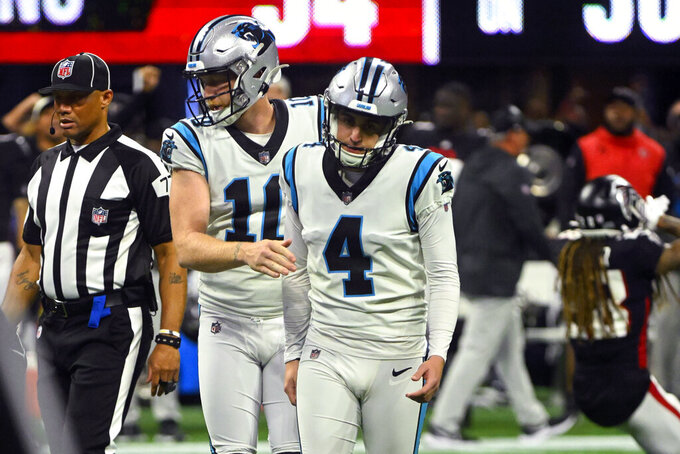 Carolina Panthers place kicker Eddy Pineiro (4) reacts after missing an extra point during the second half of an NFL football game against the Atlanta Falcons Sunday, Oct. 30, 2022, in Atlanta. (AP Photo/John Amis)

TURNOVER DIFFERENTIAL: Falcons plus-1; Panthers minus-4.

FALCONS PLAYER TO WATCH: LB Rashaan Evans leads Atlanta with 85 tackles, including at least five in every game this season. He had nine tackles with a sack against Carolina on Oct. 30. He has forced a fumble and recovered two fumbles this season. Evans has combined with Mykal Walker to provide leadership and stability in the middle of a defense which has struggled with injuries in the secondary and a lack of a consistent pass rush. Walker has at least nine tackles in five of the past six games and is second to Evans with 68 total tackles.

PANTHERS PLAYER TO WATCH: RB D’Onta Foreman ran for 118 yards and three touchdowns on Oct. 30 vs. Atlanta. Foreman didn’t get a chance to do much this past week as the Panthers fell behind quickly and were forced to throw. Prior to the Bengals game, he had put up back-to-back 118-yard rushing games.

KEY MATCHUP: Falcons RBs Cordarrelle Patterson/Tyler Allgeier vs. Panthers run defense. Patterson, who did not play in the first meeting, ran for two touchdowns against the Los Angeles Chargers on Sunday and could have a big game against Carolina. Rookie RB Tyler Allgeier set career highs in scrimmage yards (123) and yards rushing (99) last week and is fourth among rookies in rushing with 423 yards. The Panthers allowed the Bengals to rush for 241 yards and five TDs on Sunday. The Falcons are ranked fourth in the league in rushing at 162.9 yards per game which bodes well for the visitors.

KEY INJURIES: LG Matt Hennessy (knee) will be held out. With Elijah Wilkinson and Jalen Mayfield already on IR, Colby Gossett could get the start. ... The Panthers hope to get RB Chuba Hubbard back in the mix after he missed the past two games with an ankle injury. CB Donte Jackson is also dealing with an ankle injury but is expected to play.

STATS AND STUFF: Atlanta and Carolina combined for four fourth-quarter touchdowns in the Falcons’ 37-34 overtime win on Oct. 30. ... Atlanta has won eight of the past 10 games in the NFC South rivalry, but hasn't swept a regular-season series between the teams since 2019. ... The Falcons are the NFL’s only team with four players with at least 250 rushing yards. ... QB Marcus Mariota has passed for 635 yards with six touchdowns and two interceptions in the past four games. His 107.6 passer rating in that span ranks fifth in the league. ... The Falcons have drawn 49 penalties through nine games and are tied for third fewest in the league. ... TE Kyle Pitts had five catches for 80 yards and a TD in the first game against the Panthers. ... LT Jake Matthews’ 136 consecutive starts since 2014 is the NFL’s longest active streak. Only C Todd McClure (144) and QB Matt Ryan (147) have had longer streaks in team history. ... The Falcons’ seven games with at least 150 rushing yards is tied with the 1986 team for the most through nine games in team history. ... RB Cordarrelle Patterson has five TDs rushing in five games this season. ... The Panthers have lost 14 of their past 16 games going back to last season. ... Panthers QB P.J. Walker had a QB rating of 0.0 last week vs. Cincinnati before being benched at halftime with his team losing 35-0. Walker will start again this week with Baker Mayfield the backup. ... Panthers DE Brian Burns got his sixth sack last week. ... K Eddy Pineiro missed a potential winning extra point at the end of regulation and a potential winning field goal in overtime in the previous meeting.

FANTASY TIP: Panthers WR D.J. Moore had his best game of the season against the Falcons with 152 yards receiving, including a 62-yard TD off a desperation pass near the end of regulation.