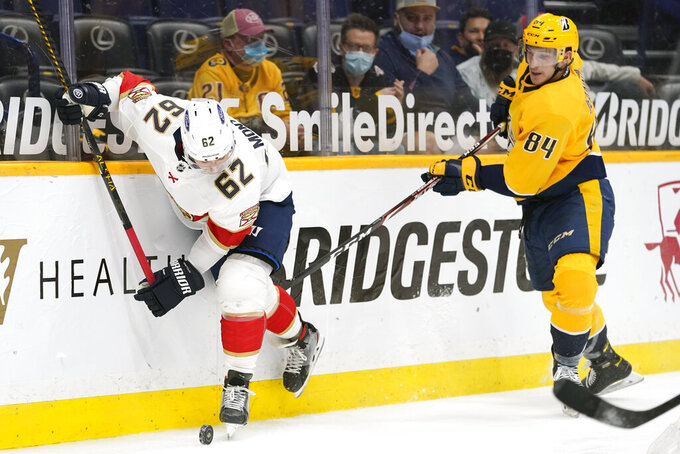 NASHVILLE, Tenn. (AP) — A wild third-period comeback sent the Panthers back to the playoffs.

Jonathan Huberdeau had two goals and three assists, and Florida rallied for a 7-4 victory over the Nashville Predators on Tuesday night to clinch a playoff berth.

Aleksander Barkov scored twice and had an assist for the Panthers. Anthony Duclair, Owen Tippett and Frank Vatrano also scored, while Sam Bennett had three assists in Florida’s second win in three games.

“Awesome feeling, something we’ve been waiting for a long time especially since I’ve been here,” Vatrano said. “We’ve been close many times. You know it feels good, really good. Guys are happy. We’re excited.”

Ryan Ellis scored twice and Luke Kunin and Tanner Jeannot also scored for the Predators, who had won three of four as they battle the Dallas Stars for the fourth and final Central Division playoff berth.

Trailing by a goal entering the third, Florida rallied on goals by Tippett at 4:57 and then Vatrano at 7:15 to complete the comeback. Huberdeau scored a pair of goals late in the third to complete the four-goal period for the Panthers.

“Obviously feeling good,” Huberdeau said. “I think it’s a big win, big third period for us. And obviously being in the playoff-clinching, it’s a plus.”

Ellis scored the game’s first goal at 6:07 of the opening period.

From above the right faceoff circle, Ellis fired a slap shot that beat Florida goaltender Sergei Bobrovsky high to the stick side. Ellis was aided by Kunin, who screened Bobrovsky from just outside of the crease.

“I don’t think that’s a game we’re very proud of,” Ellis said. “We’ve been moving in the right direction in a lot of games lately, tonight I think we took a step back. I think this group obviously is disappointed the way we played in front of our goaltender. He gave us a chance to win, but it didn’t come through.”

With the Panthers on a power play, Barkov snapped a wrist shot from above the left circle that beat Nashville goaltender Juuse Saros high to the short side.

Duclair’s power-play goal at 2:56 of the second gave Florida a 2-1 lead, but Kunin evened it up again at 6:50, tapping home the rebound from Calle Jarnkrok’s shot.

Nashville regained the lead at 12:40 of the second when Jeannot found the rebound of Roman Josi’s shot in the slot and slipped it by Bobrovsky for his third goal of the season.

Barkov tied it again at 17:32 of the second when his shot from the left side deflected off Josi’s stick and between Saros’ pads.

Saros stopped 49 of 55 shots. Both the number of shots faced and saves were new career highs for Saros.

“There was only one guy that deserved a better fate and that was Saros,” Nashville coach John Hynes said. “He played a really good game and we didn’t play a good team game.”

Late in the second, Ellis struck again when Matt Duchene sent a pass from below the goal line to Ellis in the right circle, where he beat Bobrovsky with a one-timer high to the far side.

Duchene’s assist was career point 600 for the Nashville center.

Spencer Knight replaced Bobrovsky at the start of the third. Bobrovsky made 17 saves on 21 shots faced.

Knight stopped all nine shots he faced in earning the second victory of his young NHL career.

With the assist on Jeannot’s second period goal, Josi took sole possession of first place for points among defenseman in Predators franchise history. The Nashville captain has 444 career points in 676 games played, all with the Predators.

Josi surpassed former Nashville and current Montreal Canadiens captain Shea Weber on the list. Weber played 763 games for the Predators from 2005-16 before being traded to Montreal in exchange for P.K. Subban.

Josi also moved into third place in franchise history for points by all skaters. He now trails just David Legwand (566) and Martin Erat (481).

MORE DEFENSE IN THE HOUSE

Saros started both ends of the back-to-back set with Florida. He has started nine straight and 14 of Nashville’s last 15 games.

Entering Tuesday, Saros’ .929 save percentage was the NHL’s best among goaltenders who have at least 25 games played. Saros has already posted a career high in wins with 18.

The Predators have a rare three-day break between games before hosting the Dallas Stars on Saturday.

Florida travels to Chicago for a pair of games against the Blackhawks on Thursday and Saturday.