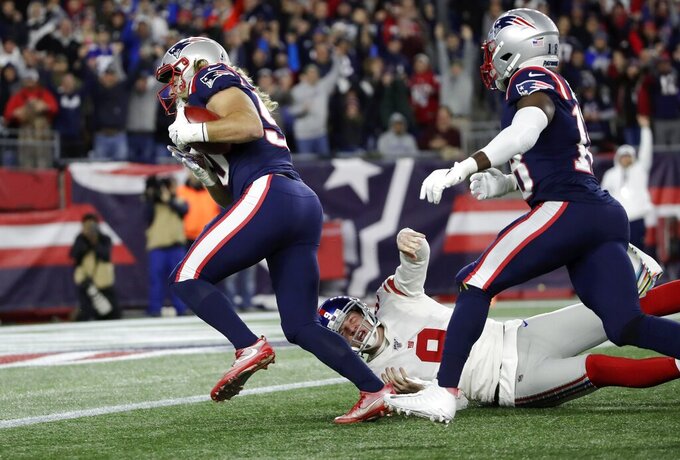 New England Patriots defensive end Chase Winovich, left, carries the ball to the end zone for a touchdown after a punt by New York Giants punter Riley Dixon, on the turf, was blocked in the first half of an NFL football game, Thursday, Oct. 10, 2019, in Foxborough, Mass. (AP Photo/Elise Amendola)

FOXBOROUGH, Mass. (AP) — Under coach Bill Belichick, the Patriots have made a habit of besting young quarterbacks.

They can add Giants rookie Daniel Jones to that list.

Tom Brady had two touchdown runs and moved ahead of Peyton Manning for second place on the NFL's all-time passing yards list as New England pulled away for a 35-14 victory over the New York Giants on Thursday night.

The reigning Super Bowl champion Patriots also returned a blocked punt for a touchdown and forced four turnovers, including a fumble return for a score, to move to 6-0 for the first time since time since 2015.

Brady finished 31 of 41 for 334 yards and an interception. Julian Edelman had his second straight 100-yard receiving game, catching nine passes for 113 yards. Jones had three interceptions on the night, finishing 15 of 31 for 161 yards.

New England has now won 19 straight games against a first or second-year quarterback, the longest such streak in NFL history.

"It was kind of an odd game, anytime you get three scores in the game that are non-offensive touchdowns," Belichick said. "That's kind of a season's worth and it all happened in one game."

The Patriots did it without running back Rex Burkhead, who missed his second straight game with a foot injury. Receiver Phillip Dorsett was inactive with a hamstring issue. During the game, receiver Josh Gordon injured his left knee trying to make a tackle after a fumble recovery.

"Guys just kind of filled in," Brady said. "We knew we weren't gonna have Phillip tonight. ... Then Josh got hurt. Just kind of dealing with kind of what everyone else deals with this time of year. Lots of injuries and attrition and so forth. But was a good win."

Despite struggling to move the ball for most of the game, New York (2-4) had the ball trailing 21-14 with 8:43 left in the fourth quarter.

Jones completed a pass to running back Jon Hilliman, who was hit in the backfield by Patriots linebacker Jamie Collins, forcing a fumble. Kyle Van Noy recovered, sprinted 22 yards and stretched the ball to the pylon for the touchdown.

It was part of an error-filled game by both offenses.

Like the Patriots, the Giants were missing some of their playmakers. Running back Saquon Barkley sat a third straight game because of a sprained right ankle, tight end Evan Engram sat with a knee injury and receiver Sterling Shepard was in the concussion protocol.

As a result, both teams had issues executing and hanging onto the ball.

Jones was confused at times by the Patriots' coverages, contributing to his turnovers. And Brady, in addition to his interception, had a fumble that was returned for a touchdown.

"I didn't play well by any means," Jones said. "I don't think it was overwhelming. I just made bad plays."

The Patriots moved swiftly on the opening drive, getting to the Giants 19. But Sony Michel was stopped for no gain on fourth-and-1.

New England took over in Giants territory for its third possession after Stephon Gilmore deflected a pass by Jones that was intercepted by John Simon. The Patriots gave the ball back on the next play when Janoris Jenkins picked off Brady's pass intended for Edelman.

New England broke the stalemate late in the first quarter when Riley Dixon's punt from the 6-yard line was blocked by Brandon Bolden and scooped up by Chase Winovich, who ran it in for the touchdown.

The Patriots then got the game's first offensive score on their sixth touch of the night when Brandon Bolden capped a five-play, 20-yard drive with a 1-yard run.

The Giants bounced back on their ensuing possession, with Jones connecting on a deep pass to Golden Tate, who sprinted for a 64-yard touchdown. It was the first passing TD given up by the Patriots this season.

The Patriots were just three plays into their next drive when Lorenzo Carter dragged down Brady for a 9-yard sack. Brady fumbled, and linebacker Markus Golden returned it 42 yards for a touchdown.

While trying to tackle Golden, Gordon got caught under a tangle of players and got his left leg pinned underneath him. He needed assistance as he limped off the field.

New England figured things out just before the half, getting a 1-yard run by Brady that capped an 11-play, 75-yard drive to put the Patriots ahead 21-14.

Giants: DL Olsen Pierre left in the second quarter with a concussion.

The Giants have given up at least 400 yards in four of their six games.

At 42 years and 68 days, Brady became the oldest player in the Super Bowl era to rush for two TDs in a game.