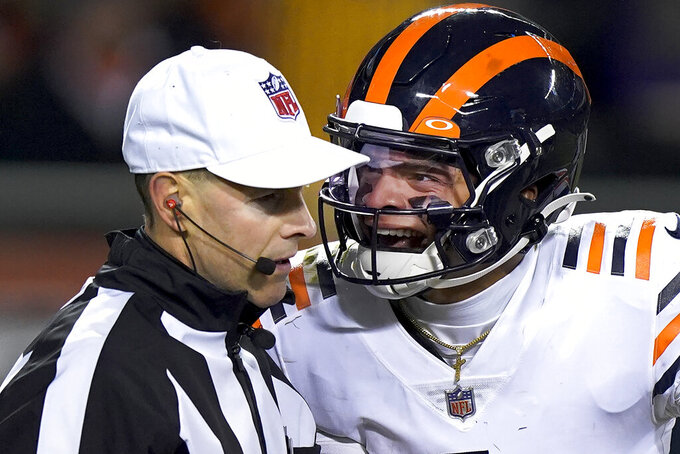 The penalties, the overall discipline issues, that was just too much for them to overcome.

Teez Tabor and Trevis Gipson were whistled for 15-yard penalties on a key Minnesota scoring drive in the third quarter, part of a flag-filled Monday night for the Bears in a 17-9 loss to the Vikings.

But the defense — watched closely by coordinator Sean Desai after he cleared COVID-19 protocol in time to coach against Minnesota — held up just fine without its entire starting secondary, limiting the high-powered Vikings to 193 yards.

“We definitely flew around, made some plays and whatnot,” linebacker Roquan Smith said. “But there was also some things that we didn't do and some things we can get better at.”

Cook, who rushed for 205 yards and two touchdowns in the Vikings' 36-28 win against Pittsburgh on Dec. 9, had 89 yards on 28 carries against the Bears. Jefferson finished with just four catches for 47 yards and a touchdown. Kirk Cousins was 12 for 24 for a season-low 87 yards.

Quinn and Akiem Hicks each had two sacks, and Graham was credited with three passes defensed in his NFL debut. But Chicago (4-10) hurt itself repeatedly in its eighth loss in nine games.

“When you don't score in the red zone and we had turnovers and penalties, that hurts you,” coach Matt Nagy said.

Trailing 10-3 at halftime, the Bears came up empty on the first possession of the second half. The Vikings then put together a 12-play, 77-yard drive that Cousins finished with a 7-yard touchdown pass to a wide-open Ihmir Smith-Marsette.

It looked as if the Bears stopped the Vikings twice before Smith-Marsette's TD, only to be whistled for costly penalties.

First, Tabor was flagged for a low block in a curious call after he went low to get to Cook on third-and-18 at the Minnesota 15. Then Trevis Gipson was called for unnecessary roughness after the Bears stopped Cook for a 2-yard loss on third down deep in Chicago territory.

The Bears finished with nine penalties for 91 yards, compared to seven for 54 for the Vikings (7-7).

“Honestly, some of these calls are starting to get a little crazy," Quinn said. “These refs seem like they control the game a little too much. ... I mean let guys play ball. Just a couple years ago, half of this stuff wouldn't even be called.”

Nagy was whistled for unsportsmanlike conduct in the first half after he became upset with a questionable unnecessary roughness penalty on safety Deon Bush, prolonging a Vikings drive that ended with Greg Joseph's 37-yard field goal.

“I won't repeat what was said,” Novak told a pool reporter. “But when it crosses a line and it's inappropriate, then that's when we throw a flag.”

After Smith-Marsette scored, the Bears' subsequent drive stalled after Teven Jenkins was flagged for unnecessary roughness. Fellow offensive lineman German Ifedi pushed Jenkins in frustration after the call and directed the rookie to the sideline.

Jenkins was penalized for going after defensive lineman D.J. Wonnum after he pushed Bears quarterback Justin Fields along the sideline on an incomplete pass.