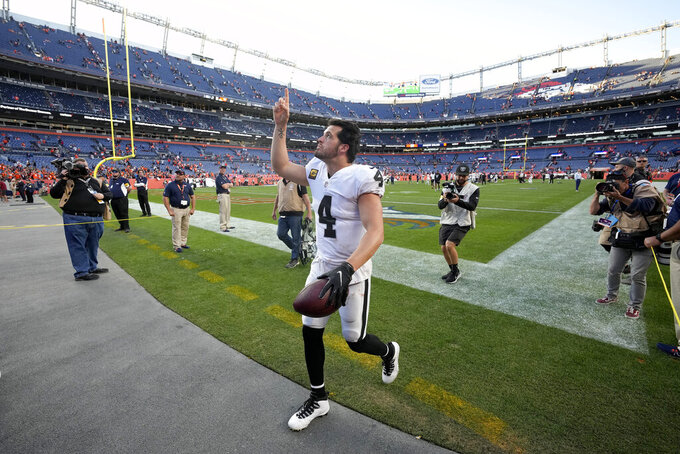 The Las Vegas Raiders season was in danger of spiraling out of control following two straight losses and the resignation of coach Jon Gruden when interim coach Rich Bisaccia told his players to meet on their own.

That meeting last Saturday night in Denver was followed by a win the next day against the Broncos, putting the Raiders (4-2) back on track in the AFC heading into Sunday's home game against the Philadelphia Eagles (2-4).

“Through the craziness of whatever you want to call what we’ve been through, we’ve gotten closer,” quarterback Derek Carr said. "We’re more unified and I think it’s a beautiful thing that something crazy could happen and a group of men could be even more unified and say, ‘You know what, we are going to lock arms even tighter.’ ... Hopefully it can carry us past just one win. Hopefully it can carry us the whole way.”

The Raiders showed resilience when they bonded together after Gruden's sudden resignation Oct. 11 because of offensive emails he sent before being hired in 2018.

They put together their most complete game of the season with the defense generating four takeaways and Carr sparking a big-play offense with 341 yards passing and two TDs in the 34-24 win.

There was also a calmness around the team

“Man, the sideline was just so, it was like, there wasn’t any anxiety," running back Josh Jacobs said. "It was weird. It was like everybody was calm, you didn’t have somebody cussing at you, or going crazy at the refs. None of that. Something bad happened and it was like, ‘OK, I'm not harping on it. Next play.’”

GET OFF THE FIELD

The Eagles have the NFL’s third-worst defense on third downs, allowing opponents to convert 46.2% in those situations. The average distance to go on third down against Philadelphia has been 6.6 yards.

“We’ve been in a lot in third-and-shorts,” defensive coordinator Jonathan Gannon said. “How do you become a good third-down defense? Get it to third-and-long. Well, to do that, you’ve got to play pretty good on first and second down. ... That really falls on me, how I call the game because when I’m aggressive and I call it aggressively, our guys perform. When we have been aggressive (on) early downs, there’s a pretty good clip where we’re getting it to where we want it to be on third down.”

Carr did a good job pushing the ball downfield last week with his average pass going a season-high 11.4 yards. That contributed to seven pass plays that gained at least 25 yards, the most in a game since at least 1991 as Henry Ruggs III, Bryan Edwards and others made contested catches for big plays.

The Eagles have scored just four offensive touchdowns in the first half this season and 11 in the second half, including seven in the fourth quarter. They rallied from a 15-6 deficit at halftime to defeat Carolina 21-18 two weeks ago. Last week, they came back from a 21-point deficit against Tampa Bay only to lose 28-22.

“We fail to be consistent enough to win,” quarterback Jalen Hurts said. “It’s all things we can control and that’s why we’re eager for this week. I know we have everything we need here. I believe that. It’s just a matter of doing it, just going out there and executing.”

Hurts’ inconsistency is part of the problem. He has missed several open throws, especially long ones, but also creates big plays at times.

“You go back and look at the tape and you talk through it mechanically, fundamentals and all that stuff, and then you just keep working it in practice to get him better,” offensive coordinator Shane Steichen said.

The Raiders' last game had a Crimson Tide feel to it. All four TDs for Las Vegas were scored by former Alabama players with Kenyan Drake getting two, and Jacobs and Ruggs scoring once each.

It marked the seventh time since the merger that three players from the same school scored TDs in the same game for one team.