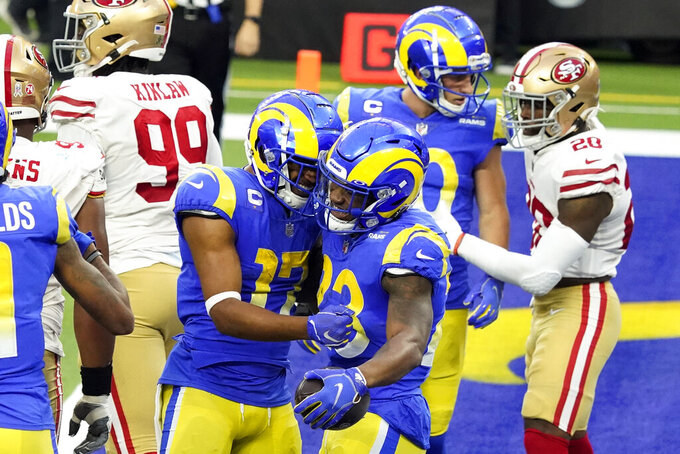 Los Angeles Rams running back Cam Akers (23) celebrates his rushing touchdown with Robert Woods (17) during the second half of an NFL football game against the San Francisco 49ers Sunday, Nov. 29, 2020, in Inglewood, Calif. (AP Photo/Alex Gallardo)

GLENDALE, Ariz. (AP) — The Arizona Cardinals haven't been very good the past few seasons, so many of their players haven't experienced a playoff push.

Veteran right tackle Kelvin Beachum has been through these types of games when he was with the Pittsburgh Steelers early in his career. Now with the Cardinals, he's got a message for his younger teammates: buckle up.

“This is real football,” Beachum said. “Not saying that earlier in the year wasn't real football, but we're in playoff football right now. You have to find a way to win in December to have a chance to be in the dance in a couple weeks.”

The Cardinals (6-5) host the Los Angeles Rams (7-4) on Sunday in an NFC West showdown between two teams that really need a victory. Both are coming off a frustrating loss and trail division-leading Seattle (8-3).

The Rams have dominated the series against the Cardinals in recent seasons, winning the past six games. They've also won five straight games in Arizona. But Los Angeles coach Sean McVay says Arizona has improved drastically since those meetings.

“This is a really good football team," McVay said. “What’s occurred in the past has nothing to do with this game. There is continuity at the coordinator spots, but these guys are playing really well. They have great playmakers in all three phases.”

One key matchup to watch: Arizona's three-time All-Pro wide receiver DeAndre Hopkins, who already has 967 yards receiving, will be trying to make big plays against a secondary that includes All-Pro cornerback Jalen Ramsey.

“He’s really shown what a complete defensive player he is,” Cardinals coach Kliff Kingsbury said. "So they’ll have a heck of a battle on Sunday, I’m sure.”

The Rams are playing an NFC West opponent in five of their final eight games, and they’re not off to a tremendous start against their division rivals.

Los Angeles was swept in its season series with San Francisco already this season, but managed to hold off Seattle at home three weeks ago. The Rams fell out of first place in the NFC West last week with their second loss to the Niners.

Los Angeles has had tremendous success against Arizona with those six straight victories under McVay, but the current Cardinals appear to be the best version of the franchise McVay has faced. If the Rams hope to win their third NFC West title in four years, they’ll have to maintain their mastery over Arizona while getting some help from Seattle’s opponents.

Arizona's offense has plenty of options, but one thing that made it so impressive during the first half of the season was Murray's running ability. He ran for at least one touchdown in five straight games from Oct. 11 to Nov. 15, and the Cardinals had a 4-1 record during that stretch.

But the past two weeks, Murray hasn't been as mobile. He ran for a season-low 15 yards against the Seahawks and 31 yards against the Patriots. Both games were losses. Murray says he doesn't have to run for the Cardinals to win, but there's little doubt that his scrambling ability can be a huge advantage.

While Arizona has one of the NFL’s best offenses, rookie Los Angeles defensive coordinator Brandon Staley’s group remains one of the best in the league. The Rams have allowed an NFL-low 17.0 points per game, and only one team has allowed fewer than their 297 yards per game. Opponents have only scored 4.4 points per game in the second half against LA.

All-Pro Aaron Donald is leading the way, and he reclaimed the NFL sacks lead last week during a monster performance against San Francisco. Ramsey typically draws coverage against the opponent’s top receiver, but cornerback Darious Williams is also having a remarkable season and providing shutdown work against opponents like Arizona with more than one elite receiver.

Arizona kicker Zane Gonzalez has had a roller coaster of a month, making some clutch kicks but also missing some backbreakers. In an Oct. 25 game against the Seahawks he missed an OT kick that would have won the game, got another chance and nailed a 48-yarder for the win. Against Miami on Nov. 8, he missed a potential tying 49-yarder in the final minutes and the Dolphins rallied for a 34-31 win. Against Buffalo on Nov. 15, he was a perfect 4 for 4 in a tight 32-30 win.

But then against the Patriots last weekend he missed what would have been a go-ahead 45-yarder with 1:52 left in the fourth period. New England rallied for a 20-17 win. Gonzalez is 16 of 21 on field goals for the season and Kingsbury says he still has confidence in the 25-year-old kicker.

The Rams’ running-back-by-committee approach hasn’t yielded much this season. Los Angeles is ninth in the NFL in yards rushing (1,371), but just 18th in yards per attempt (4.2). A poor game on the ground last week was artificially boosted by one 61-yard rush by rookie Cam Akers, who hasn’t been given consistent playing time until recently.

Darrell Henderson and Malcolm Brown are both outside the NFL’s top 25 in yards rushing per attempt. McVay’s inability to get the ground game going lately has put extra pressure on quarterback Jared Goff, who has responded with a rash of 10 turnovers in four games. The Cardinals’ 22nd-ranked run defense could provide an opportunity for the Rams’ three backs to get going.