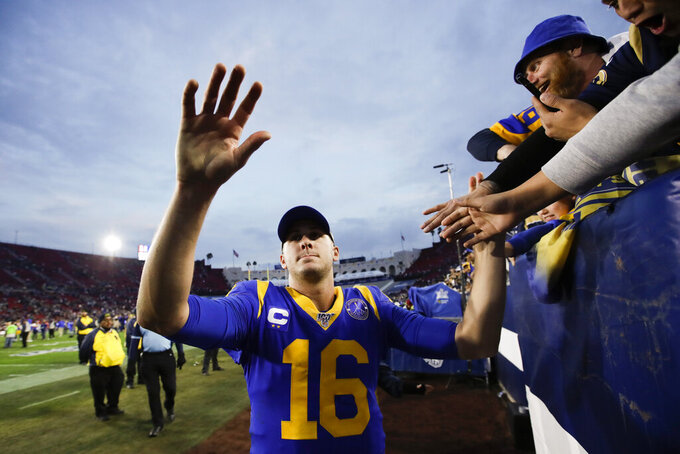 THOUSAND OAKS, Calif. (AP) — The Los Angeles Rams have learned all about the minuscule differences between a Super Bowl run and an early offseason.

Despite finishing 9-7, coach Sean McVay's team missed the playoffs for the first time in his three seasons in charge. One year after winning the NFC title and then betting heavily on this roster's ability to stay in the championship picture, the Rams fell short of the postseason entirely.

They're headed into an uncertain winter with little salary cap space, long-term commitments to players with significant question marks, and a nagging concern about whether that title window has closed a bit.

But the Rams publicly insist they're capable of getting back on top with largely the same star-studded group that fell just short this month when they move into palatial SoFi Stadium in 2020.

“We're the only (team with a) winning record in the league that didn’t make the playoffs,” left tackle Andrew Whitworth said Monday.

“The reality is you’re a couple of plays here or there from being a completely different season," added the 38-year-old Whitworth, who wants to return next season. "Realistically, you could count them on one hand, and that’s a whole different year. But the reality also is that you put yourself in the situation with those couple of plays, and that’s what we hadn’t done in the last couple of years.”

There were many small reasons for that big problem.

“It was just an up-and-down year,” receiver Robert Woods said. “Every single game, you never knew what you were going to get. The confidence was up and down, too. It was totally a different confidence than last season, for sure.”

From injuries to late-game mistakes, the Rams were hit with plenty of problems they had avoided in McVay's first two years. The young coach frequently referenced feeling worn-out in 2019, but he will have plenty of time to recharge around his offseason wedding.

“I’m never going to make excuses, and I’m certainly excited about learning all the things that this season entailed,” McVay said. “There’s a lot of things that I saw as a positive.”

The Rams essentially are tied to a core of McVay, quarterback Jared Goff, defensive tackle Aaron Donald and running back Todd Gurley. While Donald was his usual disruptive self, Goff and Gurley both took significant steps backward in both statistics and success.

Goff was blunt about his performance after passing for 4,638 yards with 22 touchdowns and 16 interceptions.

“Not nearly up to my standards," said the quarterback whose NFL-record $134 million extension doesn't even kick in until 2021. ”Not nearly up to where I want to be. Looking at the interceptions and turnovers, that’s the biggest area I can improve on. Overall, it wasn’t good enough, and it’s probably one of the main reasons we’re not in the playoffs.”

The Rams realize they could lose leading tackler Cory Littleton and elite pass rusher Dante Fowler as unrestricted free agents after both put together outstanding seasons. Their departures would leave significant holes on defense, and the Rams don't have much room to replace them. Other free agents include Zuerlein and stalwart defensive tackle Michael Brockers, an eight-year Rams veteran.

But the Rams believe they can overcome any changes.

“I think we have the guys,” Goff said. "It’s the same guys we went to the Super Bowl with last year, for the most part. It’s a good group, a solid core that you can build around. I feel good with what we’ve got."

Veteran safety Eric Weddle all but declared he wouldn't be back with the Rams after Sunday's victory. The six-time Pro Bowl selection doesn't want to be a backup, and he thinks it's “set in stone” that John Johnson and Taylor Rapp will be Los Angeles' starting safeties next season.

McVay downplayed Weddle's reaction Monday, suggesting their partnership might not be as finished as Weddle indicated. Weddle, who is under contract for next season, also might have more clarity after getting shoulder surgery.

“I want to see how he’s feeling,” McVay said. “I know there’s still so many emotions riding on just this season finishing up.”

NO WORD ON WADE

McVay gave the rest of the week off to his assistant coaches, and he made no announcement about the future of defensive coordinator Wade Phillips, whose three-year contract is up. Phillips' defense largely outperformed McVay's offense this year, yet McVay's lack of public support for Phillips rings clearly.

McVay, who turns 34 next month, will be making a significant statement about his belief in his own abilities if he elects to dump the 72-year-old veteran who helped him thrive as the youngest head coach in modern NFL history.

Rams general manager Les Snead has some work to do, and very little cap room with which to do it.

Aside from any additions on both lines and at the edge rushing positions, the Rams will have free-agent holes to fill without much cash. Restructuring Goff's contract or moving on from certain veterans will create room, but the executive who boldly traded away his next two first-round picks for Pro Bowl cornerback Jalen Ramsey this season has never hesitated to make a major move.

If the Rams can manage to re-sign at least one of Littleton, Fowler or Brockers, they could mitigate the upheaval necessary on defense. Their clearest offensive area of potential improvement is on the offensive line, but that might have to happen through the draft.

But most importantly, the Rams need McVay to answer this challenge with the resourcefulness that made him such a young success story. He knows his offense wasn't great this year, and his ability to adapt and improve as a playcaller and a leader will determine whether the Rams go up or down.