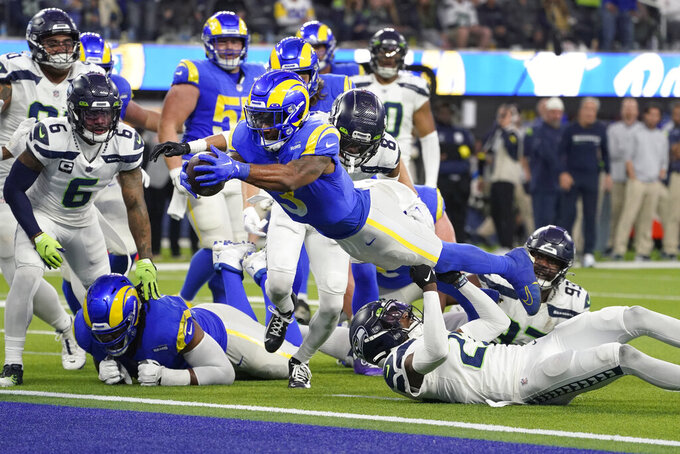 Los Angeles Rams running back Cam Akers dives into the end zone on a 6-yard touchdown run during the second half of an NFL football game against the Seattle Seahawks Sunday, Dec. 4, 2022, in Inglewood, Calif. (AP Photo/Mark J. Terrill)

Those small victories in a season full of big losses are just about all that's left for the Rams (3-9), who have lost six straight heading into a short week of preparation for a visit from the Las Vegas Raiders on Thursday night.

“It's football, man," receiver Brandon Powell said Monday. "You're going to win some, you're going to lose some. I just hope everybody keeps that same energy when the tide flips. That's all.”

The fact that the energy isn't perceptibly negative in the locker room of an injury-riddled team that has not won a game since Oct. 16 might be McVay's only impressive achievement this season.

The Rams have the worst 12-game record for a defending Super Bowl champion in NFL history, falling behind the 1987 New York Giants. They’ve got the longest losing streak ever suffered by a defending champ, and their .250 winning percentage is the lowest by any team at any point in the season after winning a ring, according to SportRadar.

Los Angeles’ 27-23 loss to Seattle on Sunday ensured the franchise’s first losing season under McVay. The Rams played without quarterback Matthew Stafford and All-Pros Aaron Donald and Cooper Kupp, along with an additional host of projected starters, because of injuries.

John Wolford passed for 178 yards in place of Stafford, and he has a stiff neck that could affect his preparation. McVay isn't sure whether Wolford or Bryce Perkins will start against the Raiders.

No matter which quarterback takes the field, he will know that if the Rams don't beat Vegas, they will go two full months without a victory while falling farther into post-Super Bowl infamy.

“Fortunately, it’s a short week," McVay said. "We’ll turn around and we’ll see if we can continue to try to go in the right direction. This is challenging, but I am proud to be going through this with these guys, and this is where real growth can occur.”

Los Angeles' terrible rushing offense is showing signs of life after picking up 171 yards on the ground against Seattle. Cam Akers had 60 yards and two TDs, while wideouts Powell and Tutu Atwell combined to rush for 68 yards on seven jet sweeps and similar plays. Powell had a career-high 84 total yards.

The defense soundly outplayed the offense for the first two months of the season, but Los Angeles is yielding 374 yards and just under 27 points per game over the past four losses. The Rams' secondary is unimpressive, and Bobby Wagner has been the only consistent standout in the front seven, even before Donald was hurt.

Michael Hoecht — the Rams' undrafted, 310-pound, Ivy League defensive tackle from Canada — is showing remarkable acumen as an edge rusher. He got the first two sacks of his NFL career against Seattle, along with three quarterback hits, a tackle for loss and a forced fumble — and he did it in front of his grandfather, who was attending his first NFL game. Hoecht already is more productive than Justin Hollins, who had one sack in 10 games before being cut, and injured Terrell Lewis, who has one sack in 11 games.

Wolford has mobility and decent accuracy, but his relatively weak arm strength was exposed on several throws against the Seahawks, and it must be reflected in McVay's game planning. Along with a gallery of underthrows and curious choices, Wolford has only one touchdown pass — a meaningless last-minute score in a loss last month — in four career NFL starts.

Stafford is likely to miss the rest of the season with his bruised spinal cord, but McVay said Monday that the injury isn't expected to be a long-term health problem, and the quarterback should have “a good, healthy offseason.” ... McVay expects CB David Long Jr. to be out Thursday with a groin injury, likely creating more playing time for rookie Cobie Durant.

6 — A career-high touches in the first career start for Atwell, the Rams' much-debated second-round pick in 2021. The 5-foot-9 speedster turned them into a career-high 71 total yards with two receptions and four rushes. Wolford underthrew Atwell on what would have been a long touchdown reception, and Atwell barely missed a 22-yard TD catch as well when he couldn't get his second foot inbounds. McVay has finally given Atwell his first regular role on offense over the past two weeks, and the coach acknowledged Monday that he should have utilized Atwell's talents sooner.

The short turnaround is physically demanding, but the Rams can build quickly on the offensive concepts that worked against Seattle. A win over a franchise that's still beloved in Southern California would be an enormous relief for McVay's group. If not, the Rams will match their longest skid since moving home to LA.