Ravens believe they're ready for Round 3 vs. Henry, Titans 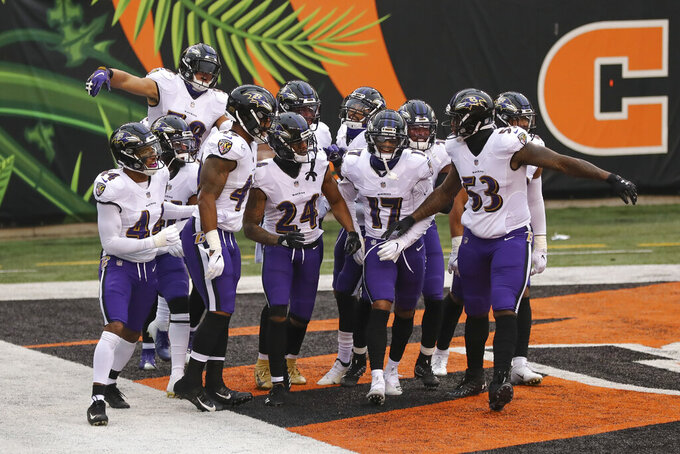 The Baltimore Ravens defense celebrates with cornerback Marcus Peters (24) after he intercepted a pass in the end zone intended for Cincinnati Bengals wide receiver A.J. Green during during the second half of an NFL football game, Sunday, Jan. 3, 2021, in Cincinnati. (AP Photo/Aaron Doster)

NASHVILLE, Tenn. (AP) — Defensive end Calais Campbell knows the time has arrived to prove why Baltimore traded for him last March: It's Round 3 of the Ravens vs. Derrick Henry.

A spot in the AFC divisional round is on the line Sunday.

Henry helped the Titans stun the top-seeded Ravens a year ago in the divisional round as the NFL rushing leader ran for 195 yards, threw a touchdown pass and turned Baltimore safety Earl Thomas into his blocker with a stiff arm at one point.

Baltimore traded a fifth-round pick to Jacksonville for Campbell last March, and the six-time Pro Bowl end missed Round 2 on Nov. 22 when Henry ran for 133 yards — 89 on 10 carries in the fourth quarter and overtime — in a 30-24 win capped by his 29-yard TD run.

“Derrick Henry is one of the best running backs to ever play this game, and he’s in the zone right now,” Campbell said. "So, yes – I take pride in the challenge of lining up and trying to shut him down.”

Ravens nose tackle Brandon Williams also missed that game but is available for this one. The No. 5 seeded Ravens (11-5) have won five straight, including last week's 38-3 rout of Cincinnati.

“Now we get to see them again in the same scenario,” Williams said. “Obviously, we have that sense in it, and we know what happened last year. And, obviously, we don’t want the same thing to happen.”

The Titans (11-5) have the hometown advantage this time around, though that may not help in a rivalry in which neither Baltimore nor Tennessee has won on its own field in four previous games. They do have Henry.

He just became the first back-to-back NFL rushing champ since LaDainian Tomlinson in 2006-07 with a career-high 2,027 yards, and Henry ran for a career-best 250 yards helping Tennessee clinch its first AFC South title since 2008 with a 41-38 win at Houston.

Now Henry is heading into the postseason, where he has really thrived. Only Terrell Davis (672) and John Riggins (640) have more rushing yards through a player's first five postseason games than Henry (630).

“We all know what’s at stake," Henry said. "Win or go home, and when you win you keep playing.”

Stopping Henry is merely the first priority for the Ravens’ defense. There’s also the matter of containing Titans quarterback Ryan Tannehill, who threw for 3,819 yards with a career-high 33 touchdowns and only seven interceptions during the regular season.

These playoffs include quarterbacks Tom Brady, Patrick Mahomes, Russell Wilson, Jackson and several other notable stars. Tannehill may not carry the reputation of those stars, but he’s still a big threat throwing a pair of TD passes in each of the last two games against Baltimore.

“I think he’s much better than a lot of people have given him credit for over the years,” Harbaugh insisted.

The Ravens overcame an outbreak of COVID-19 that forced Jackson and several others to miss at least one game and was the main culprit in a three-game skid that left Baltimore with a 6-5 record in December.

That’s one big difference in this team from last year’s squad, which entered the playoffs riding a 12-game winning streak. This group, according to Jackson, grew stronger because of that rough stretch and is also drawing incentive from perhaps being a bit overlooked as a No. 5 seed.

“We’re motivated from what went on, the adversity with the COVID-19 outbreak – some guys missing games because of it,” Jackson said. “Our team is just hungry right now, and that’s just what we need. We need to be hungry; we need to be doubted. I feel like we play better like that.”

This game matches the NFL's top two rushing offenses. The Ravens average 191.9 yards per game with Jackson, rookie J.K. Dobbins and Gus Edwards. The Titans are second with 168.1 yards, and Tannehill matched Jackson with his own career-high seven TD runs. Henry also led the NFL with 17 rushing TDs.

The problem with losing in the playoffs is that it takes a year’s worth of waiting to get a second chance to make things right. The Ravens have some new faces preparing for the ride, but this team is mostly comprised of players who experienced the crushing disappointment of last year’s early exit.

“For us, the sky is the limit,” tight end Mark Andrews said.

The veteran lineman couldn't finish last week's 41-38 win in Houston because of an injured ankle but plans to play Sunday.

“There's no way that I would sit out of an opportunity like that,” Saffold said.