Reich wants Indy to use lessons learned for playoff run 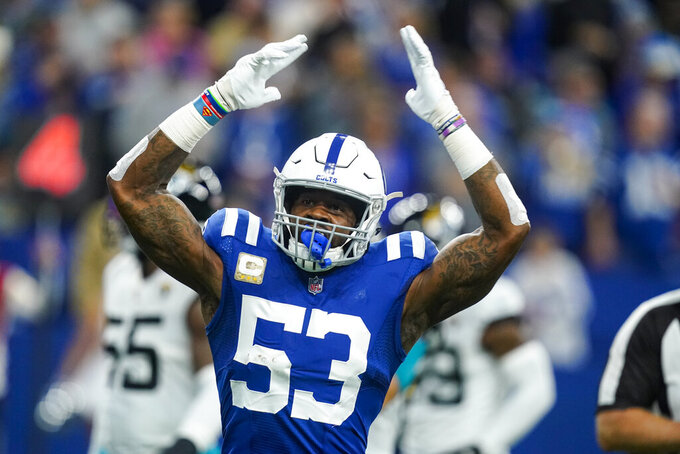 Indianapolis Colts outside linebacker Darius Leonard (53) celebrates a defensive stop against the Jacksonville Jaguars in the first half of an NFL football game in Indianapolis, Sunday, Nov. 14, 2021. (AP Photo/Darron Cummings)

He challenged the Colts to use the lessons they learned from winning four of their last five to propel them into the playoffs, and make a deeper run than most expect.

Reich believes it's not just possible, it's plausible.

“There are a lot of good teams in the AFC, but no one’s just taken over, so why can’t it be us?" he said. “Why can’t the Indianapolis Colts take over right now? That’s our mindset. If we’re going to do it, we've got to prove it this weekend in Buffalo against a very good football team."

Sure, Indianapolis faces an uphill climb after getting to .500 for the first time this season. But the reality is the AFC is wide open. While the Bills and Kansas City Chiefs started this season as conference favorites, Tennessee (8-2) has emerged as the top team through 10 weeks. The Titans hold a three-game lead over Indy in the AFC South and have swept the Colts in the season series, essentially making it a four-game difference.

Beyond Tennessee, it's anybody's guess.

Nine teams are within two games of Buffalo and Baltimore, both 6-3, including the Colts, who can cut the gap in half with a win on the Bills' home turf.

Still, they've faced longer odds. After starting 0-3, just getting back into the playoff conversation was a major feat.

Now there's a growing sense inside the locker room that the improving Colts are building the kind of momentum that could lead them to another fantastic finish.

“I think we’ve shown some really, really bright spots of how well we can play together," center Ryan Kelly said. “Great teams in November, December, they put those games together. I think we’re heading in the right direction.”

Turnovers. At training camp, the Colts made one goal clear: 40 takeaways this season. Through 10 games, they're No. 2 in the league with 21 and Sunday's fumble recovery with 50 seconds left sealed the win.

Finishing touches. The arduous journey back to .500 could have been easier had Indy developed a knockout punch. It blew fourth-quarter leads against the Los Angeles Rams and Baltimore Ravens, losing both, and also lost in overtime against Tennessee. On Sunday, the Colts even let the Jags hang around after taking a 17-0 first-quarter lead.

Jonathan Taylor. The second-year running back has become the key to Indy's offense. He's tied with the injured Derrick Henry for the league lead in yards rushing (937). And if he has another game with 100 yards from scrimmage and a TD , he'll tie LaDainian Tomlinson and Lydell Mitchell for the longest such streak in the Super Bowl era (eight).

T.Y. Hilton. Injuries have limited the 32-year-old, four-time Pro Bowl receiver to three games. He returned Sunday after clearing the concussion protocol but had only one reception for 5 yards. Hilton has caught half of his 14 targets this season for 101 yards and no touchdowns.

All-Pro left guard Quenton Nelson and two-time All-Pro linebacker Darius Leonard left the game briefly with what appeared to be ankle injuries. But both finished the game and Reich said he expected Nelson would play at Buffalo. Reich said he had not yet spoken with Leonard.

7 — With seven playoff spots available and seven games remaining on the schedule, Indy is one of seven five-win teams in the AFC trying to position itself for a postseason trip.

Sure, getting to .500 is a big deal. But if the Colts want to make the playoffs for the second straight season and the third time in four years, they'll likely need a winning record. A win at Buffalo, in potentially nasty November weather, would be a major leap forward.