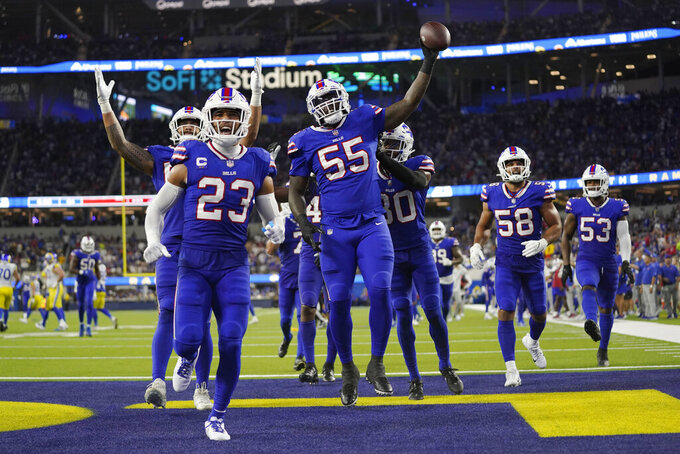 Buffalo Bills defensive end Boogie Basham (55) celebrates with teammate after interception a pass during the second half of an NFL football game against the Los Angeles Rams Thursday, Sept. 8, 2022, in Inglewood, Calif. (AP Photo/Mark J. Terrill)

ORCHARD PARK, N.Y. (AP) — Bills quarterback Josh Allen feigned ignorance when asked if he winced while watching video of him getting stuffed on fourth down near the goal line in the final seconds of a loss to Tennessee last year.

“What fourth-down play?” Allen said, shrugging his shoulders before winking to let on he knew exactly the play being referenced.

As Buffalo prepares to face the Titans on Monday night, no one has forgotten the teams' last meeting.

Down 34-31, the Bills marched 79 yards and faced fourth-and-1 at the Titans 3 with 22 seconds remaining. A combination of Allen’s foot slipping and Titans defensive tackle Jeffrey Simmons blowing up the left side of the Bills line led to the quarterback being stopped for no gain.

“I’m just kidding,” Allen said. “And yeah, you don’t need to watch that one.”

The loss sent Buffalo into a midseason tailspin. The Bills dropped five of eight before rallying to win their second consecutive AFC East title. Meanwhile, the Titans' victory helped propel them to the AFC's top seed.

The play was also the latest in a series of memorable moments between the two American Football League charter members and non-division AFC rivals, who are set to meet for a fifth consecutive season and third straight in prime time.

There was, of course, “The Comeback” in which the Bills erased a 32-point deficit to beat the then-Houston Oilers in the 1992 season playoffs. Then came the “Music City Miracle” in which the Titans scored the decisive touchdown on a kickoff return in the final seconds of the 1999 season wild-card playoffs. Two years ago, video of Titans running back Derrick Henry’s stiff-arm bowling over Bills cornerback Josh Norman went viral in Tennessee’s 42-16 win.

“You remember things from every season that carry with you, highs and lows,” Bills coach Sean McDermott said. “But we’re really focused on this game this week.”

The Bills can play down what happened all they want. The Titans aren’t buying.

“I guarantee that’s the message in their building right there. They’re probably playing that play when Jeff made the goal-line stop,” two-time All-Pro safety Kevin Byard said. “I’m sure that they obviously want to get payback for sure.”

The Titans have motivation of their own following a 21-20 season-opening loss to the New York Giants. Tennessee squandered a seven-point lead in the final two minutes, had the usually reliable Randy Bullock miss a 47-yard field-goal attempt as the clock expired, and was second-guessed for not leaning more on its workhorse, Henry.

“We left a lot of meat on the bone running the football,” Titans coach Mike Vrabel said.

The Bills are riding high entering their home opener, coming off a 31-10 season-opening rout of the Super Bowl champion Los Angeles Rams.

The sting of last year’s defeat plus the familiarity of the Titans is keeping the Bills grounded.

“They’ve given us problems for the last couple of years, and we all know what happened last week,” Allen said. “They’re going to be a motivated team coming into our stadium.”

Tennessee ranked second in the NFL last season defending the run, giving up 84.6 yards per game, and allowing more than 100 just twice. In the opener, the Titans gave up 238 yards rushing. It was their worst performance since allowing 281 yards in a loss at Houston on Nov. 26, 2018.

Tennessee played eight rookies in its opener, starting Roger McCreary at cornerback and Nicholas Petit-Frere at right tackle. Three rookies combined to catch 10 passes for 132 yards, and Kyle Philips, a fifth-round selection out of UCLA, led the Titans with nine targets. He caught six for 66 yards.

Henry had 21 of the 26 rushes in the Titans’ opening loss, and finished with 82 yards. A couple of holds wiped out runs that would have put him over 100 yards. He has 28 100-yard rushing games for his career in the regular season and playoffs combined. Henry needs 121 yards to become the fourth player in franchise history to reach 7,000 for his career, trailing Eddie George (10,009), Earl Campbell (8,574) and Chris Johnson (7,965).

Von Miller has kept a close eye on Henry because the two are essentially the same size (6-foot-3 and 250 pounds), and the Bills pass-rushing specialist always wanted to play running back.

“I'm living my running back dreams through him,” Miller joked, before rejecting the idea of pretending to be Henry on Buffalo's scout team in practice. “It would be fun. But I let those guys do that.”