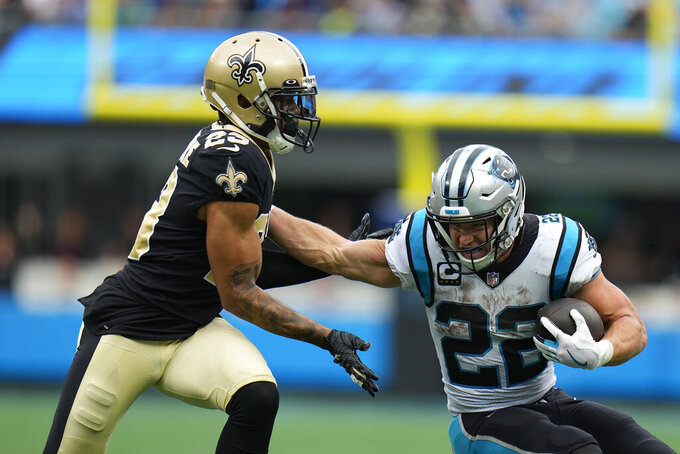 CHARLOTTE, N.C. (AP) — Panthers coach Matt Rhule said he is “very hopeful” that running back Christian McCaffrey will play Sunday against the Arizona Cardinals after missing the last two days of practice with a quad injury.

McCaffrey returned to practice on a limited basis Friday and is listed as questionable on the team’s injury report.

McCaffrey ran, cut and caught passes during the 20 minutes of practice that were open to the media inside the team’s bubble.

“He looked good out there today,” Rhule said. “Unless something comes up I’m sure he will give his best chance to go. We are very hopeful.”

When asked how he feels and if he expects to play Sunday, McCaffrey replied: “I feel great.”

He repeated the same answer several times on various follow up questions, clearly not wanting to elaborate on his health.

When asked how he felt playing last week against the New Orleans Saints, McCaffrey said: “You are going to play with stuff. Things happen.”

McCaffrey missed 23 of 33 games the previous two seasons due to injuries.

Rhule said it’s uncertain if the team would limit McCaffrey’s workload on Sunday, and he's not worried about McCaffrey missing two days of practice.

“He has a lot of reps in the bank,” Rhule said. “He does a lot of stuff extra, so while he might not be in there in a team period he might stay after with Baker (Mayfield) and run routes or get all of his ball handling in. We don't change what we do in the run game so he knows those things. And he is the ultimate professional. He prepares at a high level. There are never any concerns with those things.”

McCaffrey enters Week 4 tied for fifth in the NFL in the league in rushing and is coming off back-to-back 100-yard rushing games against the New York Giants and New Orleans Saints.