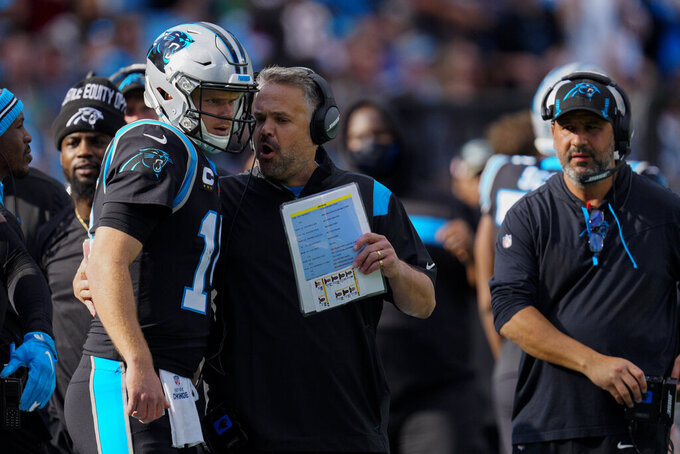 NEW ORLEANS (AP) — For the New Orleans Saints and Carolina Panthers, this has been a season of upheaval and disappointment.

Yet their late-season meeting on Sunday holds NFC playoff implications for New Orleans and could influence the longer-term trajectories of both teams.

“It’s been a challenging year for a lot of reasons,” said Saints quarterback Taysom Hill, who missed two games because of a concussion earlier this season, has been playing through a throwing-hand injury since Dec. 2 and had to sit out Monday night's 20-3 loss to Miami because of a COVID-19 outbreak that decimated the Saints' roster.

“You compete from July (when training camp starts) until now to have an opportunity to get to postseason play and then you have to deal with more things," Hill said.

The Saints (7-8) still have a realistic chance to make the playoffs, but need some help.

New Orleans, Atlanta and Minnesota are one game behind San Francisco and Philadelphia for the last two NFC playoff spots with two games to go.

“We’re still right in the middle of it and we’re going to control what we can control,” said Hill, who could bolster his credentials as an NFL starter if he performs well. “I think we’ve been able to persevere pretty well to where we’re still in the hunt.”

Should the Saints — who won the NFC South the previous four seasons — succeed in making the playoffs again this season, they'll have overcome as much difficulty in doing so as any team in the league.

Their first season since the retirement of Saints career passing leader Drew Brees began with displacement to Dallas for nearly a month because of Hurricane Ida. That led the NFL to move New Orleans' first home game to Jacksonville, Florida.

Between injuries, COVID-19 outbreaks and coaching decisions, the Saints have started four quarterbacks this season. After Jameis Winston was lost to a knee injury, Trevor Siemian took over for four games — all losses. Hill then started three games — winning two — before the virus outbreak that landed Hill and Siemian on COVID-19 reserve list and left the Saints little choice but to start rookie Ian Book against the Dolphins.

Sam Darnold, who was acquired before this season from the New York Jets, is resuming the starting role he lost to injury earlier this season.

Darnold led the Panthers to a 26-7 win over the Saints in Week 2, completing 26 of 38 passes for 305 yards with two touchdowns and one interception.

“That was probably his best game,” Rhule said. Darnold "threw the ball on time, was aggressive with his throws, but didn’t have the catastrophic mistakes.”

Darnold replaces Cam Newton, who returned to his first NFL team in November but has started throughout a five-game skid.

That losing steak has turned up the heat on Rhule, who could use a strong finish to improve his prospects for keeping his job.

Of the 16 Saints players taken off the active roster last week because of COVID-19, 15 were back by Thursday. Those returning have included starters such as Hill, linebackers Demario Davis and Kwon Alexander, safety Malcolm Jenkins and tight end Adam Trautman.

The Panthers, meanwhile, added safety Kenny Robinson and defensive end Darryl Johnson to their COVID-19 list, which grew to 14 players before reserve defensive back Melvin Rashaan was re-activated on Thursday.

Cornerback had been one of Carolina’s deepest positions, but now the Panthers extremely thin after Stephon Gilmore was ruled out for Sunday with a groin injury. Gilmore is the fourth Panthers cornerback to go down with an injury this season, joining Jaycee Horn, Donte Jackson and A.J. Bouye on the sideline.

C.J. Henderson, a 2020 first-round draft pick of the Jacksonville Jaguars, and Keith Taylor are expected to start Sunday against the Saints.

Statistically speaking, the Saints' offense is producing at its lowest level since coach Sean Payton took over in 2006 with Brees as his QB. New Orleans ranks 31st in the NFL with 301.9 yards per game and 31st in passing (187).

QB changes are only part of it. Top receiver Michael Thomas has missed the entire season because of a setback while recovering from offseason ankle surgery. Dynamic running back Alvin Kamara missed four games with leg injuries. But for Payton, a development that has hampered both run blocking and pass protection has been the absences of left tackle Terron Armstead (seven games) and right tackle Ryan Ramczyk (six games). Armstead (knee) didn't practice Thursday and Ramczyk, who is recovering from a knee injury, was still on New Orleans' COVID-19 list.

Missing "both tackles, especially those two, I think that’s been a big challenge,” Payton said.

Carolina’s offense has struggled for the most part this season, but it's hard to pin that on wide receiver D.J. Moore.

Moore has been a model of consistency for Carolina with three straight 1,000-yard seasons. He ranks 14th in the league in yards receiving (1,041) and is tied for 13th in receptions (83). Since Week 1 of the 2019 season, Moore has 3,409 receiving yards, fifth most in the NFL over that span.