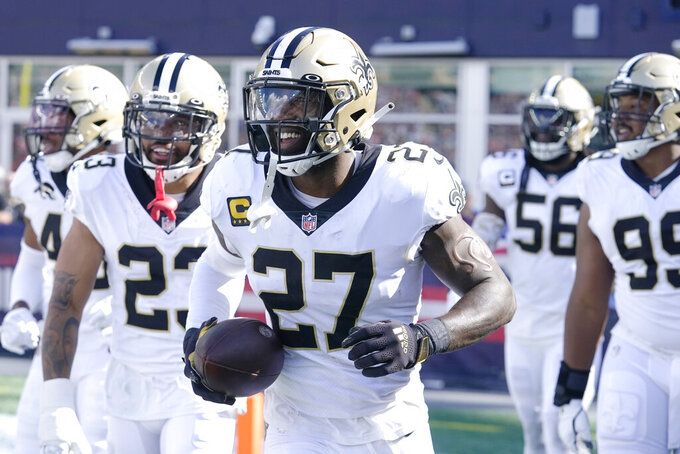 New Orleans Saints strong safety Malcolm Jenkins (27) smiles after his touchdown against the New England Patriots during the second half of an NFL football game, Sunday, Sept. 26, 2021, in Foxborough, Mass. (AP Photo/Steven Senne)

OPENING LINE: Saints by 7 1/2, according to FanDuel SportsBook.

TURNOVER DIFFERENTIAL: Giants plus-1; Saints plus-5.

GIANTS PLAYER TO WATCH: After missing the first two games with calf injury, the Pro Bowl TE Evan Engram returned last week with a performance that induced Giants fans to boo him. He had two catches for 21 yards and lost a fumble. When he could not catch a tipped pass in the third quarter, fans cheered when he left the field. Look for him to respond this week.

SAINTS PLAYER TO WATCH: Deonte Harris' 19 yards per punt return leads the NFL. He also leads New Orleans in yards receiving with 112, highlighted by his 55-yard TD in Week 1.

KEY MATCHUP: The Saints' defense ranks third in the NFL in yards allowed per game at 60.3 as they prepare to face a Giants ground game averaging nearly 108 yards per game, led by mobile QB Daniel Jones and RB Saquon Barkley.

KEY INJURIES: Giants ILB and leading tackler Blake Martinez is out for the year with an ACL injury sustained on a non-contact play last weekend. Starting WRs Sterling Shepard and Darius Slayton are trying to recover quickly from hamstring injuries from the same game. ... WR Kenny Golladay has been playing with a nagging hip problem. ... Saints LT Terron Armstead left last weekend's game with an elbow injury that could sideline him several weeks. ... C Erik McCoy has missed most of the first three games with calf injury.

SERIES NOTES: New York hasn’t won in the Superdome since 1993. ... The Saints have won five of seven meetings since Sean Payton, a former Giants offensive coordinator, became the head coach in New Orleans in 2006. New Orleans has won all three meetings in the Superdome with Payton at the helm. ... The Saints have won nine of 13 home games against the Giants, although one of those four losses came at Giants Stadium in a game moved because of Hurricane Katrina in 2005.

STATS AND STUFF: Giants QB Daniel Jones has rushed for two touchdowns and a 2-point conversion this season and leads the team in rushing with 161 yards on 23 carries. He has four straight games with a 90-plus quarterback rating. ... Giants RB Saquon Barkley’s touchdown last week was his first since sustaining an ALC injury more than a year ago. He has 39 rushes for 134 yards. ... Giants WR Kenny Golladay had four catches for 64 yards against Atlanta, while WR Collin Johnson had a career-high five catches last week after Shepard and Slayton were hurt. ... Giants LB Tae Crowder had a team-high 11 tackles last week. ... After getting 11 ½ sacks last season, Giants DL Leonard Williams got his first against the Falcons. While with the Jets in 2017, he had an interception in his only game against the Saints. ... Giants rookie LB Azeez Ojulari had a strip-sack last week. He is looking to become the third rookie since 1982 with a sack in each of his first four games. Santana Dotson of Tampa Bay (1992) and Terrell Suggs of Baltimore (2003) are the others. ... The Saints will be playing their first game in the Superdome this season after their Week 1 home game against Green Bay was moved to Jacksonville, Florida, because of Hurricane Ida. ... The Superdome is preparing to host its first capacity crowd for a Saints game since New Orleans lost a playoff meeting with Minnesota on Jan. 5, 2020. ... Saints QB Jameis Winston has seven 7 TDs and two INTs this season. Winston ranks 32nd in the NFL in yards passing per game with 129. ... Saints S Malcolm Jenkins had seven tackles, two passes defensed and a 34-yard interception return for a touchdown last week. He has eight career defensive TDs. ... Saints CB Marshon Lattimore had a team-high 10 tackles and his 11th career INT in Week 3. ... Saints reserve QB Taysom Hill had his first TD rushing of the season and 12th of his career at New England. ... Saints WR Marquez Callaway had 41 yards receiving and his first career TD receiving.

FANTASY TIP: Saints running back Alvin Kamara had 118 scrimmage yards (89 rushing, 29 receiving) last week, when he made his second touchdown catch of the season. The dynamic Kamara's productivity is only bound to improve as he develops chemistry with Winston.