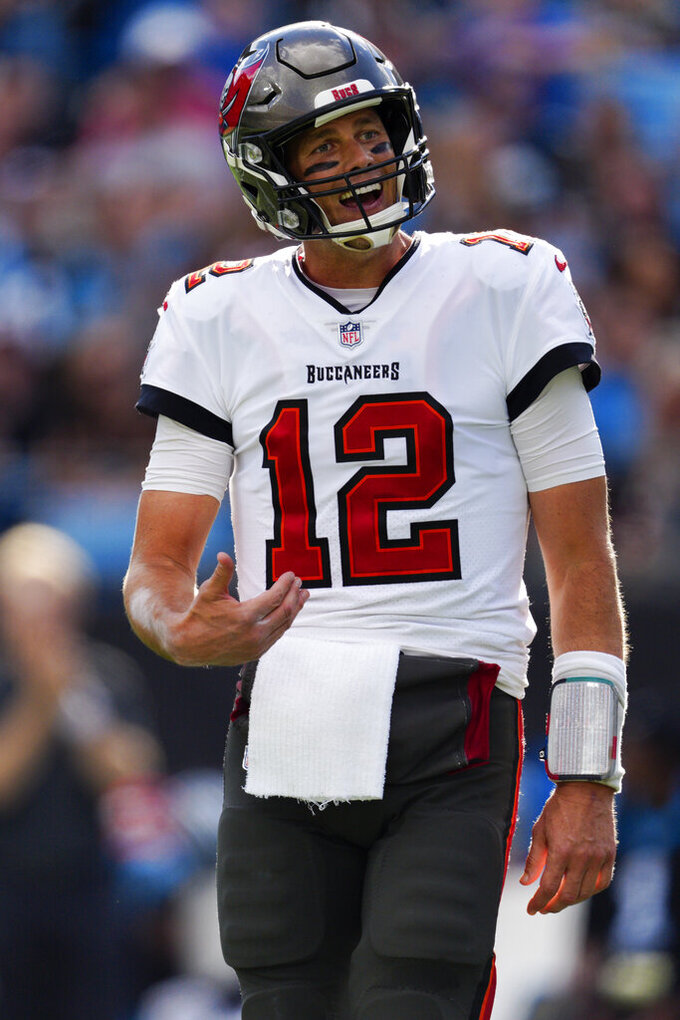 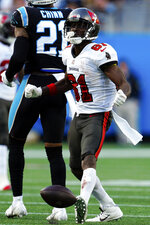 TAMPA, Fla. (AP) — Now that the Tampa Bay Buccaneers have won the NFC South, the defending Super Bowl champions are turning their attention to getting healthy while also pursuing the highest seed possible for the playoffs.

That means winning without taking unnecessary risks with injured players that are hoping to get back on the field.

With games remaining against the last-place New York Jets and Carolina Panthers, who the Bucs trounced 32-6 to clinch their first division title in 14 years on Sunday, the schedule is favorable for a strong finish.

“We’re 11-4. That’s not the greatest record in the world, but it’s certainly not the worst, either,” Brady said after Tampa Bay’s wrapped up its first NFC South crown since 2007.

“We’ve lost some tough games, and I think we’ve learned from each of the tough losses,” Brady added. “But everything’s ahead of us. ... We’ve got to finish these next two games really strong and then we’ll see where things stack up after that.”

A week after leading receiver Chris Godwin was lost for the year to a knee injury and Fournette and David wound up on injured reserve, Barrett left Sunday’s game against Carolina with what coach Bruce Arians described as a knee sprain.

“It’s not severe, but he’s probably out the rest of the regular season,” Arians said Monday. “Hopefully we’ll have him back for the playoffs.”

At 11-4, the Bucs share the second-best record in the NFC with Dallas and the Los Angeles Rams but currently are the No. 4 seed in the conference because the Cowboys and Rams hold tiebreakers over Tampa Bay.

Arians asked Sunday if he might be inclined to rest some of his starters now that the division has been decided.

“The last game maybe, if nothing would change,” the coach responded.

A defense that because of injuries has been at less than full strength most of the season hasn’t yielded a touchdown the past two weeks. Tamp Bay allowed three field goals in a 9-0 loss to New Orleans and two more field goals against Carolina. Granted, the Saints and Panthers haven’t been lighting up the scoreboard lately, but the Bucs have gotten healthier in the secondary and it’s beginning to show.

Arians called out the kicking game following the previous week’s loss to the Saints. Kicker Ryan Succop rebounded against the Panthers, going a season-best 4 for 4 on field goal attempts.

Receiver Antonio Brown returned from a three-game suspension for misrepresenting his COVID-19 vaccination status and showed one of the reasons the Bucs welcomed him back without hesitation: He’s productive when he plays.

In his first action since injuring an ankle on Oct. 14 at Philadelphia, Brown had 10 catches on 15 targets for 101 yards. His 23 games with 10-plus receptions are the most in the NFL since Brown entered the league as a sixth-round draft choice in 2010. His 46 100-yard games are the second-most over that span.

Difficult to find fault with much following a 26-point road win in which the defense had seven sacks and limited an opponent to 273 yards and no touchdowns. The Bucs, however, did give up a couple of big plays, including Sam Darnold’s 63-yard pass completion to Shi Smith, that marred an otherwise stellar performance.

Receiver Breshad Perriman was activated from the reserve/COVID-19 list Monday after sitting out the past two games. Meanwhile, Evans was placed on the COVID list, and Arians said wide receivers coach Kevin Garver tested positive earlier in the day.

Arians would not speculate on whether Fournette and David would be able to return from their injuries for the start of the playoffs.

“That’s still up in the air. We’ll see how they heal,” the coach said. “We’ve got our fingers crossed that they’ll be back, but we’re not going to rush it either.”

Brady looks for a season sweep of his former rivals from the AFC East, which he dominated during a two-decade run with New England. The Bucs face the Jets on the road Sunday. They’ve already defeated the Patriots, Dolphins and Bills.