Seahawks' Lockett shies away from attention after hot start 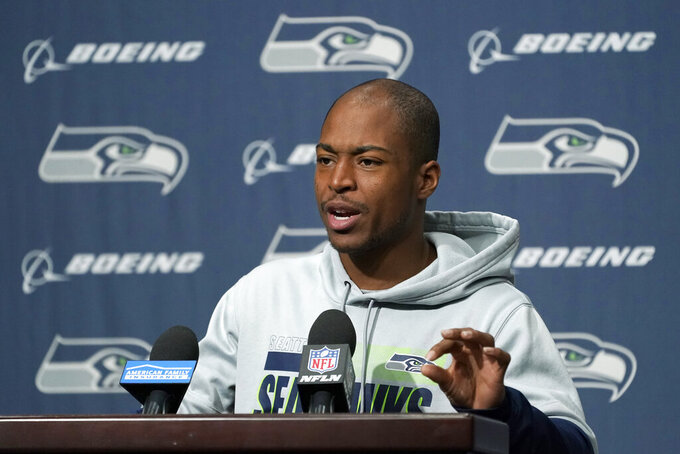 RENTON, Wash. (AP) — Tyler Lockett would have preferred to be anywhere else on Wednesday, rather than standing at the front of an auditorium talking about himself, the numbers he’s put up through the first two weeks of the regular season and the chance he has for more records this week.

The Seattle Seahawks wide receiver seems to prefer the feeling of being somewhat underappreciated even as he continues to put up huge numbers.

While he may not want the attention, he’s earned it over the first two weeks of the season. Lockett has 278 yards receiving and three touchdowns through the first two games, including long scores of 69 yards in Week 1 against Indianapolis and 63 yards last week against Tennessee where he nearly came to a stop, let two Titans defenders slide by, and outran the pair to the end zone.

Lockett is second in the league in yards — the top three are Deebo Samuel, Lockett and Cooper Kupp, all from the NFC West — and tied for second in TD catches.

Seattle’s offensive system makes it unlikely he'll be able to keep this up, but for now Lockett and his team are enjoying it.

“He has been kind of under the radar in a sense,” coach Pete Carroll said. "He’s doing pretty good. He’s been compensated really well. We know it. We recognize it. He’s doing just fine.”

Lockett could join another elite list with a big game this week against the Vikings. Per the Seahawks, only Moss (2007), Rice (1989), Marvin Harrison (1999) and Dwight Clark (1982) have had 100 yards receiving and a TD in three straight games to start a season.

Lockett said he feels in some ways like he’s back at Kansas State and that he has the freedom to run routes the way he did in college while still operating within the parameters of Seattle’s new schemes under offensive coordinator Shane Waldron.

That freedom and his longstanding connection with quarterback Russell Wilson have helped lead to the explosive start.

“I’ve been given a little more freedom to be able to do a lot of stuff that I did back in college. And I haven’t had that freedom like I used to,” Lockett said. “So now I’m just more comfortable and being able to do the stuff that I used to do because that’s how I always played.”

NOTES: Seattle WR Dee Eskridge did not practice Wednesday. Eskridge suffered a concussion in Week 1 against Indianapolis and was not cleared to play against Tennessee. ... Carroll said RB Rashaad Penny (calf) was unlikely to play against the Vikings barring an unexpected turnaround late in the week. ... Carroll was uncertain whether RT Brandon Shell would be available by Sunday. Shell suffered a sprained ankle late in the loss to Tennessee. Jamarco Jones would be the likely replacement.