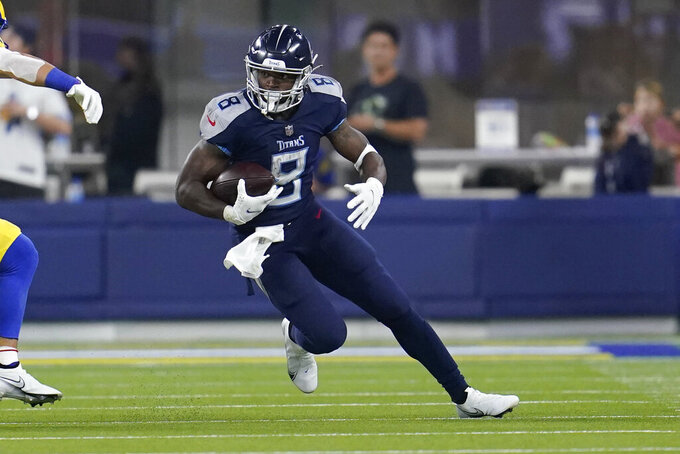 Tennessee Titans running back Adrian Peterson runs with the ball during the first half of an NFL football game against the Los Angeles Rams, Sunday, Nov. 7, 2021, in Inglewood, Calif. (AP Photo/Marcio Jose Sanchez)

RENTON, Wash. (AP) — Desperate for depth at running back, the Seattle Seahawks signed 36-year-old Adrian Peterson to their practice squad on Wednesday.

There’s no guarantee Peterson will be added to Seattle’s active roster ahead of Sunday’s game against San Francisco, but with Chris Carson out for the season, and Rashaad Penny and Travis Homer missing last Monday’s game with injuries, the Seahawks opted to add the veteran to bolster their depth.

“I gotta wait and see how he does out here,” Seattle coach Pete Carroll said. “I’ve watched the film and seen him play. He plays just as aggressive and tough as he ever has. So I’m anxious to see what he adds to the club, and he’s fired up about it too. So I don’t have anything specific to tell you until we get on the field and get working and that hasn’t happened yet.”

Peterson appeared in three games earlier this season for Tennessee following a season-ending injury suffered by Derrick Henry. Peterson started two games and had 27 carries for 82 yards and a 3.0-yard average per rushing attempt and one touchdown run.

His longest run of 16 yards came against Houston. Peterson was released by the Titans on Nov. 23.

Now in his 15th season, Peterson is a four-time All-Pro, seven-time Pro Bowl selection, was the 2012 league MVP and is likely bound for the Hall of Fame. Carroll joked he’s been trying to get Peterson on his teams back to his college days at USC.

“I’ve known him forever, all the way back to his high school days and I admired him tremendously over the years,” Carroll said. “Always disappointed we didn’t get him back in the day, but like I just told him we finally got him.”

Seattle is uncertain if Penny or Homer will be able to play Sunday against San Francisco, and starter Alex Collins has been bothered for several weeks by an abdominal injury.

Carroll was asked why bringing in an aging veteran was the best move, rather than giving a young player on the practice squad such as Josh Johnson an opportunity.

“We’re trying to get ready to win this football game so I’m going to see if Adrian has something to offer us,” Carroll said. “Just in his presence, in his toughness he brings something in. So let’s see what happens. We’re just trying to get the right mix.”

Seattle’s run game has been awful and a big part of the reason behind its offensive struggles. Seattle is averaging 4.2 yards per carry, but ranks 31st in the league in rushing attempts and 25th in yards rushing.

The Seahawks have failed to top 100 yards rushing in five straight games, the longest streak since a run of six straight games during the 2016 season.

Whether Peterson ends up contributing this week, the Seahawks run game should have a chance at better success if starting left guard Damien Lewis is able to play. Lewis missed last week with an elbow injury, but Carroll said they are expecting him to be able to play against the 49ers.