Sports betting may seem easy. It's not. Here's why 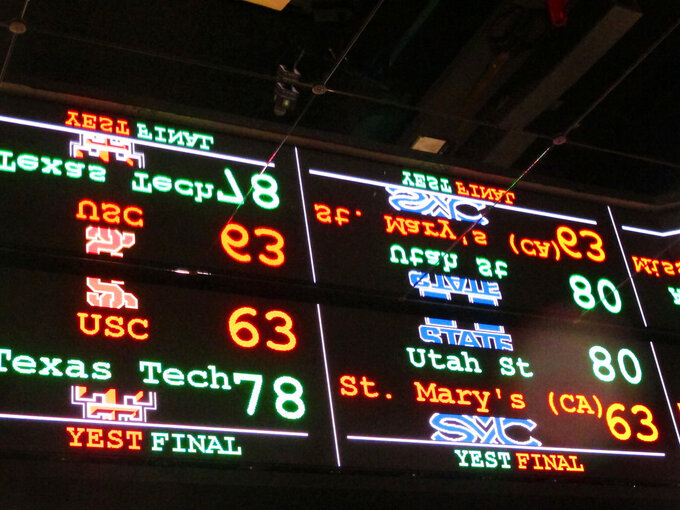 FILE This Nov. 20, 2018 file photo shows a scrolling video board with basketball scores reflected in the ceiling of the new sports book at Resorts Casino in Atlantic City, N.J. The race to legalize sports betting is on now that the U.S. Supreme Court has allowed it in all 50 states, but will it provide enough extra tax revenue to make much of a difference for schools, roads or pension debt? (AP Photo/Wayne Parry)

First, make sure you know what you're doing — and the odds against you.

Seven U.S. states now offer legal sports gambling, and as many as 30 more will consider jumping on board in 2019. So here are some of the basics — as well as some more esoteric aspects — of betting on sports.

The biggest difference between placing a legal sports bet with a casino or racetrack or their online affiliates and placing one with an illegal bookmaker or "bookie" is that with legal betting, you have to put your own money up first. Illegal bookies will let you bet on credit, the most appealing aspect of their illicit business and one that is expected to allow them to continue to operate, and perhaps still thrive, in the brave new world of sports betting.

Say you want to bet $25 on a football game legally. You have to hand the window clerk $25 and receive a ticket confirming your bet. In most cases, if you win, you will get back your original $25 stake plus your winnings, which won't amount exactly to another $25 because of ...

This is the vigorish, also known commonly as the "vig" or the "juice" — the bookmaker's cut of the action. Oddsmakers try to set betting lines as precisely as possible to attract an equal amount wagered on each team involved in a particular game. They use money from losing bets to pay off people who make winning bets, while keeping a percentage for themselves. That percentage varies, but usually is around 10 percent, so that a successful $25 bet would earn you a $22.50 profit.

One of the most popular ways to bet on sports is through the point spread. If the Seattle Seahawks are favored by 4 points against the Minnesota Vikings, Seattle must win by 5 for a Seahawks bettor to win his or her wager. Minnesota backers would win if the Vikings win, or even if they lose as long as it's by 3 points or fewer. A final margin of exactly 4 points for Seattle is considered a push, meaning the bets are refunded.

You can also do a money line bet that does not involve a point spread. Instead, simply choose the team you think will win. Oddsmakers set this money line ratio based on bets of $100, essentially telling gamblers how much they would win by betting $100 on an underdog, or how much they'd need to put up to win $100 on a favorite.

For a heavily favored team, say the Boston Red Sox putting their best pitcher against a weak opponent with a poor pitcher, that could involve putting up $350 of you own money to win just $100, a wager that would be listed in sports books as minus-350. Big underdogs pay off well, but only if that team wins the game. A bet on a team with a money line of plus-410 would give you a $410 profit on a $100 bet.

Another popular option is the over/under, also known as the total. Oddsmakers set a number for the total number of points scored by both teams combined, say 52 1/2 points between the Chiefs and Raiders. Gamblers bet whether the combined final score will exceed that number or fall short.

The catch here is that ALL bets in a teaser must win; if even one does not, the entire betting ticket is a loser. That's why they call it a "teaser," because it can seem so simple to manipulate the odds to where you want them, and yet there is a decent chance of losing the whole thing.

This is one of the places gamblers can get crazy. To boost the payoff on a bet, gamblers can string together a series of bets on multiple games, or multiple bets within the same game. This is called a parlay. It is a way to potentially win a lot of money for a small bet. But these bets are frequently losers. They are among the highest earning bets for sports books, because, as is the case with teasers, every one of the bets in a parlay has to win, or else the whole ticket is a loser.

Hang around gamblers long enough and you'll inevitably hear a story about how someone missed a big parlay payout thanks to a tiny margin on a single game.

There are also tons of other things to bet on, including so-called proposition or "prop" bets on things that might happen during games. You could bet on whether Kansas City Chiefs quarterback Patrick Mahomes or New England Patriots quarterback Tom Brady will have more passing yards or touchdowns in a particular game or set of games. You can bet on whether a particular team will be leading after the first quarter or at halftime, whether there will be a safety or whether any field goals will be missed.

There are also futures bets, which are wagers on things that won't happen for a while. You can bet on the winner of a particular sport's championship before the season starts or at any point during the season and predict whether a team will win more or less than a predetermined number of games. Similarly, you can also gamble on who will be voted most valuable player in the NFL or Major League Baseball.

Almost no one expected the Miami Dolphins to beat the Patriots on Dec. 9, a game in which New England was favored by 7 1/2 points. But an improvisational pass and running sequence that saw Miami players toss the ball to one another en route to the goal line led to a game winning touchdown as time expired. It happens, folks, a lot more than one might think.

Big favorites inexplicably lose. Underdogs with seemingly no shot rise up unexpectedly (the Buffalo Bills were 17-point underdogs against the Minnesota Vikings on Sept. 23, yet won the game 27-6.) Games that appear set for high-scoring shootouts end as low-scoring affairs. A star quarterback or running back gets injured early in a game and never returns.

What starts out as fun can easily become a problem for some people. Help is available for those with a gambling problem, or who fear they might be in danger of developing one, by calling 1-800-GAMBLER.