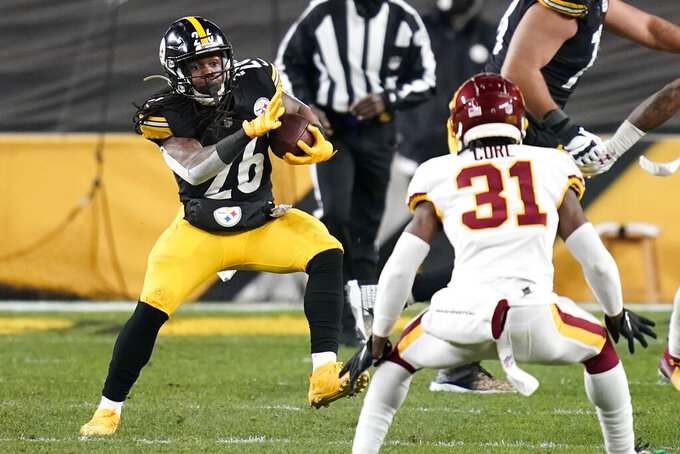 COLUMBUS, Ohio (AP) — After the Pittsburgh Steelers lost two in a row and looked bad doing it, their Monday night matchup with the last-place Cincinnati Bengals is suddenly more important than it looked on the schedule just a few weeks ago.

By virtue of rolling through the first 11 games of the season without a loss, Pittsburgh (11-2) already has clinched its first playoff berth since 2017. But a win over the Bengals (2-10-1) — or a loss by Cleveland on Sunday — would assure the Steelers of an AFC North title and at least one home playoff game at Heinz Field.

The Browns are two games back in the division and the Baltimore Ravens are three back with three games to play. Buffalo (10-3), which beat Pittsburgh last week, is challenging the Steelers for the No. 2 seed in the AFC.

With a game against the Colts (9-4) and a season-ender with the Browns (9-4) ahead, the suddenly struggling Steelers need to take advantage of the toothless Bengals.

Pittsburgh’s offensive and defensive lines were pushed around at times by the Bills in the 26-15 loss last week. Ben Roethlisberger threw two touchdowns but also had two interceptions, one of them a tide-turning pick-6 late in the first half.

The Bengals are playing out another disappointing season. They fumbled the ball away on each of their first three possessions against the Dallas Cowboys last week to fall into a 17-0 first-half hole on the way to a 30-7 loss.

Cincinnati has lost five straight. Three of them have come since rookie quarterback Joe Burrow was hurt on Nov. 22, the most high profile of a multitude of injuries that hampered the team.

Quarterback Brandon Allen, who has started the past three games, suffered a knee injury against the Cowboys. He didn't practice Thursday, and is day to day. If he can't go, Ryan Finley will get the start.

Safety Jessie Bates, one of the leaders of the Bengals defense, said the last three games of a lost season will be a chance to see the character of some of his teammates.

“Good opportunities to see who belongs here on this team and who doesn’t. We’re still playing. People still have to play well to stay around. It’s three great opportunities," he said. "In these hard times, you really figure out who you can count on.”

JUJU ON THAT LOGO

Steelers wide receiver JuJu Smith-Schuster drew Buffalo’s ire when he filmed himself dancing on the Bills’ midfield logo last week. It’s a pregame ritual Smith-Schuster started earlier this year, calling it a way for him to connect with his 2.6 million followers on the social media app TikTok.

Even though Buffalo didn’t care for it, Smith-Schuster says he’s not going to change.

“I plan to keep on doing (the dances),” Smith-Schuster said. “I’m just having fun, being myself.”

“He's still young-minded,” Bell said of the 24-year-old receiver. “But, you know, he loves the game, he loves going out there and playing. But it's kind of disrespectful at the end of the day.”

The Steelers began the season with the kind of run-pass balance most teams envy. Not so much anymore.

Pittsburgh has topped 50 yards rushing just twice over its past seven games, allowing defenses to put more focus on shutting down the Steelers’ short passing game.

It doesn’t seem to matter who is back there for the Steelers, whether it’s James Conner, Benny Snell, rookie Anthony McFarland Jr. or even Jaylen Samuels, who saw nearly as many touches against the Bills (seven) as he had on the season combined (nine).

After usually dependable kicker Randy Bullock missed his last three of five field-goal attempts and a PAT, the Bengals decided it was time for a change.

Bullock was a healthy scratch last week against Dallas, with Austin Seibert — claimed off waivers from the Browns in September — moving into the No. 1 spot. Seibert converted his only extra-point attempt and didn't played get a field-goal try last week, so coach Zac Taylor is planning to go with him again against the Steelers.