Steelers optimistic Watt's status will be resolved by Sunday 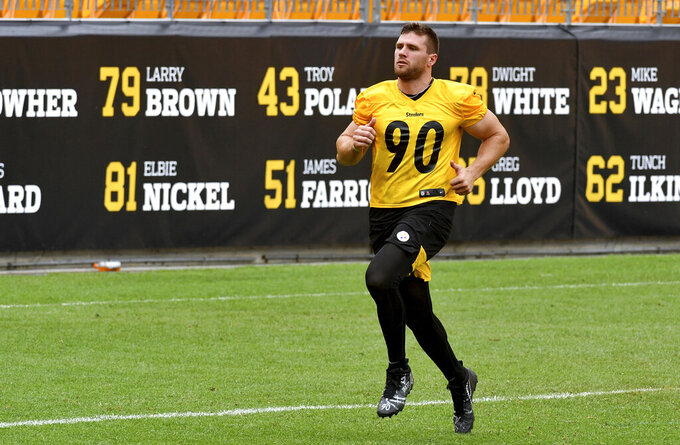 PITTSBURGH (AP) — Pittsburgh Steelers coach Mike Tomlin is hopeful All-Pro outside linebacker T.J. Watt will be available when the defending AFC North champions open the season on Sunday in Buffalo.

The three-time Pro Bowler is entering the final year of his contract and negotiations on a possible extension are ongoing. Watt didn't play during the preseason and did not participate in 11-on-11 drills during training camp.

Tomlin said Tuesday he's working under the assumption that Watt's status will be resolved this week. Tomlin said he expects Watt to “work” with the team on Wednesday, but did not elaborate if that will include Watt participating in the contact portions of practice for the first time since a playoff loss to Cleveland in January.

“Like the rest of our organization, I’ve been optimistic about this process running its course,” Tomlin said. “And so because of that optimism, I’m anticipating quality play for him this weekend and beyond.”

The 26-year-old Watt has been a fixture in the starting lineup since being taken with the 30th overall pick in the 2017 draft. He has 49 1/2 sacks over the first four seasons of his career, the sixth-highest total over that span by any player since the sack became an official statistic in 1982.

The Steelers do not negotiate with players once the season begins, though it is typical for them to wait until the eve of the season opener to iron out new deals for players they consider franchise cornerstones. Pittsburgh awarded longtime defensive lineman Cam Heyward a four-year contract just a week before the start of the 2020 season.

Tomlin is not concerned about Watt's decision to hold himself out of contact drills, pointing out that Los Angeles Rams star Aaron Donald used a similar tactic while working on a new contract and picking up right where he left off when the situation was resolved.

“I think guys like (Watt and Donald) routinely do what others can’t,” Tomlin said. “And so I kind of have that perspective on on his readiness and the anticipated quality of his play. I’ve just been in this game so long at this level, I’m so used to seeing uniquely talented people rise up in the face of adversity or circumstance and exceed it.”

If Watt is limited, the Steelers will have Melvin Ingram available. Pittsburgh signed the nine-year veteran to a one-year deal in July.

“The things that have gone on with T.J. really gave (Ingram) an opportunity to acclimate himself to what it is we’re doing (and to) also do it with the first group and get reps with that group,” Tomlin said. “So I’m really excited about his preparedness.”

Tomlin said he expects everyone on the 53-man roster to be available for the opener. He's unclear, however, when the three players put on injured reserve last week — defensive lineman Stephon Tuitt (knee), right tackle Zach Banner (knee) and running back Anthony McFarland Jr. (unspecified) — will be available. All three will miss at least the first weeks of the season.

Tomlin believes Banner will be back “sooner rather than later” in his recovery from a torn ACL suffered in last year's season opener against the New York Giants. The injury forced Pittsburgh to shift Chuks Okorafor from left tackle to right tackle, making rookie fourth-round pick Dan Moore Jr. the lineman tasked with protecting quarterback Ben Roethlisberger's blind side.

It's a task Tomlin thinks Moore can handle based on what he saw during training camp.

“You know, he’s developed a lot,” Tomlin said of Moore. “But I’d be remiss if I didn’t say that he probably came with more than we anticipated. You know, he’s gotten better throughout the course of this, but I think his floor was higher than anticipated, at least from my perspective.”