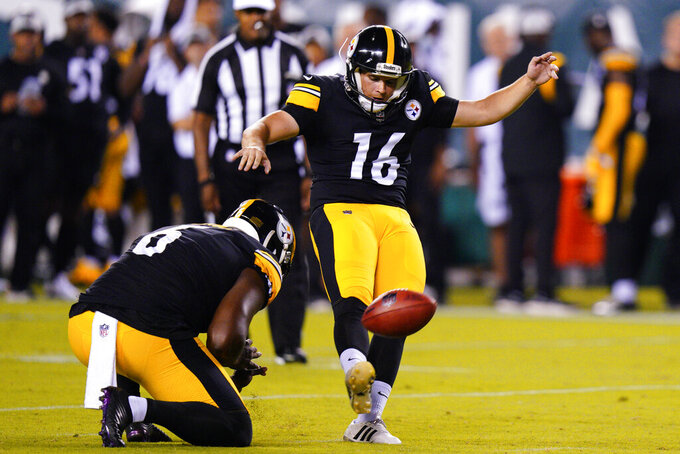 PHILADELPHIA (AP) — Dwayne Haskins got advice from his QB coach to play like a jazz player.

“Jazz is real smooth. The blues. You bop your head, snap your fingers,” Haskins said.

Haskins hit all the right notes in his push for the backup quarterback spot, throwing for 161 yards and a touchdown to lead the Pittsburgh Steelers to a 24-16 win over the Philadelphia Eagles on Thursday night.

Ben Roethlisberger sat out Pittsburgh’s second preseason game. Mason Rudolph has been the team’s backup for the past three seasons and just may keep that job. Haskins, though, is giving Rudolph a bit of a push in his attempt at winning the backup spot.

Steelers coach Mike Tomlin said Haskins was “very much in command of his play.”

Haskins, Washington’s 2019 first-round draft pick, said quarterbacks coach Mike Sullivan gave him the jazz player advice. Haskins said he's “still learning, still trying to figure out the guys.” Haskins, who said he's having his most fun since he starred at Ohio State, knows the next step is taking snaps with the first team against the first-team defense

“If that happens, I just want to be ready for it,” he said. “If I get that opportunity, I want to make the most of it.”

The Steelers got a boost during the game when they agreed to acquire linebacker Joe Schobert from the Jacksonville Jaguars, according to a person familiar with the deal. The person spoke to The Associated Press on condition of anonymity Thursday night because neither side had formally finalized the deal.

The Steelers needed depth at inside linebacker following the surprise retirement of veteran Vince Williams just before training camp. Williams’ departure left Pittsburgh with Devin Bush and Robert Spillane as starting inside linebackers and little experience behind them.

Eagles coach Nick Sirianni made his debut on the sideline, replacing Doug Pederson. Pederson was fired in January, less than three years after he led the Eagles to the franchise’s only Super Bowl title.

Sirianni turned 40 in June and is Philadelphia’s youngest head coach since Dick Vermeil in 1976. This was his first game in charge at any level,

He has a young QB leading the way in Philly. Jalen Hurts played two series and was a modest 3 of 7 for 54 yards. He hit tight end Zach Ertz over the middle for 34 yards and had receivers drop passes on his next two attempts.

Hurts, a second-round draft pick last year, was 1-3 with an injury-depleted team that finished 4-11-1. He completed 52% of his passes for 1,061 yards and six touchdowns with four interceptions. He also ran for 354 yards and three TDs.

Hurts has not officially been made the starter, even though he took every first-team snap in practice and got the preseason start.

“I wanna complete every pass, throw a TD every time I’m on the field, so the competitor in me is like, damn, but it was a good day," Hurts said. “I could be more efficient. I’m never satisfied.”

Joe Flacco, who threw 25 touchdown passes against the Steelers in his 11 seasons with the Baltimore Ravens, hit Quez Watkins for a 79-yard touchdown and a 10-0 lead. Flacco, signed to play behind Hurts, was 10 of 17 for 178 yards and the touchdown.

Jake Elliott kicked two 47-yard field goals and a 50-yarder for the Eagles.

Nick Mullens, Philadelphia's third QB, had a pass picked off by Justin Layne in the third quarter. Jaylen Samuels scored from 1-yard to give the Steelers a 21-16 lead.

CALL TO THE HALL

Offensive linemen Jon Runyan and Tra Thomas are this year’s selections for the Eagles Hall of Fame. They will be inducted Oct. 14, when the Eagles host the Tampa Bay Buccaneers. Runyan and Thomas started a franchise record 134 regular-season games together from 2000-2008. During that stretch, they helped lead the Eagles to seven playoff appearances, five division titles, five conference championship game appearances, and a berth in the Super Bowl.

The Eagles host the Patriots next Thursday.