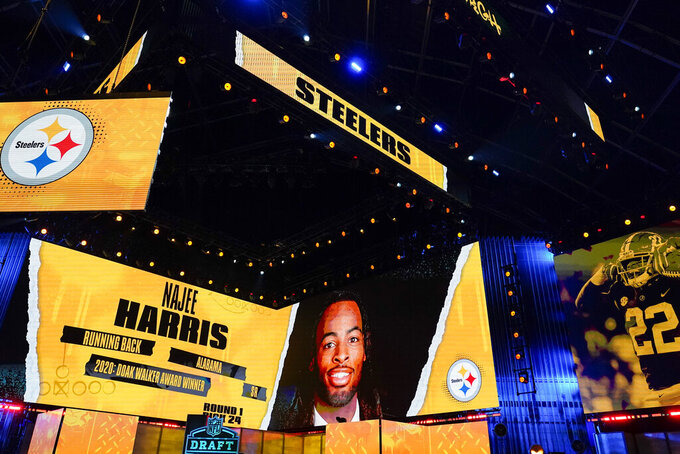 Images of Alabama running back Najee Harris are displayed after the Pittsburgh Steelers made him the 25th pick in the first round of the NFL football draft, Thursday, April 29, 2021, in Cleveland. (AP Photo/Tony Dejak)

PITTSBURGH (AP) — The conversation was short. Maybe because there really wasn't a reason to have one.

The Pittsburgh Steelers were on the clock. Alabama star Najee Harris was available. During an opening round of the NFL draft that lagged at times, the Steelers practically made NFL Commissioner Roger Goodell sprint to the podium.

The sooner the Steelers could bring Harris into the fold — and more importantly, into the backfield alongside quarterback Ben Roethlisberger — the better.

Pittsburgh is turning to the explosive Harris to give the NFL's worst running game a jolt while simultaneously providing Roethlisberger with another playmaker in the huddle in what could be his final season.

The Steelers selected Harris with the 24th overall pick Thursday night, confident he can help a rushing attack that finished 32nd in the NFL in yards rushing in 2020.

“I mean, I understand they did finish last in rushing last year,” Harris said. "But ... I’ve been put in a lot of situations ... I feel like it’s nothing I can’t do in time for sure.”

Unlike at Alabama, Harris likely won't have to wait around for his opportunity in Pittsburgh. The running game has been erratic at best since Le'Veon Bell's All-Pro season in 2017. James Conner had trouble staying healthy in four seasons before leaving in free agency earlier this month. Benny Snell was erratic at best last season and Anthony McFarland Jr. saw little playing time.

Rather than use their top pick on an offensive lineman after losing three starters in retirement or free agency, the Steelers instead made Harris the first running back they've selected in the first round since Rashard Mendenhall in 2009.

“We were ecstatic he was there and we took him quickly with little to no dialogue,” coach Mike Tomlin said.

Maybe because Harris' actions during his four years at Alabama spoke so loudly.

The 6-foot-1, 232-pounder ran for 3,843 yards and 46 touchdowns in four seasons with the Crimson Tide, including 26 last fall while helping Alabama to the national title. He also evolved into a capable receiver out of the backfield, catching 43 passes for 425 yards and four touchdowns as a senior.

It's a year Harris felt he owed himself after what he considered a subpar 2019, at least by his own high standards. So rather than enter the 2020 draft, he opted to return for one more run with the Crimson Tide, becoming a star on a team full of them in the process.

The Steelers could use some

Pittsburgh is looking to maximize whatever time left it has with veteran quarterback Ben Roethlisberger. The 39-year-old restructured his contract to ensure he would be back for an 18th season and Harris provided the opportunity to grab a player who could make an immediate impact.

The Steelers went 12-5 last year but wilted down the stretch, dropping five of their final six, including a blowout loss to Cleveland in the opening round of the playoffs. A running game that consistently sputtered allowed defenses to tee off on Pittsburgh's short passing game.

Harris believes he can help in more ways than one. Sure, he can carry a heavy workload out of the backfield — he ran it 251 times last season alone — but he considers himself a wide receiver, too. His pedigree isn't that much different than Bell, who arrived in Pittsburgh in 2013 after serving as a workhorse at Michigan State.

Bell quickly became one of the NFL's best all-around backs. Harris will have the chance to make the same leap.

“They added more games on,” Harris said, referring to the NFL expanding the regular season to 17 games. "Now we’re playing more games so I feel like you need someone who can carry the load for sure.”

Putting in the work comes naturally to Harris. He survived a turbulent childhood in the Bay Area in California, including a stint at a homeless shelter. On Thursday, he spent a portion of his day at the shelter hanging out with kids and reminding organizers that while he might be heading east, he never plans to forget his roots.

Roots that will now extend to a team with a rich history at the position he plays. It's a history Harris is aware of — he's well-versed in the careers of Hall of Famers Franco Harris and Jerome Bettis — and one he's eager to add to even if he waited a little longer than he anticipated to hear his name called by Goodell.