Super Bowl 53 on TV: A viewer's guide to Sunday's game 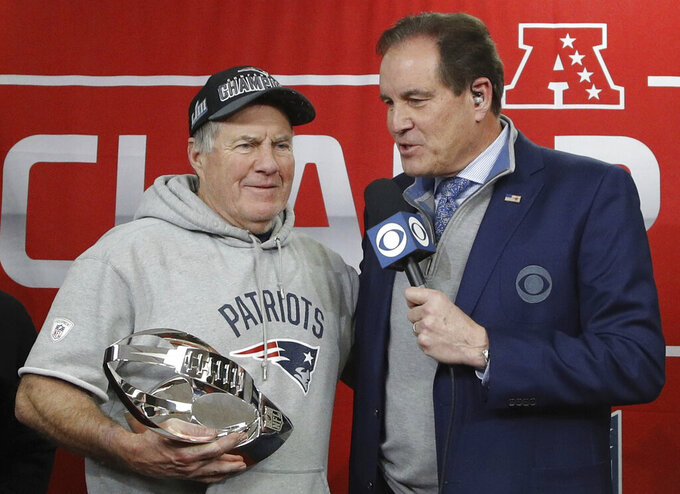 Here are some things to know about CBS' coverage as well as other Super Bowl-related programming on other networks:

This marks the 20th Super Bowl broadcast for CBS, which gives them the lead among all networks. NBC is next with 19 followed by Fox (eight) and ABC (seven). CBS and NBC both aired the first Super Bowl.

Jim Nantz will call his fifth Super Bowl, which ties him with Joe Buck for fifth among play-by-play announcers to call the game (Pat Summerall holds the record with 11 for CBS and Fox). Tony Romo, who is in his second year with CBS, becomes the 23rd analyst to call the game. Gene Steratore will be the rules analyst after being the referee in last year's Super Bowl. Reporters Tracy Wolfson, Evan Washburn and special teams analyst Jay Feely will be on the sidelines for their second Super Bowl.

CBS will use 115 cameras, including multiple 8K cameras in the end zone and 16 with 4K capabilities. The cameras producer higher resolution images for critical plays such as turnovers or if a player remains inbounds. They could come in handy if there is another situation similar to the AFC championship game when the camera tried to zoom in during a replay to determine if New England's Julian Edelman touched the ball during a punt return.

By comparison, CBS' broadcast of the Super Bowl in 1972 had 15 cameras. There will be more than three times that amount (50-plus) in both end zones on Sunday.

Jim Rikhoff has been part of the production team for the past six Super Bowls on CBS, but this will be his first as the lead producer. Mike Arnold is the lead director for the fifth time.

The average audience for the playoffs is up 12 percent over last year. But will that translate into an increase for the Super Bowl?

Last year's game on NBC between the Philadelphia Eagles and Patriots averaged 103.4 million, which was a 7 percent drop from the 2017 game between Atlanta and New England. The record is 114.4 million for the Super Bowl between Seattle and New England in 2015, which was also on NBC.

"The Super Bowl Today" comes on at 2 p.m., leading into kickoff at 6:30 p.m. This will be the ninth Super Bowl pregame host assignment for James Brown and his fifth for CBS.

Segments include a look at Atlanta's music scene, interviews with both quarterbacks and coaches, and an interview with President Donald Trump from CBS News.

ESPN's "Postseason NFL Countdown" will go on the air at 10 a.m. for four hours.

For those with pregame fatigue, the Puppy Bowl kicks off on Animal Planet at 3 p.m.

FOR THE CORD CUTTERS

DirecTV Now, Hulu, YouTube TV and fuboTV all have CBS. PlayStation Vue has CBS but only in select markets.

For those who don't subscribe to a streaming service, it will be available on the CBS Sports and NFL websites.

ESPN Deportes will have the Spanish-language broadcast. It will also be streamed on the ESPN App.

After CBS' broadcast ends, the CBS Sports Network will have an expanded version of "The Super Bowl Today Postgame Show". ESPN and NFL Network will also have postgame shows.