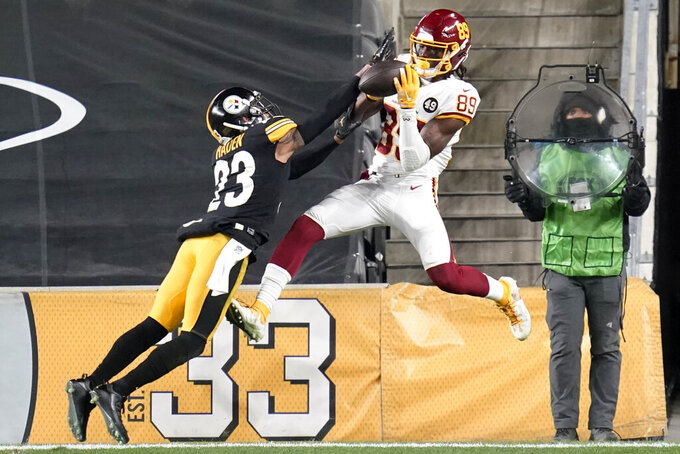 PITTSBURGH (AP) — The Pittsburgh Steelers spent three months shaking off whatever 2020 threw at them. Schedule changes. Injuries to a handful of impact players. The ever-present threat of COVID-19.

Through the chaos, they kept winning. Sometimes pretty. Sometimes ugly. Sometimes a little of both in the same game. Through it all, they insisted they were well aware of their flaws. pointing out time and again the only thing perfect about them was their record.

Alex Smith threw for 296 yards and a touchdown, Dustin Hopkins kicked a tiebreaking 45-yard field goal with 2:04 remaining, and Washington rallied for a 23-17 victory on Monday in one of the biggest surprises of the NFL season.

“We’ve been down for such a long time and we’re trying to rebuild ourselves and build up,” first-year coach Ron Rivera said. “This is something we can build off of.”

The Steelers (11-1) missed a chance to clinch a playoff berth and dropped into a tie with defending Super Bowl champion Kansas City for the best record in the AFC with four weeks remaining. They squandered a 14-point lead.

“It stinks,” Pittsburgh quarterback Ben Roethlisberger said. “Been a while since we lost a game. It's not a good feeling.”

The Steelers were 10-point favorites while facing a team that hadn't won three straight since 2018 and hadn't won in Pittsburgh since 1991. Washington won the Super Bowl that season. The club's expectations this year are far more modest. Yet a day after the New York Giants won at Seattle, Washington (5-7) kept pace while giving the lowly NFC East its second marquee victory in 25ish hours.

“We’re on a roll,” said defensive end Montez Sweat, who knocked down three Roethlisberger passes. “This is the kind of football we’ve been wanting to play since Game 1.”

It's the kind of football the Steelers had played since Game 1. The best start in the franchise's 87-year history came to an abrupt halt on a rare Monday late afternoon game. The NFL pushed the contest back a day as part of the fallout from a COVID-19 outbreak in Baltimore that forced the league to postpone the Ravens' visit to Heinz Field three times.

Pittsburgh coach Mike Tomlin insisted his club would not use the disruption as an excuse. But the weight of what the Steelers have been dealing with, combined with second-half injuries to inside linebacker Robert Spillane and cornerback Joe Haden, made for a tough day.

Roethlisberger passed for 305 yards and two touchdowns, but was picked off by Jon Bostic — a former Steeler — with 1:59 remaining. Hopkins added another 45-yard field goal and Pittsburgh's last-gasp drive ended with the ball near midfield and Washington's players sprinting off in celebration while the Steelers trudged to the locker room.

“We're getting to that point of the season when you've got to be sharp in all areas, your whole team, both sides of the ball,” Roethlisberger said. “There can be all kinds of distractions, changes of this, that and the other. At the end of the day, we've got to go play good football.”

For the first time in a long time, the Steelers didn't. At least not enough of it.

Still, even after Smith hit Logan Thomas for a 15-yard touchdown pass to tie the game at 17, the Steelers had a chance. They drove into field goal range but rather than have fill-in Matthew Wright — promoted from the practice squad due to an injury to Chris Boswell — attempt a 45-yard field goal into the open end at Heinz, the Steelers went for it. Roethlisberger's heave to rookie running back Anthony McFarland Jr. fell incomplete and Smith calmly drove Washington 45 yards in nine plays to set up the winning score.

“I didn't feel good about putting that (kick) on him," Tomlin said of Wright.

BLOOD IN, BLOOD OUT

Smith's return from a right leg injury that nearly cost him his life has made him a lock for the NFL's Comeback Player of the Year. In the first half, Smith's left leg got some attention after he was stepped on.

“You get stepped on a bunch as a quarterback, especially that front leg,” Smith said. “You get used to it. You get numb to it. Looked down ... (you could) visually see the blood pumping out. Never had one gush like that. New for me.”

Smith remained in the game, his bloody sock giving his nearly all-white uniform a splash of color.

Steelers: Spillane, who inherited the inside linebacker job when Devin Bush's season ended with a knee injury in October, went to the locker room in the third quarter with a knee injury. Haden left in the fourth with a possible concussion.

Washington: Travels to Arizona next week to take on the San Francisco 49ers in a game relocated due to COVID-19 restrictions in Santa Clara, California, the site of Levi's Stadium.

Steelers: Face a stiff test next Sunday night in Buffalo. The Bills beat the Steelers — minus Roethlisberger — 17-10 at Heinz Field last December to lock up a playoff berth.