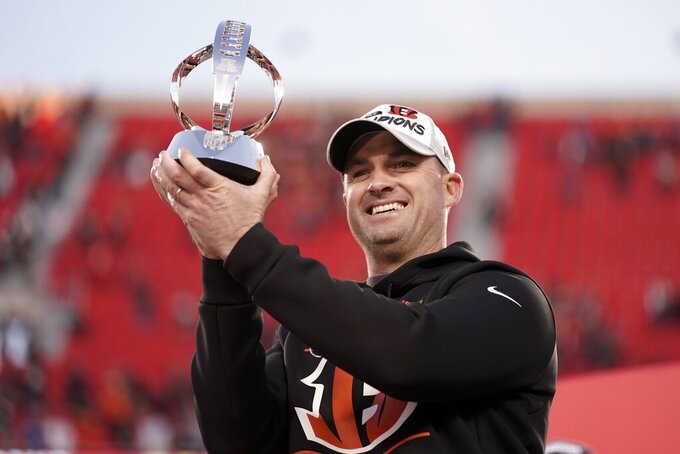 Zac Taylor's path to a head coaching gig was cleared the moment he joined Sean McVay's staff with the Los Angeles Rams five years ago.

Well, maybe it wasn't actually until the two sat down together in the team cafeteria.

“I think the joke is if you had a cup of coffee with Sean McVay, then you’re going to be a head coach in the NFL,” quipped Taylor, in his third season as coach of the Cincinnati Bengals and preparing to face McVay's Rams in the Super Bowl.

“And there’s a ton of truth to that,” Taylor added. “Because if you spend time around the guy, he gives you a ton of confidence in yourself.”

That's the reputation McVay has built in league circles since becoming the youngest head coach in NFL history — at just 30 years old — when he was hired by the Rams in 2017.

McVay has since taken Los Angeles to the Super Bowl twice, and done it with a tenacious work ethic along with an orderly — yet energetic — approach. And he operates with humility and respect, traits that have rubbed off on those who have worked for McVay.

“He’s really shown a lot of young guys that you can do it in your own way,” Taylor said. “It doesn’t have to be the way it’s always been done for the last 20 years around the league. There can be a different way of doing things, and so I think that we all saw that from Sean. He was very open about how he did things, why he made certain decisions.

"And so that has allowed myself and a lot of other guys to go off and feel very comfortable leading a team because of the impact he made on all of us.”

When the Rams and Bengals square off in Los Angeles’ SoFi Stadium on Feb. 13, it will be a showdown between buddies. It will also mark the first time both Super Bowl teams are guided by coachesen under 40 — with Taylor 38 and McVay 36.

“I’m glad we’re going against each other, but we’re going to do everything in our power to try to finish this off,” McVay said with a smile. "And I know he feels the same way."

Still, McVay refuses to take credit for this new wave of NFL coaches.

“I almost think it’s a little ridiculous when you talk about the ‘tree’ because these guys are co-workers where we positively pour into one another," McVay said. "I just happen to be in the role that I’m in. But whether it’s Kevin, Brandon Staley, Zac Taylor, Matt LaFleur, I learned more from them than those guys have from me.

“I think they’ve been instrumental parts of a lot of the things that have been right.”

When McVay was hired by the Rams, he sought coaches who shared his vision and could help him turn around a franchise mostly wallowing in mediocrity for a dozen years.

“Working for Sean was the best two years of my life," Taylor said. “It was fun. You loved coming into the building.”

By then, Taylor had established himself as one of the NFL's top young offensive coaches — and the Bengals tabbed him as their head coach. They were hoping he could orchestrate a similar turnaround in Cincinnati.

Taylor's Bengals went 2-14 in his first season and 4-11-1 last season, with whispers about his suddenly tenuous job security starting to circulate.

Then came a massive turnaround with the Bengals going 10-7 this season before winning playoff games against the Raiders, Titans and Chiefs — the last two on the road — to reach the franchise's first Super Bowl in 33 years.

“It’s awesome," McVay said. "Zac’s a great coach. I think the resilience, the mental toughness, the things that they’ve gone through to get to this point is great. I think it’s such credit to his leadership.

“I love Zac Taylor. I’m so happy for him. I think that team plays with a swagger and a confidence similar to the way Zac carries himself. He’s so steady. He’s always so neutral.”

McVay acknowledges that last part might be the one major difference between the two coaches.

"He’s probably more calm than I am,” a smiling McVay said.

Maybe it's all those cups of coffee.

“People joke about that saying, but there’s so much truth to that,” Taylor said. “But I think for all the right reasons because he does a great job of empowering his staff and telling you the why of everything. And it certainly has impacted me here in Cincinnati.”