Three picks? That's all the Seahawks have for unusual draft 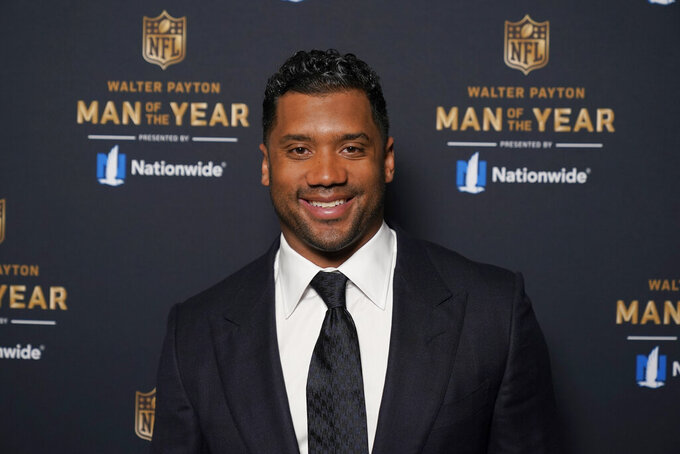 FILE - In this Friday, Feb. 5, 2021 file photo Seattle Seahawks quarterback Russell Wilson poses for a photo at the NFL Honors ceremony as part of Super Bowl 55 in Tampa, Fla. Wilson will return to N.C. State University, where he played football and baseball, this spring as a commencement speaker for the 2021 graduation ceremonies. (AP Photo/Charlie Riedel, File)

RENTON, Wash. (AP) — For a front office that in the past has horded draft picks as though they needed a reality television show intervention, this is a decidedly different NFL draft upcoming for the Seattle Seahawks.

Three picks. That’s it. A measly, boring, how-can-you-make-your-team-better three picks is all the Seahawks are currently scheduled to have when the draft starts on April 29.

The first day will likely be an absolute bore for the Seahawks and their fans with their first-round pick shipped off to New York as part of the deal that brought Jamal Adams from the Jets. The second day — just one selection at No. 56 in the second round.

And the final day, where Seattle has found so much past success unearthing a trove of late draft gems in the past? Just twice are the Seahawks scheduled to be called upon — once in the fourth round and again in the seventh round.

It’s a strange, odd circumstance for a team that's made at least eight picks in every draft since general manager John Schneider and coach Pete Carroll arrived in 2010. It also highlights the approach Seattle has taken in viewing this year’s draft class. Rather than making offseason moves to find more draft capital, the Seahawks seemed more focused on free agency through a mix of finding pieces to fit their system and retaining their own free agents.

Clearly, this was not going to be the year Seattle tried to replenish its roster through the draft.

That being said, there are positions of concern for the Seahawks. They need another wide receiver — or two — still. They could use another cornerback. And trying to find another starter on the offensive line would seem prudent now and for the future.

Maybe no position group on Seattle’s roster is currently a bigger unknown than cornerback. Shaquill Griffin is gone to Jacksonville. Quinton Dunbar is now in Detroit. Seattle did grab Ahkello Witherspoon from San Francisco to pair with presumptive starter D.J. Reed.

But coming out of the draft with one more option to add depth to the position would seem to be a top priority, short of the Seahawks going down the path of a reunion with former All-Pro Richard Sherman. The likes of Kentucky’s Kelvin Joseph, Syracuse’s Ifeatu Melifonwu and Georgia’s Eric Stokes all fit the profile of Seattle’s cornerbacks of the past and are likely to still be available come the second round.

In case you missed it, Russell Wilson made some news this offseason. The Seahawks quarterback was clear he wanted upgrades on offense, specifically with his protection on the offensive line.

Seattle did make one substantial move landing guard Gabe Jackson in a trade with Las Vegas, but there appears to be an opportunity for the Seahawks to seek additional options at either guard or center. Ethan Pocic is a serviceable center, but finding another center or a guard that would allow Damien Lewis to move to center would seem to be on Seattle’s agenda.

Another offensive line priority could be finding an eventual successor to Duane Brown at left tackle. Brown is 36 and entering the final season of his deal with the Seahawks.

Whether in the draft or in the next wave of free agency that follows later this spring, the Seahawks must find another wide receiver. Seattle lost David Moore and Phillip Dorsett in free agency and outside of Freddie Swain do not have another proven option on its roster behind starters DK Metcalf and Tyler Lockett.

Seattle has four other wide receivers signed to futures contracts but those four have a combined three receptions in the NFL. Fortunately for Seattle, this appears to be a deep draft at wide receiver with a bevy of options likely available in the middle rounds.

Is this the year the Seahawks finally draft a quarterback? They have selected just one — seventh-rounder Alex McGough in 2018 — during Wilson’s tenure, but it’s clear there is some acrimony between the starting QB and the franchise that could lead to a separation in the future. With only three picks, there are more pressing needs, but the Seahawks could be tempted to take a late-round flyer on someone such as Felipe Franks or Jamie Newman as a developmental option.